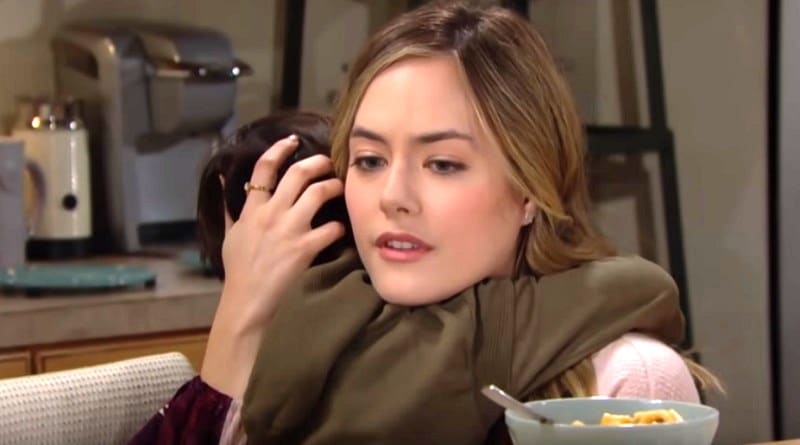 The Bold and the Beautiful Two Weekly Spoilers: Thomas To Propose Zoe? Hope And Douglas To Be Shocked

The Bold and the Beautiful Spoilers for the upcoming two weeks promise a lot of Drama. While many people are after Thomas, he is succeeding in everything. Thomas will do something that will shock not only Hope but even his poor kid Douglas. Zoe might take all the things people are saying about her boyfriend into account. Here are all the details about these upcoming storylines-

The Bold and the Beautiful Spoilers: Thomas Is On Everyone’s Hit List

The bold and the Beautiful spoilers reveal that Thomas Forrester is on almost everyone’s hit list. On top of the list is Brooke Logan. She is accusing him of using Zoe to get back to Hope. Of course, the man will deny it, but thats that. Another one is Liam Spencer. Liam is also trying to take on to Thomas. Liam is more than sure that Thomas is conning Hope. He is correct, but no one is paying attention to what he is saying. To prove his point, he goes on to talk to Zoe and put some sense into her. However, none of that will work as the woman has fallen for Thomas. Despite so many people talking aim, it looks like he will be able to pit the women against one another.

Liam To Try And Convince Hope Against Thomas

In the upcoming episodes of the Bold and the Beautiful, it looks like Liam will try and convince Hope against Thomas. He will accuse Thomas of various things and try to persuade Hope to cut all ties with the man all at once. After he is done with Thomas, Hope will bicker back at him. Liam tells Hope that Thomas had fooled her. That’s when Hope loses it all. She reminds Liam about him kissing Steffy and says that whatever happens, Thomas will never cheat on her.

The Bold and the Beautiful Spoilers: Zoe To Keep A Condition For Thomas

The Bold and the Beautiful spoilers for the upcoming two weeks suggest that Zoe will keep a condition for Thomas. Thomas will propose to Zoe in the forthcoming episodes of soap opera. He will do that in front of the whole family where Hope is present too. This looks like a move the man played to give Hope a loud and clear message. He also has Douglas to witness the proposal.

It’s all hearts and flowers there, but Zoe is also listening to everything people are saying about her boyfriend. Nevertheless, she wants everything the guy is offering. So, keeping everything in mind, Zoe tells Thomas that he will have to meet a condition before she agrees to marry him. What is this condition? Will Thomas be able to fulfill it? We will have to watch the soap to know.

It looks like this proposal will affect both Hope and Douglas in the wrong way. The two will even start panicking. Watching his dad proposing Zoe for marriage was very difficult for the kid. Hope Logan did not take the news very nicely, either. It looks like the lady forgot that her mom and Liam had warned her about how she was getting played. She has now fallen in the trap Thomas had laid.

Other Bold and the Beautiful spoilers reveal that owing to this proposal, Douglas will run to his mommy. He thinks that because of all this, he might lose his mother that, of course, he doesn’t want. Hope will assure the kid, and in return, he will tell her a secret. Keeping everything in mind, Hope will weigh her decisions and decide what she wants to do next. What will she do? Will she surrender and go back to Thomas, or she has something else in mind?

The Bold and the Beautiful Spoilers: Wyatt To Comfort Sally

Other Bold and the Beautiful Spoilers hint that Wyatt will feel very guilty in the days to come. He knows that Sally’s death sentence isn’t his fault, but he is still feeling awful about it. On the other hand, Flo Fulton is feeling the same. So, it looks like Flo will be there for Wyatt in this tough time. However, Wyatt is on the go-to comfort, Sally. So, we may get to see a wedding for Sally. Also, Brooke will set various conditions for Ridge Forrester and tell him what he will have to do to rescue his son from her.

The Upcoming two weeks look very promising in The Bold and the Beautiful. There are a lot many emotions that could take over. What is Zoe’s condition? How will Hope react to it all? Will Thomas succeed in his plan? What will Wyatt do to comfort Sally? We will have to watch the soap opera to know more. Stay tuned with TV Season Spoilers to get The Bold and the Beautiful