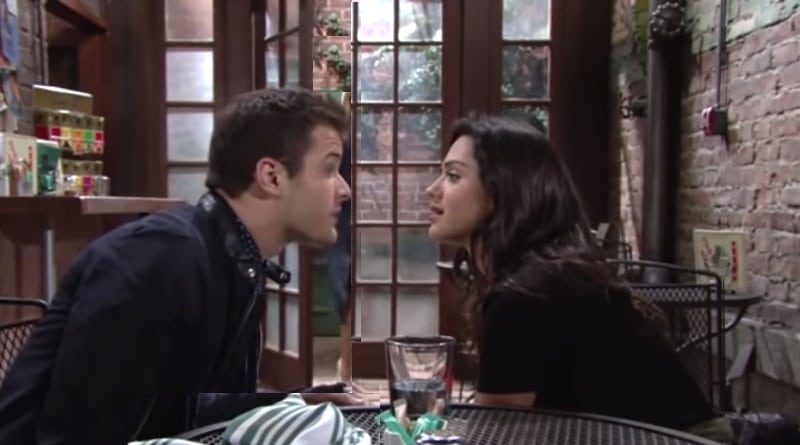 The Young And The Restless Spoilers For Next Two Weeks: Shock For Kola, Surprise For Sharon

According to the Young and the Restless Spoilers for the next two weeks of January 2020, Kyle and Lola will face a confrontation. Mariah Copeland will hear a surprise from Tessa. Also, Sharon will receive a surprise gift from Nick. Phyllis is planning something big, and Victoria has evidence against Billy. In spite, David Hamilton has a difficult job to do. Genoa City has a lot of excitement ahead.

The Young And The Restless Spoilers: Kola’s Conflict!

In the coming days, Kyle and Lola will encounter an argument over Theo. Kyle is not happy with Lola’s extra attention to Theo. He will accuse her of failing to discourage Theo, but Lola will deny his allegations stating them absurd. Also, Kyle will punch Theo and Lola won’t appreciate it. Theo won’t give reigns to his actions there. While Kyle and Summer will be on a business trip, Theo won’t miss that opportunity to hijack Lola. However, Theo and Summer’s trip won’t be innocent enough. Both will end up with a steamy kiss.

Mariah Copeland is distressed for a while. It seems she will receive a pleasant surprise from Tessa Porter. However, Mariah won’t disclose Sharon’s cancer news to her. Also, Sharon is trying to keep it private. Maybe it is an effort to keep away Mariah from worry. Moreover, fans will witness more Tessa and Tanner scenes, but Tessa is not ready to completely trust Watts.

The Young And The Restless Spoilers: Nick Surprises Sharon!

Spoilers tease that Nick Newman is supporting Sharon to deal with cancer. Meanwhile, he will oblige her by gifting a necklace which indicates three charms- hope, faith, and love. Sharon will be overwhelmed with such a nice present. It will break her into tears. Nick will also advise someone to be in line. Spoilers tease that it is Phyllis Summer who wants to trouble Sharon.

Phyllis, on the other hand, is disturbing Abby and Chance’s relationship. She is flirting with Chance while offering him a date. Chance seems to play cunning by failing the plans of Phyllis. She is resisting to spend a night together, but the couple will somehow manage, and the sparky moments will be seen. The Red never rests!

Billy Abbott and Victoria’s relationship is becoming weak, while Billy is busy hooking up with Amanda. Spoilers tease that observing Billy crossing his lines. The lawyer will set limits for him. Amanda will once again remind him of their friendship. Also, Victor Newman will provide some evidence to Victoria. He wants his daughter to confront Billy. Now, Billy has to decide whether he wants to save his relationship with Victoria or is he done?

On the contrary, David Hamilton will make a difficult decision. For that, he will need Elena’s support. Instead of Amanda, is he planning to hunt Cane Ashby and Colin Atkinson? Stay tuned with TV Season Spoilers to get Y&R The Young and the Restless Spoilers and updates for upcoming episodes.