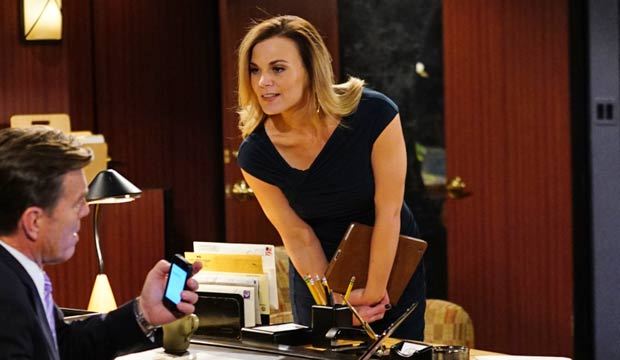 Adam has been one of the biggest schemers of all time on The Young And The Restless. Fans are aware of his tricks and what he is capable of. As we all know, Gina Tognoni’s departure is coming near. She is about to leave the show soon. However, there are many episodes with an interesting plot involving her yet to air. According to The Young And The Restless spoilers, Gina has teased that Phyllis and Adam share a shocking connection. It’s going to be a major shocker for the fans.

The Young And The Restless Spoilers: Phyllis In Vengeful Mode

Gina recently posted a picture of her and Grossman. She mentioned in the caption that the two of them have enjoyed a lot of filming together. They are going to have a lot to say in the upcoming weeks. This is a direct indication that Phyllis and Adam are involved in some way or the other. This opens doors to different speculations about both the characters. Let’s take a look at the options we have here.

Jack’s doppelganger raped her, and Jack was the one to bring him in town. Phyllis can never forget the grim reality, and this is the main reason behind her anger. She definitely wants the Abbots to pay. She is suffering while all the hypocrites are getting away with their deeds. Phyllis is also pissed at Nick who dumped her.

@mgrossman18 Adam and Phyllis will have a lot to say in the next few weeks …We enjoyed our scenes together❤️for sure .

Adam is basically the black sheep of the Newman family. If Phyllis is in the state of vengeance, there is no one better to form a partnership with than him. This might mark the end of Tognoni’s journey on The Young And The Restless. It could be possible that Michelle Stafford could arrive when Phyllis’s downfall is about to come. One thing is for sure, Gina and Grossman are going to share the screen together and it’s going to be epic.

It’s a fact – there’s nothing like #YR. ❤️ Don’t miss all of the drama and romance this week! pic.twitter.com/ic2E9JIbMC

One one hand, Victor is trying to keep his family peaceful whereas Nick is preparing for a battle. Lauren is setting Jack up with the love of his life. She has somehow convinced him that he will die alone if he doesn’t let her help. Thus, she is trying her hand at matchmaking. For this to succeed, Jack and the woman she sets him up with should think that this is a good idea. However, after the entire chaos with Kerry, it is surprising that Jack hasn’t put himself off to love altogether.

However, he has always been romantic. It is likely that Lauren easily convinces him to find love again. But in the end, he might surprise Lauren with his choice. Adam is recovering from a serious situation. Victor wants Nick, Abby, Nikki, and Victoria to help in this time of need. Now that Adam’s memories are back, he knows all about his gunshot and the surgery prior to it.