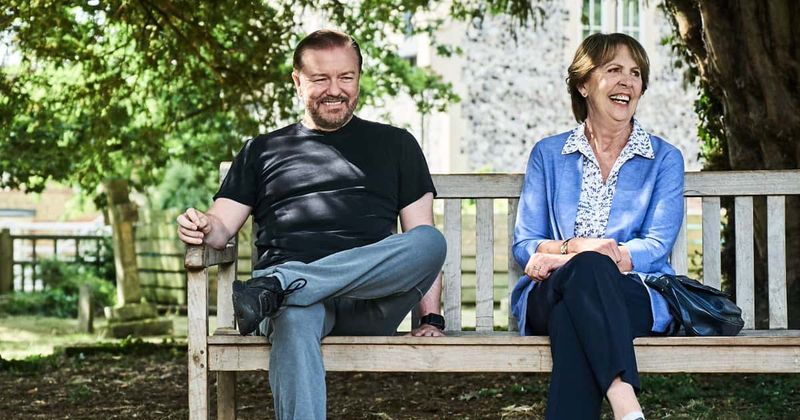 After Life Season 2: The black comedy-drama, After Life, is renewed for its second season. Netflix announced the news on its official twitter handle. Moreover, the upcoming season has wrapped up the filming schedule and is now in the post-production process. The show has gained massive popularity amongst the fans. The sitcom was praised due to its touching and humorous storyline.
After Life revolves around Tony, whose life turns upside down when his wife, Lisa, dies from breast cancer. He is depressed and suicidal and decides to punish the world for his wife’s death. Tony becomes very rude and destructive. Ultimately, his destructive nature gets receded when he gets surrounded by individuals who try to make him a better person. The first season of the show received heart-warming reactions from fans. After Life Season 1 premiered on March 8, 2019. It had a run of 6 episodes.

Afterlife Season 2 has finished filming. The showrunner and the lead star, Ricky Gervais has shared a teaser picture from the set of After Life Season 2 on his official twitter handle. He confirmed that the show has wrapped up its filming schedule. He wrote in the caption- the filming is done.

After Life Season 2: Who All Will Return?

The showrunner and the lead star Ricky (“Tony Johnson”) will return for the second season of After Life. Most of the original cast members including Ashley Jensen (“Emma”), Roisin Conaty (“Daphne”), and Diane Morgan (“Kath”) will return in After Life Season 2. Moreover, Tony Way (“Lenny”), Mandeep Dhillon (“Sandy”), David Bradley (“Ray Johnson”), Tom Basden (“Matt”), and Penelope Wil ton (“Anne”) are likely to return.
Although, spoilers tease that Tim Plester (“Julian”) will not return in the second season of the show. However, there are no official updates regarding the cast additions of Season 2.

After Life became a global success since it released in March. In a recent interview, the showrunner, Ricky Gervais said that he is planning to release After Life Season 2 in spring 2020. When asked about the release date of the upcoming season, the showrunner said, there is still time to reveal the official release date of the show.
Since Netflix has not given any confirmation regarding the release date, fans are delighted that the show is now in the post-production process.

The last episode of Season 1 gave a little clue about how the storyline of the second season will unfold itself. Spoilers tease that Tony will still be evil and he is just faking it to be good. However, there is no official confirmation about the same. For more updates on After Life Season 2, stay tuned with us.