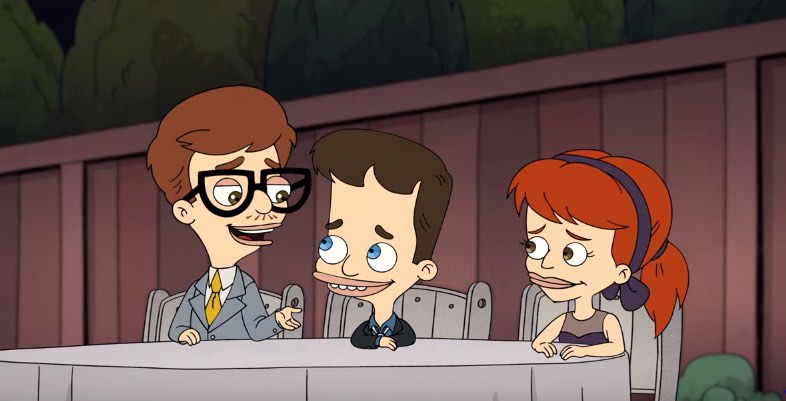 Yes! Our favorite animated sitcom will run for three more years after Big Mouth Season 3. As of now, including the third installment, fans will get to watch four brand-new seasons. Unbelievable, right? Since its debut back in 2017, the series has brought in much milk and honey. Hence, the streamer gained the confidence to order a few chapters altogether. Season 3 will soon hit the screens and here’s everything you need to know before the premiere.
Show creator Andrew Goldberg wanted to create a show about going through puberty. Hence, he, and screenwriter-directors Jennifer Flackett and Mark Levin approached co-creator Nick Kroll. Ultimately, they all came up with the idea, and Big Mouth came into existence. The adult animated sitcom did very well with the audience. Its relatability helped the characters to grow a connection with the audience. Netflix had a big hand in reaching the number of people the series originally did.


The story of the show revolves around a group of 7th graders as they navigate their way through puberty. The series introduces a bizarre yet entertaining concept of personifying hormones as hormone monsters. One such hormone monster is Maurice, who pesters lead character Andrew and sometimes Nick and Jay as well. The other one is a monstress called Connie, who bothers Jessi and occasionally Missy. Moreover, the kids go through a lot throughout the phase of their puberty, and fans love the combat.

The second season premiered back in October 2018. The highly positive response led to the renewal of Big Mouth Season 3 by November that year. Being an animated series, Big Mouth takes less time to go through the production process. Yet, showrunners take a year to release an installment. It sure is annoying; though, fans agree that the content is worth the wait.

Fortunately, yes. The fan-favorite adult comedy is greenlit through the sixth season. With three new installments coming up, Netflix has a lot of chances to amaze us yet again. Well, including Big Mouth Season 3, the animated teen series will have four brand-new chapters coming up. The news was announced by show creator Nick Kroll on Big Mouth’s official social media accounts.

Queer Eye Cameo At Its Best!

Amongst all other reality shows on Netflix, Queer Eye sure stands as the most unique of them all. It is popular all around the world, and all of us often wish to get a makeover as well. Guess what? The Fab 5 are now coming to another fan-favorite series. They are called in to do a cameo, and it looks so fascinating. Are you excited about the crossover? Also, what do you think about the challenging makeover coming up in Big Mouth Season 3? Tell us in the comments below.

Netflix has released the official Big Mouth Season 3 trailer. The two-minute video gives us a hundred reason to binge the entire season altogether. Everything including Jessi on ‘Do The Thing’ show, the flowing hormones and the Queer Wye looks fascinating as hell. The streamer released the trailer a few days ago on September 17, 2019.

Netflix promises us more changes, surely more feelings and a lot more touching than ever. Also, we know that it’s going to be much grosser. Well, we sure like it, don’t we? Big Mouth Season 3 releases on October 4, 2019. So, get ready with some popcorn and tissues because it’s going to be a wild ride!