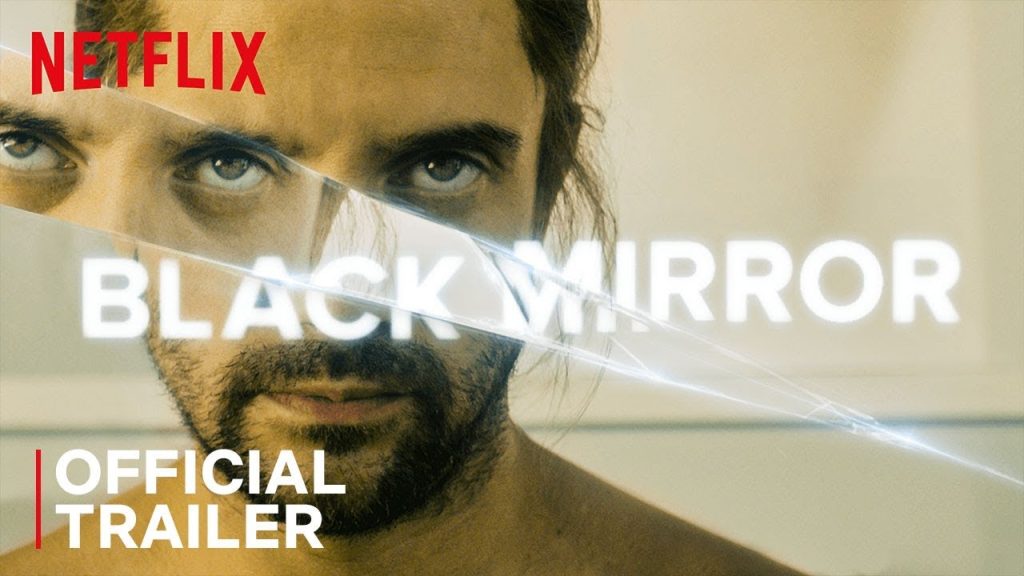 Black Mirror Season 5: Trailer Breakdown! What Are The 3 Stories About?

Netflix literally blew our minds with the mega trailer of ‘Black Mirror Season 5.’ With another depiction of how technology will/may affect the generation, showrunner Charlie Brooker works his magic again. Originally developed and premiered on Channel 4, the dark fiction show was picked up by Netflix after its second season. Gladly, Black Mirror got its rightful audience, as a large number of fans are appreciating Brooker’s take on increasing tech-use.
The first official trailer of Season 5 recently premiered and hints several crazy facts about the new installment. As per the trailer, the fifth season is likely to have three episodes. The three different stories will target various topics solely focusing on technology as the enemy. Moreover, Netflix now has one of the most interesting sets of cast members this time. Miley Cyrus, Andrew Scott, Yahya Abdul-Mateen II, Topher Grace, Nicole Beharie, Angourie Rice and Anthony Mackie are going to have major roles. Hence, here’s everything that can happen in the upcoming installment.
https://youtu.be/2bVik34nWws

The trailer begins with Andrew Scott looking frightened of the smartphones buzzing all around him. He then begins to freak out and as he couldn’t take the phones near him anymore. Moreover, he then has a psychopathic breakdown and soon pulls out a gun. We don’t know the reason why, but the police start following him.


When asked to surrender, Scott shoots in the air while young kids who were recording him, get startled. Later in the video, Andrew abducts a man in a car yelling that everybody today is hooked up with technology. This entire story targets stating technology as the super-villain of the future. Set in Britain, this particular episode will be a great shot in enlightening the side-effects of the increasing use of mobiles.

From the trailer, the second story begins on a sunny American day. Yahya Abdul-Mateen II and Anthony Mackie are scrolling through the pictures of a girl on a dating app. The two try to hide it when Mackie’s wife (or girlfriend) enters the room. The couple is then seen having problems in the relationship. Soon after, we see him opting for some kind of dating gad get that enables him to get intimate with another girl. Mackie’s infidelity here, results in something far more dark that the couple could’ve ever imagined.

Miley Cyrus was already in speculations about joining the cast of Black Mirror Season 5. Luckily, the news turns out to be true and here she is, playing a very complex character in one of the episodes. As far as the trailer hints, she is about to play a pop star with 20 thousand fans out there. As she gets on stage, we see her in a white outfit with a recognizable pink wig.


On the other hand, there’s this new character, who seemingly has no friends and totally depends upon her AI gadget. The gadget is in the form of a doll, also wearing a white outfit with recognizable pink hair. In one of the scenes, a woman even says that the gadget isn’t just a doll, but poison. But the girl seems to be very affected by it.

This story probably targets the harmful over-use of the AI-technology in future. Moreover, Miley Cyrus will likely be the one introducing the doll to the world. This gadget will have some serious effects on the human mind and Brooker will elaborate on the idea.

Fans had been eagerly waiting for the release of Back Mirror’s new installment. And finally, we now have a date to mark on our calendars. Season 5 of the sci-fi series is ready to release on June 5, 2019.
Black Mirror is a popular and mindful development. Showrunner Charlie Brooker has been widely appreciated about his vision of the future world and the efforts he puts in to bring his thoughts to screen. It’s hard to guess what exactly may happen in the new episodes. However, we’re sure that Brooker will never fail to impress his fans.