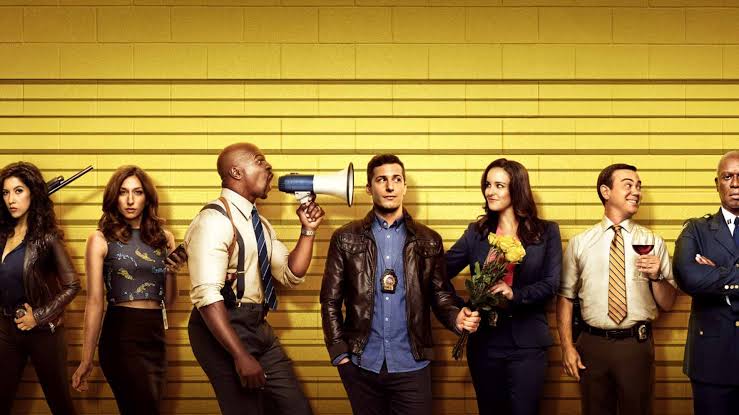 No Doubt, No Doubt! Noine Noine had to return. Brooklyn Nine-Nine is one of the most desired cop-com amongst the fans. With the return of Brooklyn Nine-Nine Season 7, not on Fox, but NBC, fans are going all crazzzzzy!
After giving six fabulous seasons, Fox decided to cut it down because of a slight decrease in its ratings. However, the fans went against the decision and did loads of protest both online and offline to save the show. They even pleaded to get back the show standing. And finally, NBC came up as an angel and renewed the show for its seventh season, earlier this year.

NBC yesterday only released its midseason schedule. The schedule also included the highly anticipated seventh season of Brooklyn Nine-Nine. Season 7 will premiere on February 6, 2020. Moreover, the network confirmed that the series would have 13 episodes. The premiere episode will be an hour-long. And, the premiere will take up the 8-9 pm slot, before returning the following Thursday at 8.30 pm.

Brooklyn Nine-Nine Season 7: Who Will Return?


The main cast, which is continuing from years, will return for the seventh season of Brooklyn Nine-Nine as well. Cool Cool Cool! The list includes Andy Samberg as Jake Peralta, Melissa Fumero as Amy Santiago, Terry Crews as Sergeant Terry Jeffords, Andre Braugher as Raymond Holt, Stephanie Beatriz as Rosa Diaz, Joe Lo Truglio as Charles Boyle, Chelsea Peretti as Gina Linetti, Dirk Blocker as Michael Hitchcock, and Joel McKinnon Miller as Norm Scull. However, there is one character that won’t be making it back. Stewart, the corgi, who played Cheddar, recently passed aged 13.

The sixth season of the series was kind of a roller-coaster ride for everybody at the 99th precinct. Unfortunately, Captain Holt did not receive the role of commissioner, as he lost out to John Kelly. However, he got over it after ruining Jake and Amy’s honeymoon – and their Die Hard themed sexcapades. Holt decided to confront and point out Kelly’s old-fashioned ways of working. For that, he teamed up with his all-time nemesis Madeline Wuntch.
Meanwhile, the sixth season also saw Captain Holt clearing his Lieutenant’s exam. Also, Gina Linetti finally chose to work on her inherent skills. She decided to leave the precinct to become a successful internet celebrity.

In some talks with Digital Spy at San-Diego Comic-Con, show producer Dan Goor teased the possibilities of the seventh season. He made clear that the show will pick up where it left off with Captain Holt. According to him, “We’re gonna try to pay off the cliffhanger that we had. I think we’re gonna bring back a lot of our favorites, which I think are also fan favorites.”
As Jake and Amy are married now, the Brooklyn Nine-Nine Season 7

will feature the couple’s dynamics after marriage. How things work at the house as well as the police station? The next season will also feature a Pimento episode, a Pontiac Bandit episode (obviously), and most probably a Marc Evan Jackson one.