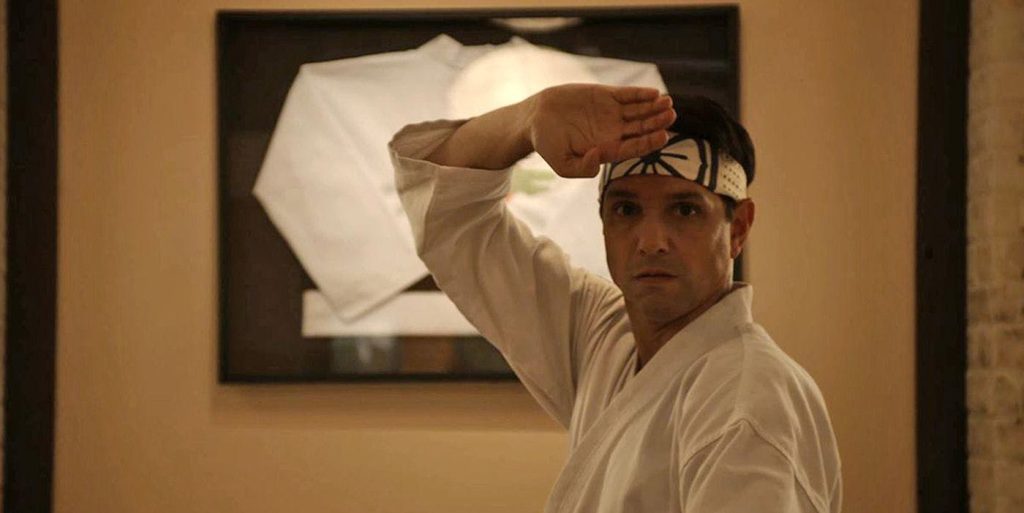 After loads of appreciation, YouTube Premium has finally announced ‘Cobra Kai Season 2.’ After 35 long years, The Karate Kid film series was reborn as The Cobra Kai. It was unbelievable for the fans that any Karate-centred series can compete with the iconic franchise.
The follow-up series is the continuation of the original movie. Cobra Kai starts the same story after a 30-year leap. Moreover, the comedy-drama brought the legends, Ralph Macchio and William Zabka back on-screen after 34 long years. In Fact, in the new season, the actors will reprise their roles as Daniel and Ralph.
Reportedly the Cobra Kai Season 2 will also have ten-episodes. The news was a real blast for the fans. The YouTube Original portray the story of two rivals from 1994’s The Karate Kid and its three sequels. The show makers have high expectations from the sequel as the former series was successful, and the first episode got 5.4 million on the day of release.
Cobra Kai Season 2 Spoilers & Plot Details
The action-packed first season was a super hit with a strong plot. The first season escalates as Daniel bids Johnny’s son Robby (Tanner Buchanan) for a fight against the Cobra Kai. On the other hand, Johnny coaches Miguel (Xolo Maridueña) to fight against his own son.
By the end of the season, Miguel wins the All-Valley Karate Tournament by defeating Robby. Johnny gets his 30-year old revenge, which he couldn’t enjoy for longer. Johnny’s old violent sensei, John Kreese (Martin Kove) returns as an unpleasant surprise for him. Hence, there are chances that the new season may unravel their equation.
Moreover, Daniel starts teaching Miyagi-style karate to rechallenge the Cobra Kai. Thus, he may return with a well-trained Miyagi team in Cobra Kai Season 2.

The second season of Cobra Kai was announced back in May 2018. After months of the production work, the shoot wrapped in November 2018. The lead actor Ralph Macchio shared the news on his Twitter account.

in the year-end issue on Top TV shows of 2018. Thank you, friends! More comin’ soon! pic.twitter.com/w250hqT8nZ

YouTube Premium declared the renewal of the famous show with a short teaser. It was launched on May 10, 2018.

Meanwhile, Cobra Kai official YouTube account launches another official teaser as the ‘Sneak Preview’ to the second season. The teaser was released on October 31, 2018.

The regular cast from the first season will return to Cobra Kai Season 2. Veteran actors Macchio and Zabka are sure to be present in the upcoming season. Important cast such as Tanner and Xolo will reprise their roles as Robby and Miguel.
Along with them, Courtney Henggeler as Amanda LaRusso and Mary Mouser as Samantha LaRusso will also be back.
Moreover, Martin Kove as Kreese will be the new addition to the cast. His introduction at the end hinted his presence in the next season. Makers have suggested Kove will be a regular character in the upcoming season.

The co-creator of the show, Jon Hurwitz made an exclusive revelation about the premiere. He teases that the return of the appreciated show is near. Although he managed to tease fans by not announcing a premiere date,, but suggested the new season will release in late April or early May.

Look for it in late April or early May. Official release date should be announced fairly soon. #CobraKai #Season2 https://t.co/IUvAiyZqV3

Fans are longing for the action-filled second season. Fortunately, the premiere is just a few months away. Excitement for the upcoming season is continuously increasing as the 35th anniversary of 1984’s The Karate Kid is approaching. Hopefully, Cobra Kai Season 2 will be another cinematic milestone for The Karate Kid franchise.