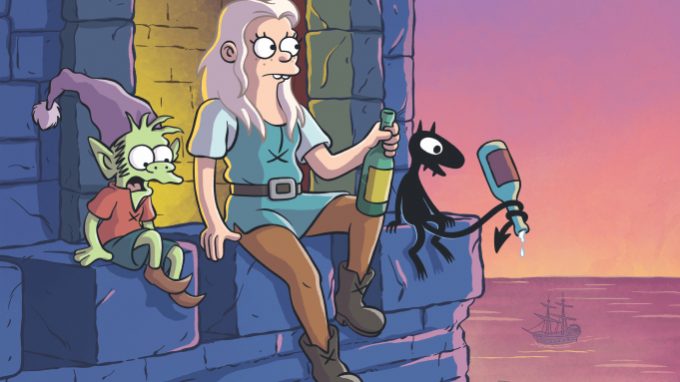 'Disenchantment Season 3': Renewed Or Canceled? When Will It Release?

Disenchantment Season 3: Princess Bean, Elfo and Luci will all be back at our Netflix screens again. The second season recently released and fans are now craving another set of episodes to binge. Will there be Disenchantment Season 3? Has Netflix renewed it yet? Well, the news is positive. Here’s everything you need to know.
Disenchantment debuted last year in August 2018. The animated fantasy series suited the audience well and received an impressive rating from critics. Netflix initially released ten-episodes of the first season. Whereas, another set of ten-episodes premiered recently on September 20, 2019. The streamer is now gearing up for a third season/part.

Will There Be A Disenchantment Season 3?

Fortunately, yes. Netflix has already greenlit a third part of the animated sitcom. The renewal was announced back in October 2018, soon after the release of the second part. Fans were delighted to hear the news. Whereas, millions of viewers hope that the show gets a lot more installments in the future.

There Will Be A Fourth Part As Well!

Yes, Netflix’s popular anime will not only have a third part but a fourth one as well. The showrunners currently have a 40-episode plan. As of now, fans will have 20 upcoming episodes. However, the streamer won’t hesitate to renew another installment, in case the third and fourth parts do well with the audiences.

The second season of Disenchantment may not be the best work of series creator Matt Groening, but it surely deserves a watch. As compared to the debut installment, Part-2 received mixed reviews from critics. It brings us to new fascinating locations to explore. Moreover, it transforms the storytelling into a much mature version. Whereas, it also converts into a much more character-driven drama this time.
https://youtu.be/Q00bB9o7Eok
As far as the comic timing is concerned, the 30-minute episodes of the second season stretch the effects of sarcasm. It also affects the audience’s comical connection with the story. Although Season 2 sure has a much more interesting storyline than the debut installment. Moreover, it sure deserves a watch this time.

Disenchantment Season 3: What Will Happen Next?

Similar to the first season, Part-2 saw a major cliffhanger in the finale as well. Disenchantment Season 3 will probably pick up the story trying to resolve the open-ended conclusion. Show creator Matt Groening promises that the third installment will have more cranked-up suspense. On the other hand, fans must all be ready for infuriating plot twists ahead. Some of our beloved characters may get knocked off this time around.


Popular for shows like The Simpsons and Futurama, Groening has a bunch of surprises for us. Similar to the second installment, Disenchantment Season 3 may have several other Easter Eggs this time. What was your favorite Easter egg from Season 2? Tell us in the comments below.

When Will Disenchantment Season 3 Hit The Screens?

In order to decrease the waiting time for fans, showrunners have split the installment into two parts. Each part now has ten episodes each. Moreover, the upcoming third and fourth parts will also be ten-episodes long. Disenchantment Season 3 will hit the screens sometime in 2020. To be specific, we may expect the third installment to appear in the last quarter of next year. Additionally, the fourth one will premiere one year later in 2021.