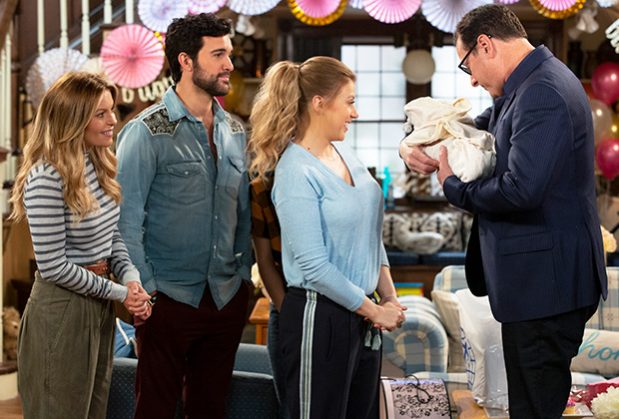 Recently, Netflix has dropped the official trailer of Fuller House Season 5. Since the show got renewed for its fifth season in January 2018, fans were asking for the fifth season. Moreover, Fuller House Season 5 will be the final season of the series. Created by Jeff Franklin, the American sitcom has received massive acclaim from the fans.
Fuller House is a spin-off of the Full House TV series, which aired from 1987 to 1995. The show revolves around D.J. Tanner, a widowed mother of three sons. She lives with her sister Stephanie and best friend, Kimmy. The show has earned a loyal fan base over the years.

Fuller House Season 5: What Does The Trailer Suggest?

Recently, the official trailer of the fifth and final season of Fuller House released. Lori Loughlin, aka Aunt Beck, does not appear in the show’s final trailer. Moreover, the trailer shows the arrival of Jimmy and Stephanie’s surrogate baby with a lot of giggles. Along with D.J., the entire family is congratulating the couple for their newborn baby.
As the trailer moves ahead, fans will see that Danny Tanner is giving some fatherly advice to his daughter, Stephanie. He further tells her about the duties that a parent has to perform for their children.

John Stamos Is Joining The Cast

John Stamos will make a guest appearance in the fifth season of Fuller House. He announced the news by posting a short video on his Instagram story. Moreover, in the Instagram story, he showed off the script of Season 5 with a “Jesse Katsopolis” name tag in it.
The original cast members including D.J. Tanner-Fuller (“Candace Cameron Bure”), Stephanie Tanner (“Jodie Sweetin”), and Kimmy Gibbler (“Andrea Barber”) will return to the upcoming season of the show. Moreover, Ramona Gibbler (“Soni Nicole Bringas”), Jackson Fuller (“Michael Campion”), and Fernando (“Juan Pablo Di Pace”) will likely return. Along with them, Max Fuller (“Elias Harger”), Dr. Matt Harmon (“John Brotherton”), and Jimmy Gibbler (“Adam Hagenbuch”) will also return.
Lauri Laughlin (“Aunt Beck”) will not return to Fuller House Season 2.

Spoilers tease that Season 5 will revolve around Stephanie being a new mother. Furthermore, anticipations suggest that D.J. and Steve will tie a knot in the fifth season. Since Jimmy and Stephanie are engaged and Fernando and Kimmy are happy with each other, fans may likely see a triple wedding in the upcoming season.
In an interview, Candace Cameron Bure said that the forthcoming season of the show will offer a lot of emotional content to the fans. She further added that since Fuller House Season 5 is the final season of the show, the whole cast wants to bid an emotional farewell to fans.

The streaming service has announced the official release date of the show. The first half of Fuller House Season 5 will hit the TV screens on December 6, 2019. The second half of Season 5 will drop in mid-2020. However, Netflix has not given any confirmation regarding the release date of the second half of the show. For more updates on Fuller House Season 5, stay tuned to T.V. Seasons and Spoilers.