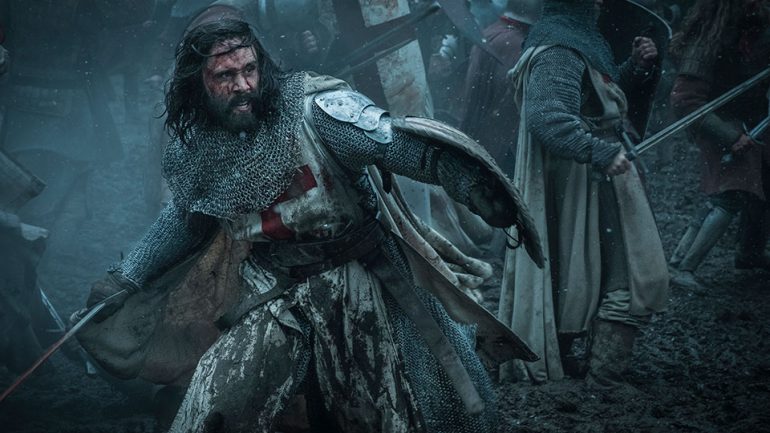 Every Man has two sides, the one he wants to be, and the one he really is. With more words of wisdom, Knightfall will return for Season 2. History has renewed Knightfall Season 2. Although the series got mix reviews from critics, the show performed well. Moreover, History doesn’t want to let go of its period drama. Aaron Helbing will be the new showrunner of the series.
The last episode of Knightfall aired on 7th February 2018. The network made fans wait a bit to renew the series. The second season of the show has got a new teaser, and it looks interesting with a new character inclusion. So what will happen in Season 2? Who is the new character? When Will the show premiere? The cast of the show. Here’s all you need to know about Season 2 of Knightfall.

What is the Storyline of Knightfall Season 2?

The Season 1 of Knightfall saw Landry and Joan’s baby, saved by the Grail. Well! was it the real Grail? Doubts are there. Later, we saw Templar Master Berenger (Peter O’Meara) examine the now-smashed relic. He then uncovers a vial that bore a scroll with names on it. Then he swallowed it. The whole scenario raises suspicions.
Whether the baby was safe? Was it the real Grail or something equivalent to that? What are the consequences of this whole situations? A lot of answers will be provided by Season 2.
Ed S toppard who characterizes King Philip IV of France expressed his views on this aspect. He said that this is the History Channel, not SYFY. So that gives a certain level of uncertainty and ambiguity as to whether it is like the holy power of the Grail, or is it just this instant or did it save the baby? Did it not protect the baby? If not, then what protected the baby? It draws into trying to create a world that is very real that is also very dramatic, grand and exciting.

The new teaser for season 2 has arrived. The center of attraction was Mark Hamill’s debut in the series. Hamill will pursue the character of Talus The Initiate Master.
The upcoming season will feature the bond between Talus and Landry. Takus has a moral conflict about the strong-minded and courageous Landry. The sword is the emblem that unites and divides the brotherhood in Season 2.
Season 2 of Knightfall will also feature Tom Forbes and Genevieve Gaunt as Prince Louis and Isabella, respectively. The son and daughter of King Philip.
All the lead cast will return for Season 2. Therefore, we will see more of Tom Cullen as Templar leader Landry du Lauzon, Julian Ovenden as William de Nogaret, Padraic Delaney as Gawain and Ed Stoppard as King Philip IV of France. Although, Olivia Ross who portrays Queen Joan of France and Navarre, will be missed this season. King Philip killed her.

Premiere Date For The Knightfall Season 2

History has yet not revealed any premiere dates for Knightfall Season 2. The teaser also stated Coming Soon for the series. However, speculations of season 2 airing in the late quarters have surfaced.