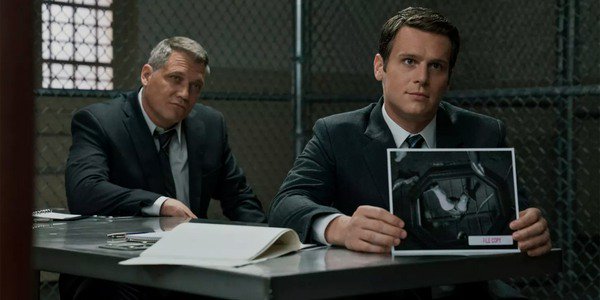 Netflix is taking too long to renew the high-potential crime drama. The second season took quite a while to be back at our screens. Hence, we’re not so hopeful about Mindhunter Season 3 returning anytime soon. Although we sure know that the installment is going to be full of twists and turns, and a thrilling bunch of Serial killers. As of now, here’s everything you need to know about the upcoming season.
Mindhunter debuted on the streamer back in October 2017. In no time, it became one of the finest psychological thrillers existing today. The series received heavy appreciation alongside top ratings. The story of the show follows two FBI agents in the early days of its Behavioural sciences unit. Agents Holden Ford and Bill Tench attempt to study serial killers in order to create their criminal profiles. The criminal profiling would then help the bureau to catch other potential murderers with multiple victims.

Netflix is yet to renew the thrilling investigative series. The first two installments of the show were ordered altogether back in 2016. Hence, fans didn’t need to worry about the second season. However, looking at the streamer’s history of axing potential shows such as Santa Clarita Diet, The OA, and several others, we’re all worried about Mindhunter Season 3. Although the crime drama stands as one of the most successful projects on the giant. Moreover, the cancelation will certainly offend millions of loyal Netflix subscribers around the globe.


Luckily, lead actor Holt McCallany reveals in an interview with Pop Culture that showrunners initially planned to create five-seasons. The actor plays the role of Bill Tench on the show and holds an essential place in the cast list. If his statement turns out to be accurate, the series may have two more installments besides Mindhunter Season 3. A total of five seasons will help the showrunners to cover the entire investigative history of the FBI Agents.

It is almost certain that the upcoming installments of the masterpiece will feature a bunch of new serial killers that were active around the 1980s. Hence, we’ve studied the history of the real-life FBI agents behind the characters Holden Ford and Bill Tench. As per the study, the pair, John E. Douglas and Robert K. Ressler, have interviewed a couple of murderers in between the years. Thus, here are a few of them that may feature in Mindhunter Season 3.

John Wayne Gacy was an infamous serial killer active from 1972 to 1978 in Cook County, Illinois. He is responsible for raping, torturing, and killing at least 33 teenage boys and young men. Gacy was imprisoned since 1980 for 14 years to eventually get executed by lethal injection back in 1994.


As per reports, Douglas and Ressler both interviewed the murderer in the 1980s. In fact, Ressler made the killer reveal that “two or three” of Gacy’s PDM employees may have helped in the murder. The FBI agent plays a major role in forming his criminal profile. Hence, there are chances that Mindhunter Season 3 may feature Gacy as one of the main highlights this time (similar to Charles Manson in Season 2).

The infamous serial killer kidnapped, raped, and murdered numerous young women and girls around the 1970s and possibly earlier. Ted Bundy has been one of the most notorious murderers that people know of. He confessed for committing around 30 homicides while he may have commited much more than the number. After a series of controversies, Bundy was finally executed back in 1989.


According to reports, both the FBI agents have interviewed and studied the American serial killer. Douglas and Ressler’s research ran around the 1980s, which suits the expected setting of Mindhunter Season 3. Hence, the chances are high that the latest season may revolve around the infamous murderer.

The BTK Strangler or BTK gave himself the name referring his style of murdering – “Bind, Torture & Kill.” The real name of the infamous killer active between 1974 and 1991 was Dennis Rader. Responsible for around ten killings, Rader sent taunting letters to police and newspapers describing the details of his crimes.


Both the previous seasons of the crime drama feature short clips of the killer planning his crime. The second season made it almost clear that the murderer will have a major role to play in one of the upcoming installment. However, he was originally caught in 2005, which is much later than the current setting of the show. The third season may not feature his interview of arrest, but it sure will keep on highlighting his presence.

Netflix is yet to announce any significant detail of the upcoming installment. In fact, as of now, we don’t even have a renewal. However, since the second season took almost two years to return, the third one may take around the same time as well. We can expect the season as early as late 2020 or early 2021.