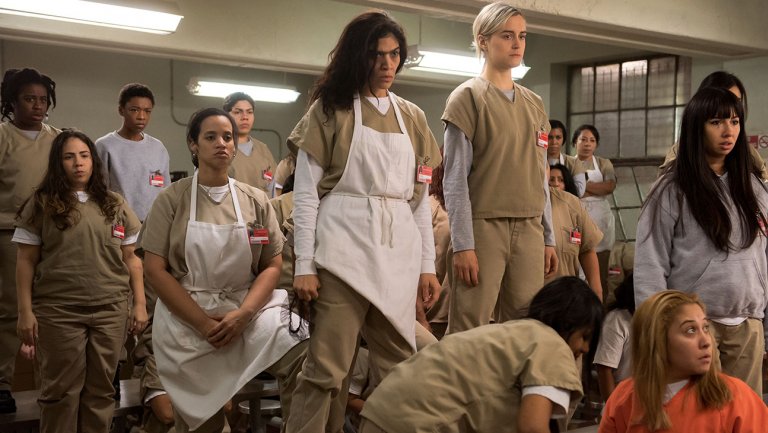 “Orange Is The New Black Season 7” will shut the prison doors for all the binge-watchers. The next installment of the women-centric show is sure to be the farewell season. Netflix renewed the show till its seventh season in 2016. Initially released in 2013, the crime-drama is one of the most anticipated shows on Netflix.
The show is based on the Piper Kerman’s autobiography. It features Piper’s experience in a women’s jail in New York City. Jenji Kohan successfully pours Kerman’s story into a critically acclaimed Television adaptation.
https://youtu.be/CZ7Zo6ssSx8
The complex season finale of the sixth season left the fans doubtful about what may happen in the next season. While some ladies were released from Litchfield Prison, some are stuck behind bars forever. Now, all we need to know is what’s in store for Piper and the pack in OITNB Season 7.

What Will Happen in Orange is The New Black Season 7?


Piper’s life will be full of confusions after being released from the prison. The new season will portray how she copes on the outside without her wife Alex (Laura Prepon). On the other hand, Alex will have to deal with Badison (Amanda Fuller) all alone. The new season may reunite the couple.
Fans will get to know if Morella and her baby will survive or not. Furthermore, we may see Flores struggling in the detention center.
The crime drama tackles various unusual issues. Moreover, it highlights the topics which affect a prisoner’s safety. The sensitivity is well-handled by the fans of the show. It is difficult to predict what exactly will happen in Orange Is The New Black Season 7. However, it is likely that the upcoming installment may discuss the previous lives of the inmates.

Popular actress Danielle Brooks makes massive revelations about the seventh season. She plays the role of Taystee in the drama. The ending of the series finale is said to be extremely emotional in Brooks’ recent tweet. Brooks recently read the script of the last episode which appears to be an emotional sendoff.

Fam, I just read the second to last episode of our final season…
…and…
it f**ked me up. @OITNB pic.twitter.com/lEzce6zJlv

When will Orange Is The New Black Season 7 Release On Netflix?

Netflix renewed the prison drama up to its seventh season long ago in 2016. All the previous six seasons got June and July releases since the show’s debut. The last season is expected to follow the same release pattern as the others. Hence, Orange Is The New Black Season 7 is likely to get a June or July release date.
Admirers praise the makers of Orange Is The New Black for humanizing prisoners. Moreover, in 2016, the show was the most-watched original series on Netflix. With the end of the prison-drama, the streaming platform will conclude an era of good content. The ladies of Litchfield are returning to bid us a farewell in Orange Is The New Black Season 7.