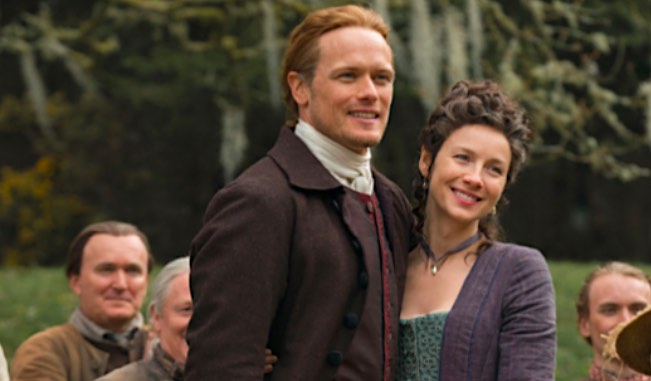 We’re merely a few months away from Outlander Season 5, and it already looks exciting. The series is set to return yet again with a surprise for the fans. Well, someone’s going to get hitched this time. Showrunners recently gave out a picture of a wedding scene from the upcoming installment. Hence, here’s everything you need to know about it.
Outlander opened up to much love from fans when it debuted back in 2014. As of now, the series still is one of the most beloved creations on Starz, and Jamie and Claire are the hottest couples. Starring Sam Hueghan and Catriona Balfe in the leads, the story revolves around the ups and downs the couple goes through. The popular show inspires its premise from Diana Gabaldon’s series of novels and is a brilliant version of the historical time-travel story.

Being a successful show, Outlander deserves to return for another run. Hence, Starz renewed it with full confidence ahead of Season 4 for two installments altogether. Filming for the fifth round soon began around April 2019. As of now, the cast and crew of the show finally wrapped up the shoot. The news came through the pictures that the production team uploaded on social media.

Season 5 Will Be Tough For Jamie!

Outlander Season 5 may not be as easy for Jamie as we all want it to. The actor confessed that his character is actually in a difficult situation this season. He has recently done a deal with the British, though he’s working for two different camps this season. Hence, he is striving to protect his people and the Fraser’s Ridge. Well, he frankly adds that Jamie’s line of thinking is more in the direction of the regulators than the Brits. We hope everything turns out to be fine by the end. What are your expectations from the latest installment? Tell us in the comments below.

The latest installment of the historical drama will be full of surprises. Entertainment Weekly unveils the first look of Outlander Season 5, which reveals that we’re about to attend a wedding soon. While some fans believe that this could be a merry celebration for Jamie and Claire, others believe that it could be their daughter’s wedding. There are chances that Brianna is getting married to Roger Wakefield MacKenzie. However, this grand event will surely bring in much drama to the table.

Jamie Will Build A Two-story House For Claire

Our favorite couple will no more share the small cabin with Claire’s parent in Outlander Season 5. Jamie is about to build his wife a fancy, two-story house this time. The house will also serve as the Fraser’s Ridge headquarters besides a surgery where the leading lady can compose her own medicine. She will soon find ways of being able to perform certain surgeries that would have been commonplace in the 1960s.

Netflix subscribers may still have to wait for Outlander Season 4 to premiere on the streamer. However, they can still watch and re-watch the first three chapters on December 11, 2019, when they finally arrive on the streaming giant. Well, on the other hand, a fifth season is coming soon on Starz on February 16, 2020.