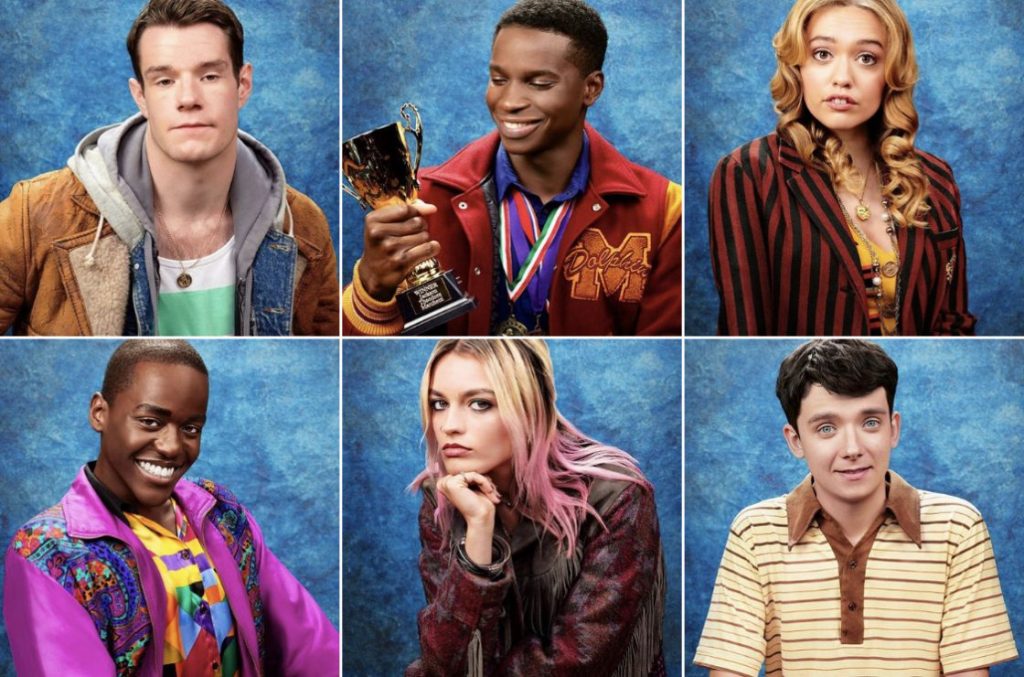 Moordale is ready to welcome a few new kids to Sex Education Season 2, are you? Alongside our favorite set of Netflix characters, we’ll get to meet some fresh faces as well. Well, that’s not it. The latest season is going to be full of unexpected adventures, and we have some secrets to reveal. Here’s everything you need to know.
Netflix’s ambitious show debuted back in January 2019 and landed right into millions of hearts. In no time, the series became a fan-favorite and a unique offer to the teen-drama genre. Starring Asa Butterfield as the lead, the sex comedy revolves around a socially awkward teenager, Otis Milburn. The high school kid is largely bothered by his sex therapist mom’s profession. However, his life turns upside down as a classmate, Maeve pushes him to start sex therapy at school.

After making us wait for months, Netflix finally gave us something to know about the latest installment. Earlier this month, the streamer gifted us with the first looks of our favorite characters. While fans were busy adjusting to their new makeovers, showrunner introduced us to some brand-new Sex Education Season 2 characters as well. The latest pictures were recently uploaded on the show’s official social media handles.

As of now, the popular teen show is adding three members to the cast of Sex Education Season 2. Showrunners revealed the first look at the show’s social media handles. Furthermore, the actors then went on to briefly explain their characters. As the comments suggest, fans have positively reacted to the cast additions and whole-heartedly welcomed the characters.

Talented actress Chinenye Ezeudu is ready to be a part of the widely-adored teen show. Her character, Viv, might hold much importance to the plot of Sex Education Season 2. Netflix describes her to be a super-intelligent, multi-talented academic student. It’ll be interesting to know how the character adjusts to Moordale high.

Actor Sami Outbali is now joining the cast of one of Netflix’s most famous shows. He has previously performed for several french shows and movies before. Fans will now watch him join Moordale Secondary as the new french-student, Rahim. The br and-new character may add some drama to the cast of the second season.

George Robinson’s character will be one of the most interesting additions to the cast. As Netflix mentions, Isaac will create waves when he moves into Maeve’s caravan park. This suggests that he may form a connection with our favorite character. However, this could cause some serious problems in Otis and Maeve’s love story.

The latest season of the series looks much more exciting than we all expected. Sex Education Season 2 will bring some significant changes in the relationships between our cast members. While some brand-new connections seem to have formed over time, there are a few things that fans must be worried about. Here’s everything to know.

Adam Is Still In The Military School

We were all rooting for Adam, and Eric’s newfound feelings for each other. However, the Season 1 finale left us heart-broken as Adam had to leave Moordale and move to a military school. Besides, he is still there in Sex Education Season 2 as well. However, he is still conflicted by his feelings for Eric. As of now, we can only hope that the characters find ways to get back together.

While we all knew that Season 1 finale brought two of our favorite Moordale girls together. However, we couldn’t have imagined Maeve and Aimee becoming BFFs this season. As Aimee finally ditched “The Untouchables,” she soon formed a relationship with Wiley. Besides, their bond seems to get even stronger in Sex Eduction Season 2.
On the other hand, the latest installment welcomes another unexpected friendship. Otis’ girlfriend, Ola, and Lily seem to be friends now. It’ll be interesting to watch the new bonds blossom over time.

Netflix pop teen show will soon return to our screens again. While it is set to air sometime in 2020, the streamer is yet to give us a firm date. However, like most other shows on the platform, Sex Education may follow an annual release pattern as well. Hence, the series may premiere as early as January 2020.
Are you excited for Season 2? Tell us in the comments below!