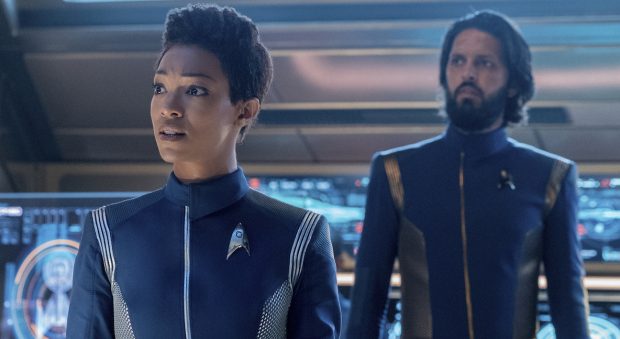 The finale episode of Star Trek: Discovery left the audience in all wonderment. However, CBS officially renewed the show for Star Trek Discovery Season 3 in February 2019, just a few weeks after the launch of the second season. The hardcore fans of the franchise are expecting a lot from the third season.
The show has become the massive success on CBS All-Access as the audience like the show. Julie McNamara, executive VP of CBS All-Access, expressed her views for the show while renewing it for the third season. As she stated, the massive success of the show exceeded their expectations in both subscriber growth and generating a phenomenal response from Star Trek fans, which made renewing the streaming service’s flagship series a no-brainer.
The show is the seventh series in the Star Trek franchise and is the first series in the franchise since Star Trek: Enterprise, which concluded in 2005. Star Trek Discovery is roughly set a decade before the events of the original Star Trek series. However, it is separate from the timeline of recent films. Star Trek Discovery follows the crew of the USS Discovery on various adventures.

All the major cast members of the show were expected to return. But Unfortunately, Anson Mount will not be reprising his role as Captain Pike. Despite his popularity, the actor had a single-year contract with the show, which resulted in his dismissal. Along with him, Rebecca Romijn and Ethan Peck also won’t return as the Starship Enterprise’s Number One and Spock.
However, the remaining cast is joining back for the third season of the show. Sonequa Martin-Green (Michale Burnham), Doug Jones (Saru), Anthony Rapp (Paul Stamets), Mary Wiseman ( Ensign Sylvia Tilly), Wilson Cruz (Dr. Hugh Culber) and other members are on board for Star Trek Discovery: Season 3.

Around the finale of the second season, Discovery stopped being a prequel to The Original Series. However, it turned out to be the far future series in the history of the franchise chronology.

The second half of the second season saw a massive space battle with Control and the Section 31 fleet with the fate of the entire galaxy at stake. Meanwhile, Michael Burnham, who led her starship to a one-way trip through a time wormhole, in order to keep the data they obtained away from enemies. However, the USS Discovery now appears to be trapped 950 years in the future.

What Fans Will See Next?

Season 3 of Star Trek: Discovery is shaping up to be a story that’s removed from anything familiar. It will feature a reasonable time jump. Showrunner Alex Kurtzman also confirmed about it in an interview with The Hollywood Reporter. The show will set in the 32nd century. However, the Discovery possesses a spore drive, which enables it to travel to just about anywhere in the universe. So, distance is no longer an issue for the starship.
Though the crew was able to neutralize Leland, there are quite some chances that Control can also come back. The third season would likely continue the arc of protecting the data and stopping the destruction of sentient life.

According to reports, The production work for Star Trek Discovery Season 3 will likely begin in July 2019. Although, it seems like the audience would not be able to see the crew of the U.S.S. Discovery for quite some time. CBS’s Jean-Luc Picard spin-off series is going to debut in late 2019, and there’s no space vacant for the third season of the show. Therefore, Star Trek: Discovery might release in spring 2020. However, CBS has yet to announce the official release for the third season.