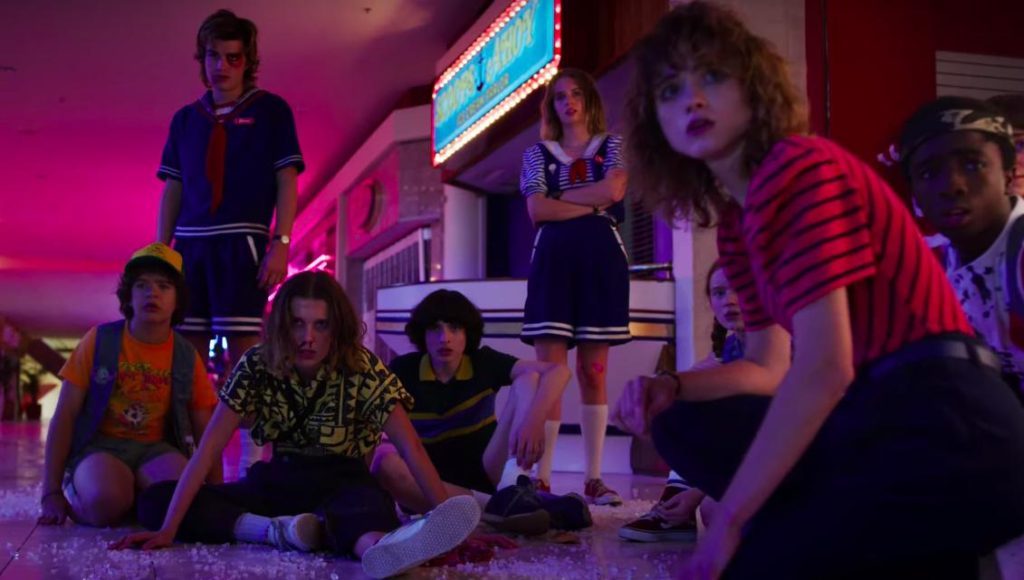 Stranger Things Season 3: Trailer Breakdown! What Can Happen Next?

The final trailer of Stranger Things Season 3 is out, and it’s hilarious. Netflix had us waiting for a painfully long-one and a half years. The official trailer gives us insight into what may happen in the next season. Our mighty heroes will return with all the strange things that happen in Hawkins, Indiana.
The show has received much critical acclaim since its release. Moreover, it also has a huge fan following who love the show for its intense plotline. The Duffer Brothers, creators of the show, are appreciated for the directorial perfection. The show debuted back in 2017 and became one the most loved Netflix Original.
The story of the show revolves around Hawkins, which is full of mystical creatures. A team of middle-school kids strives to solve the mysteries and figure out a way to get rid of the stranger things. Based in the 1980s, the sci-fi series is an amazing mixture of love, friendship, and secrets.

Netflix recently releases the official trailer of Stranger Things Season 3. It presents us the new looks of now-grown-up children. Moreover, it also tells us that Season 3 will not be easy for them all. Our favorite stars, Mike, Eleven, Dustin, Lucas, Will and Max, will be back in the new season.
https://youtu.be/YEG3bmU_WaI
Other important characters will also reprise their roles from the previous seasons. This list includes Will’s mom Joyce, Jonathan, Nancy, Jim Hopper, Steve and Billy. Besides, all these Stranger Things characters will bring us a new full-of-mysteries Season 3. To help the fans, we’re here with an in-depth analysis of the trailer to look for possibilities of what may happen in the next season.

Stranger Things Season 3: What Can Happen Next?

The previous seasons have been a rollercoaster of emotions for the friends. While Will (Noah Schnapp) drifted apart from the group, we also saw Dustin (Gaten Matarazzo) having problems with Lucas (Caleb McLaughlin) and Max’s (Sadie Sink) relationship. Moreover, Eleven (Millie Bobby Brown) also had difficulties in adjusting with the group and Max was yet to be accepted entirely. Fortunately enough, the season finale ended well for all of them.
Everyone was happy by the end and were dancing at the Snow Ball. Will was finally back, Lucas dances with Max, Mike (Finn Wolfhard) and Eleven kiss and Dustin find a special dance partner. However, Season 3 is expected to be complicated for all the friendships.
The trailer starts with Dustin’s comic reunion with the group. This hints us that our mighty heroes will finally reunite in Stranger Things Season 3. However, as the video proceeds, we get to know that Dustin is still jealous of Max and Lucas getting together. The footage also presents us with Will struggling with his life and eventually his friendship.

Hence, we can expect the group to get back together. However, they may still have some difficulties towards the end of the season.

The new season will give us new relationships among the Stranger Things characters. We will see Eleven and Max bonding and becoming close friends in the next season. Moreover, the girls are seen spending time with each other in the trailer. Along with them, we may also see more of Dustin-Steve friendship in Season 3.


The two bonded in Season 2, and now have become close friends as shown in the trailer. They meet up in the Star Court Mall, where Steve (Joe Keery) now works and greet with a special and funny handshake. Steve may also get close to the new girl that works with him at the ice cream parlour. Similarly, Nancy and Jonathan (Natalia Dyer and Charlie Heaton )are also together now in the third season. The couple fell for each other in the second installment, and as per the trailer, they now seem to apply for a job in The Hawkins Post, together.

We were also hinted that Hopper and Joyce (David Harbour and Winona Ryder) may get together by the third season. Though it is not confirmed in the trailer, we may still expect them to get into a romantic relationship by Season 3. Hopper was seen waiting for someone at a fancy restaurant in the trailer. We are unsure if he is expecting Joyce, thus, if not her we may get to see Hopper’s another love interest.

The newly inaugurated Star Court Mall will undoubtedly be a major hub in Hawkins. While Steve now works at the mall, Dustin seems to visit him once in a while. Max and Eleven were also seen at the Mall. The girls, especially Eleven was bewildered and excited to be there. But is it safe for any of them?

As the trailer proceeds, we dig into the darker sides of the Mall. Apparently, it is now stricken by the Mind Flayer and is dangerous for the people of Hawkins. The trailer then cuts to the footage where all our essential characters are stuck inside it. Moreover, they will certainly try to get out of it by killing the mystical creatures.

The finale of Season 2 was all about closing the gate to the Upside Down. However, as the story of Season 3 suggests, the monsters are back. The third season will struggle with the emerging of the Mind Flayer, the mega-monster that appeared in the closing scene of the second season. The trailer gives us the first close look of this creature, and it was horrifying.

Eleven apparently seems to struggle with her powers. Her telepathic skill takes her to different dimensions which hint her of the arrival of the Mind Flayer. Moreover, the teleporting to the dimensions may also have a different meaning, though we assume that they refer to the creature controlling Eleven.

The strange titles of the episodes get more complicating as we slowly get to know their meaning. The trailer shows us that Billy (Dacre Montgomery), Max’s evil step-brother, get bitten by some mystical creature related to the upside down. As we already know that the upside down based infections spread, we can assume that it may take over Billy and make him more evil in some sense.
The trailer also suggests that not just Billy, but several others will also be affected by the infection. Hence, this influence may create severe problems for the people of the small town, Hawkins. As one of the episodes is titled ‘The Bite,’ we may expect that Billy’s wound may play an important role in spreading the infection.

Hence, as per all the suggested theories, we can expect the third season to be mysteriously thrilling. Stranger Things Season 3 will take us on new journeys and will amaze us with all the secrets opening up. Moreover, it will end with all the fans wanting for more. All the viewers, including critics, have high expectations from the show.

The new season will premiere on Netflix, on July 4, 2018. It will release on the Independence Day of United States of America.