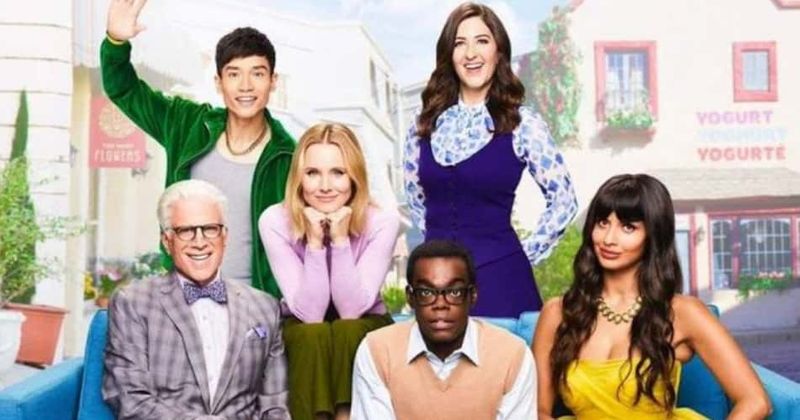 The Good Place Season 4is just mere weeks away from its grand premiere. NBC’s one of the most successful show is going to have the fourth season, which will serve as the final installment of the series. The renewal news of the show came before the finale of Season 3. And since then, the audience is in a whole lot of thinking about Eleanor and her friends.
The show focuses on Eleanor Shellstrop (Kristen Bell), introduced to The Good Place by Michael (Ted Danson) in her afterlife. The Good Place is heaven like Utopia that Michael designed. However, later, it comes out that she was sent there by mistake. Therefore, to continue, Eleanor needs to hide her immoral behavior and become a better person.

NBC recently released a first look promo trailer for the final season of The Good Place. The fourth season is continuing from the previous season, and Eleanor has joined Michael as a new neighborhood architect. She did this to test the group’s grand experiment. Also, Eleanor has been showing around the Good Place neighborhood to an old lady named Linda. She tells the lady that if she wants anything at all, Janet can bring it to her. To that, Janet conjured up a baby elephant made of pure light that tells the true secrets of the universe.

NBC recently released the first look of the characters from the upcoming season of The Good Place. The stills are from the premiere episode “A Girl From Arizona,” featuring almost the entire cast of the final season. However, the pictures did not give away much for the upcoming season but teased some reliable content.

Eleanor is all set to become the badass boss in the final season. As the picture states, the girl is in her business blazer, suited up to do something different. Eleanor is pretending to be the new Good Place neighborhood’s architect.

2. Janet and Tahani Sneaking Around

Also, it seems like Janet (D’Arcy Carden) and Tahani are doing some sneaking around in the premiere episode. From the picture, it looks like the two are keeping an eye on somebody or something important.

3. ‘Welcome To The Afterlife’ Party

The pictures also took us to another Welcome to the Afterlife first-night party.

4. Jason in his thoughts

In one shot, Jason is sitting alone by himself, delve in deep thoughts. Perhaps, he’s dealing with some moral difficulty relating to his girlfriend Janet and his former wife, Tahani.

Another picture features Tahani all pissed off, standing alongside Jason. Though it seems like Jason is not the reason behind all that anger. In the final episode of Season 3, Shawn placed gossip columnist John in the experiment to further torture Tahani. Therefore, maybe Janet and Jason are trying to help Tahani change her feelings towards John.


However, in all the images released by NBC, there is not a single glimpse of Chidi. The final episode of the third season saw Chidi losing his memory completely. Will he return for the final season? Or Not? This is now the biggest question after watching all these pictures.

By the end of the third season, Eleanor and her human crew realized that the points systems used to determine who must enter the Good and Bad Places is enormously flawed. Therefore, in the upcoming season, all of them will try to prove that all humans are not deserve to be sent to the Bad Place after they die.

All’s good that ends good. ✨ Meet us in #TheGoodPlace for the final season Thursday, September 26 on @NBC! pic.twitter.com/cSmYvzfUqf

— The Good Place is taking it sleazy (@nbcthegoodplace) August 9, 2019

The Good Place Season 4 is scheduled to return on September 26, 2019, on NBC. The audience is desperate to see how Eleanor and the rest will change the entire concept that has been running for so long. Also, how Chidi will come back into the plot is the biggest question to get answered.