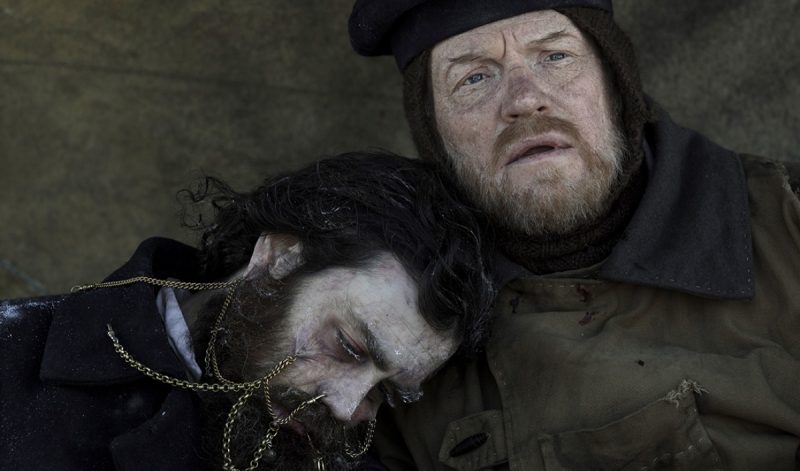 The Nightmares are about to begin again. One of the most awaited shows of this year, The Terror Season 2 is coming soon. The television network AMC renewed the show for a second season in June 2018. An immense number of fans admired the show for its gripping plot and unique content.
With debut season only, The Terror has managed to earn a loyal fanbase. The horror-history-fiction series was well received by the critics as well as the audience. The Terror could be another star horror genre series in AMC’s list. With the confirmation of the sequel, fans are eager to know more about the release of The Terror Season 2.
Recently AMC has announced the title of the sequel – Season 2 of AMC’s horror anthology will be titled “The Terror: Infamy.”
Developed by David Kajganich, The Terror is an American horror anthology series. It is based on Dan Simmons’ novel of the same name, the famous book was released in 2007. The debut series premiered on AMC on March 25, 2018.

The Terror Season 2 Plot: What Fans Will See?

The debut season of The Terror portrayed a fictional version of Captain Sir John Franklin’s foredoomed voyage to the Arctic. It started in 1847 to find the Northwest Passage. The first season focused on Royal Navy’s ill-fated arctic journey and how their ships froze and isolated in harsh weather.
The Terror is established as a series which strives to acknowledge true stories. The Terror Season 2 will emphasize more on keeping it real rather than fictionalizing everything. Showrunners desire to make the new season timely and relevant.
Co-creators of the upcoming season will be Alexander Woo(True Blood) and Max Borenstein. Max is famous for Godzilla, and Kong: Skull Island. The duo will also executive-produce the second part alongside the first season executive producer Ridley Scott.
Unlike the first season, the story of The Terror Season 2 will not be based on any book. Instead, the second installment will be set during World War II. It will center around a ghostly phantom. The supernatural entity threatens the Japanese-American community. Due to which they moved from their native Southern California to camps kept in captivity in the war.

The Terror Season 2 Cast: What are the new additions to the Cast?

AMC recently announced that George Takei (Star Trek) may join the cast. Takei is a renowned actor, author, and activist. He will also serve as the consultant for the series.


AMC previously announced that Derek Mio (known for Hawaii Five-0) would join the cast of the second season as Chester Nakayama. Chester is the center of the story and will go against the paranormal soul in The Terror Season 2.
Along with them, Kiki Sukezane from Lost in Space will star as Yuko. Yuko’s character is a mysterious woman from Nakayama’s past. Moreover, Shingo Usami will pursue as Chester’s father, Henry Nakayama. Naoko Mori will star as his mother – Asako Nakayama. Miki Ishikawa will join as Nakayama family friend, Amy.
Yuki Morita, a Japanese/Candian actress, famous for Godzilla, will also join the cast. However, her role is still not specified.

In June 2018, AMC announced that The Terror Season 2 might be a ten-episode series. The TV network also said that the series might premiere in 2019. However, AMC has not declared a firm release date yet.
Horror as a genre has never received the value it deserves. Though, recent shows and films have increased the bar for such a worthy genre’s future. Thus, The Terror has found its unique spot. AMC is a spoiled network with TWD in its pocket. However, The Terror Season 2 may become a gem in the list of AMC’s potential content.