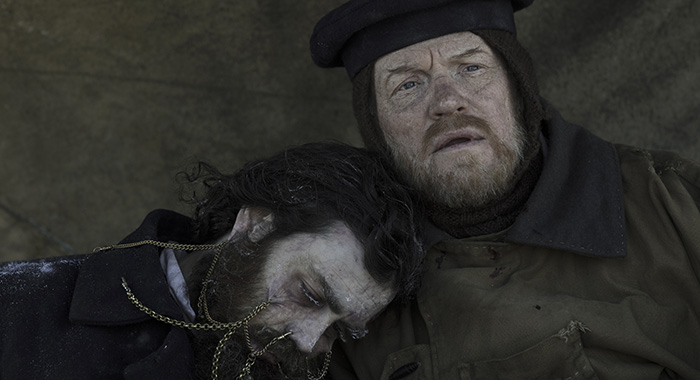 The Terror Season 3: Renewed Or Canceled? What Will It Be About?

After the crazy hauntings of the yurei ghost, will AMC give us another chilling story? Ever since the second season of the series returned on television, fans are wondering if the TV network will ever renew The Terror Season 3. Viewers did like the sophomore installment, although it sure wasn’t as good as the critically-acclaimed first one.
The anthology series picks up its story from Dan Simmons 2007 novel. The first set of episodes focuses on a mid-19th century’s real-life British ship called Terror. In an attempt to find the Northwest Passage, it gets stuck, frozen, and isolated somewhere in the way. All crew members aboard try to survive in the harsh conditions with a supernatural element causing menace.


With the way Season 1 performed, AMC had to renew the series for another run. Hence, the drama shifts its source from another storyline, now set around the time of World War II. It puts its focus on the United States’ Japanese internment camps and follows a family being haunted by a yurei ghost. The setting is as intense as the first part, yet fails to be as impressive.

As of now, AMC is yet to state any details about the much-anticipated The Terror Season 3. The second installment did not perform as well as the debut one and bagged much lower ratings. However, we still can’t ignore its Rotten Tomatoes numbers. Being an anthology series, there’s still chance for the show to reform everything that Season 2 missed.


Besides, The Terror was one of AMC’s highest-rated show, and the network may not cancel it so early. However, the second season barely took a few weeks to get a renewal after. As of now, fans have been waiting for around three months to get any insights about the third chapter. Well, currently, we can only hope to get a green flag as soon as possible. Do you want another season? Tell us in the comments below.

What Will The Story Of Season 3 Be About?

Being an anthology, the series limits us to make any guess about the plot of an upcoming season. The first two chapters were completely unrelated. Hence, it’s evident that we won’t visit The Terror ship or the Nakayama family again. Although it’s certain that The Terror Season 3 will focus on another historical event and its relations to a supernatural element. Besides, fans can also expect another folklore this time.

As of now, we can only hope for The Terror Season 3 to perform better in case it’s greenlit. Given the fact that Season 2 under-performed, AMC may expect the third attempt to work out in order to renew the series any further. Similarly, the showrunners have to level up their game to keep the audience interested. Besides, it’s fair to expect an improved storyline and script this time.

Given the fact that we don’t have a renewal yet, it’s hard to predict an air date. However, the horror series may take as much time as the second one did. After its March 2018 debut, the AMC show took around one and a half years to return. Accordingly, we can expect The Terror Season 3 as early as late 2020 or early 2021.