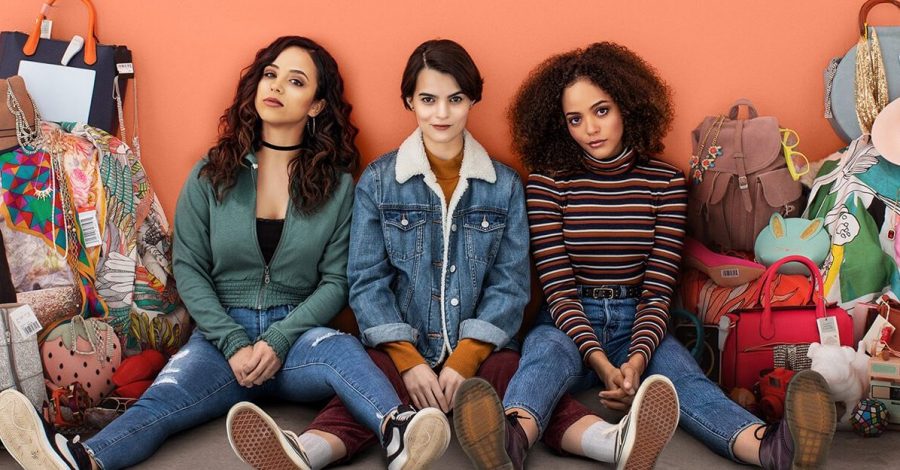 The trinkets stole our hearts like one of their shoplifted items, and we’re glad they did. Fans loved the shoplifters, Elodie, Moe, and Tabitha, and want them to return in Trinkets Season 2. Netflix left us with a cliffhanger which hints that our current favorite show may be back on our screens again. Although the streaming platform is yet to announce an official renewal. So are they ever returning? If yes, when will they be back?
Netflix’s trending show isn’t like any other teen drama. Trinkets is based on a unique topic that we’ve never thought of before. Three high school girls, Elodie, Moe, and Tabitha, shoplift to distract themselves from their messy personal lives. The trio connected over Shoplifter’s Anonymous, where they formed a strong and genuine bond. However, the girls still have to deal with the problems they have in their respective lives.

As mentioned above, Trinkets Season 2 is yet to get an official renewal from the streaming platform. Although, it’s currently too early to expect another installment. The teen-drama premiered on June 14, 2019, and Netflix usually takes a month to renew a show for a second run. The one month delay is to analyze if a series is successful enough to worth a new season. Luckily, as of now, many of the fans have given positive reviews for the show, which might be one of the many reasons to have a renewal.

Fans around the globe have shown much love for the characters and the show, despite it being an unusual concept. A large number of teens are demanding another installment for the still fresh series. Looking at the high demand, Netflix must give our trinkets another chance. Moreover, we hope that there may be more and more seasons to come.
https://twitter.com/crisxjoanax/status/1140287852561018881
https://twitter.com/ArianaPoulsen/status/1139988470326128640

Trinkets Season 2: What Will Happen Next?

The shoplifting trio gets into much trouble as they reach the end of the debut season. Elodie runs away from home, while Moe or Tabitha may get arrested for stealing Brady’s prized car. The new season will feature the struggles that the trinkets face as they fight these troubles. Moreover, as per the way Season 1 ended, several new obstacles are coming their way in the upcoming installment.
On the positive side, the BFFs may even reunite after everything that happened in Season 1. Moreover, we hope that the three of them find ways to fix the mishaps they’ve committed on their shoplifting spree. Fans fear that Brady may attempt to trouble Tabitha and Moe again. However, hopefully, the bratty abusive ex-boyfriend pays the price.
As the sirens wail in the season finale, we know that Tabitha may get arrested for what she did with Brady’s car. However, some fans believe that Moe may be the one being targetted this time. After Moe punched the bad guy in the face, Brady seems to seek revenge from her. And while he called the police, we do not know if he blamed her or Tabitha or even both of them. For now, we’ll have to wait to know who gets behind the bars in Trinkets Season 2.

When Will It Be On Our Screens Again?

The popular streaming platform has kept us waiting for the renewal of the series. We can only think of getting a release date once the show gets greenlit. However, Season 1 took only eight months to debut after its making was announced. If the Trinkets Season 2 renewal reaches us by next month, we may get to see the trinkets back on screens by early to mid-2020.