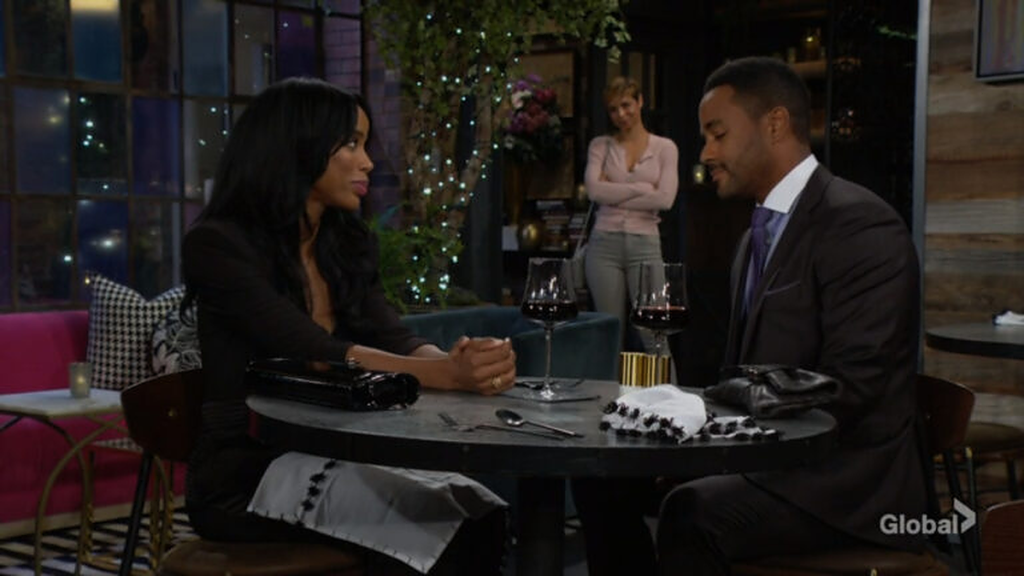 The Young And The Restless Preview Video For The Week Of May 30-June 3, 2022: Imani Seduces Nate; He Cheats On Elena?

The Young And The Restless preview video for the week of May 30-June 3, 2022, is out. It reveals that viewers are in for some steamy moments. To begin with, viewers know that Imani wants to steal Nate from Elena, so she will try to achieve that. In the preview, Imani will try to impress Nate and want him to join her for a shower. We can also see Nate trying to confess something to Elena. Did Nate Cheat on Elena? Keep reading to find out.

Starting off the preview, we can see how Imani tries to drop hints that she and Nate have a lot of things in common. In the coming week, Imani will level up and try to tell Nate that they have a connection. Nate is well aware of how Imani feels about him and might do things to keep Imani off his back.

Moving forward in the preview, Amanda will understand what Imani is trying to do and warn her sister not to mix business and pleasure. Moreover, Amanda might also be uncomfortable with Imani and Nate getting closer. But Imani won’t listen to her and tell her to back off. All Amanda will want is for her sister to stop playing with fire.

The Young And The Restless: Imani Seduces Nate; He Cheats On Elena?

Later in the clip, we can see Imani’s next move will be a bold one. She starts going upstairs when Nate asks her where she is going. Viewers know that they are supposed to be having a business meeting. However, Imani tells Nate

that she does her best thinking in the shower and proposes Nate join her. The preview doesn’t show Nate, but he is in a tough position. There is a possibility that Nate will give in to the temptation and cheat on Elena.

After a while, we will see Nate has something to tell Elena. Nate says he’s guilty and doesn’t want to wait to confess. By the look on Elena’s face, she already seems heartbroken and concerned. We don’t know if that confession is about cheating on her or Nate giving mixed signals to Imani. After all, Nate knew how Imani felt about him, so he should have been smart about it. We have to wait and watch to find out what really happened.

Only time will tell whatever is going to happen next. Until then, stay tuned. TV Season & Spoilers is your one-stop for all your soap-related updates. The Young And The Restless airs on CBS all weekdays. Don’t miss the action. In the meantime, watch the preview video: