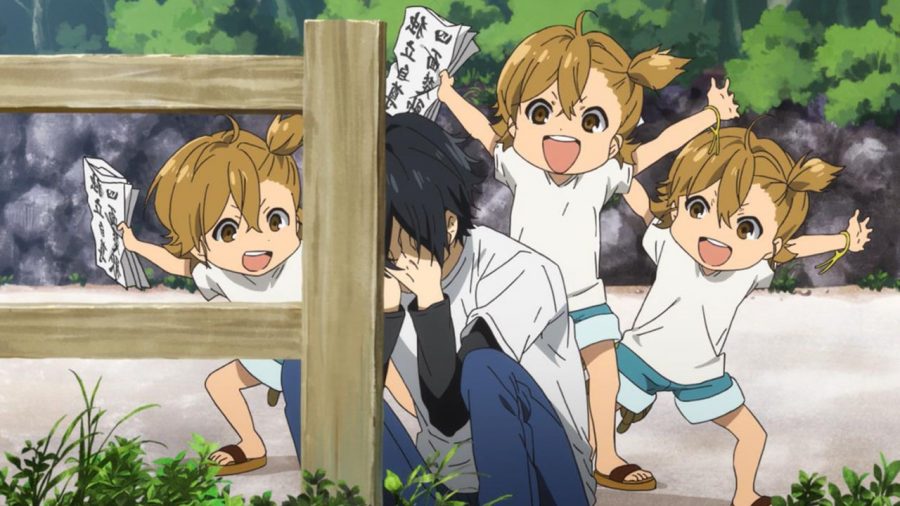 Life is surrounded by many troubles, and funny anime turns out to be the best remedy for that. They can make you cry your tears out on your most unexpected moments. Anime tends to show goofier looking character to add-on the genre of comedy. Anime always include exaggerated facial expressions of the characters that will make you laugh out hard. One aspect of humor in funny anime comes from the situations and weird circumstances the characters get trapped in.
In the genre of action, thriller or mystery, the tincture of comedy is must to develop more interest in the anime. Here we present you the best 15 funny anime series that demand your attention. We hope that you’ll enjoy our hilarious list.

If you are in trouble, then call for SKET Brigade. They are always to help you. If not, then they’ll probably be fooling around in the clubhouse for your entertainment. The full form of anime goes like Support, Kindness, Encouragement, and Troubleshoot but due to their lack of meaningfulness, they are just a bunch of handymen. This anime purely holds the genre of comedy. The silliness of the SKET Dance will make your day brighter than ever.

14. Arakawa Under the Bridge

A homeless girl named as Nino saves Kou’s life from drowning, but in return she wants him to be her boyfriend. Ever since he was a kid, his father taught him always to repay the debt taken from another person. Therefore, he agrees to stay in the isolated area with Nino. Kou’s new life begins under the Arakawa Bridge with the strange, eccentric and weird creatures who call it their home! Overall anime is heartwarming and will leave you laughing hard.

13. Baka to Test to Shoukanjuu

Fumizuki Academy is an elite school that strictly divides the students based on their tests results. Under the dictatorship of Akihisa, Class F decides to take over on the best facilities in the school campus. Their hilarious methods and wishful thinking lead to many funny situations that will make you laugh out loud.

“Haven’t You Heard? I’m Sakamoto” demonstrate its spotlight of being cool. Sakamoto’s only motto is to be cool in school. Out of jealousy, his classmates make up some weird situation in which he’ll lose his coolness. But our protagonist in the series has promised us never to lose his cool.

In Seika high school which is infamous for rowdy boys. The school has been recently converted into a co-ed school but still holds the majority of boys. Misaki Ayuzawa works hard in academics to make the school a better place for girls. Misaki is known as boy hating strict demon in the school. Unfortunately, Tatsumi Usui discovers her secret of being a part-timer maid in a cafe. You can look forward to the hilarious behavior of Tatsumi holding onto her biggest secret.

Seishū Handa, a young successful professional calligrapher, leaves the urban city in order to find his own original writing style. Despite getting insulted by a renowned curator about his calligraphy, he continues to practice in his own way in the remote area.
But the problem arises when he finds the lifestyle of village people is different than urban people. The day to day life struggles of Seishū in this funny anime is what you will love the most.

The story deals with the adventures of sextuplets of Mr. Osomatsu. Rather than making characters more meaningful, animators throw caution to every viewer by presenting six brothers as monsters and capable of ruining anyone’s day.
Osomatsu-san never fails to make its viewers laugh. The brothers make sure to create some funny situations.

After badly failing in the college entrance exams, Yuugo Hachiken decides to take admission in an Ooezo Agricultural High School in a remote area. So to prove his parents, he moves from urban city to a remote district to study agriculture. In the course of series, he tackles the situations in the remote village. These situations will make you laugh from the very moment he joins the school.

It is strange for you to find a baby inside a man who is floating in the river. But not for Tatsumi Oga. Oga is chosen to raise the Great Demon King’s baby with a maid named Hilda. They come to live in the house of Oga with the baby boy. Actually, he doesn’t want to raise the baby. If he wants to leave the baby, he needs to find a suitable babysitter who has similar strength like Tatsumi.
Now Oga goes on the journey to find a suitable babysitter to raise the Greatest Demon King’s Baby. The funny incidents follow him everywhere throughout the journey.

Pretty boys from the Ouran high school come together and form a host club. This is a reverse harem that adds on the genre of comedy anime very interestingly. The girl Haruhi enters the school looking like a boy because of her masculine body. His boy appearance is so tricky that girls really find Haruhi so attractive. To repay the broken vase that costs 8 million Yen, Haruhi has to join the Host club of this elite school. Without telling anyone he secretly joins the club, and she brings storm in their school. This anime trap will make sure to put a smile on your face from the very beginning.

What do you do when you find out that your crush is a renowned Shoujo manga artist? Ofcourse you will become his assistance in order to get close to him. That’s what happened with Chiyo Sakura. Her secret crush is actually a manga artist, and she helps him in his one or two drawing. But the problem is he doesn’t really know how to love a girl. But his preparations and efforts are so cute and funny at the same time.

4. The Devil is a part-timer

The Demon King’s dreams to conquer the world shattered into pieces after being confronted by the hero Emilia. Moreover, he got banished into the modern world of Tokyo. In the new world he entered, he disgraced himself as a part-timer in a food restaurant for a living. The lifestyle of Demon King changes as a mere part-timer in the modern city. One day he accidentally meets the hero Emilia who chased Satan in the new world. The twist in the story brings out laughter in various ways. Moreover, the change in circumstance in their daily lives will surely make you laugh.

What did you expect? Romance or Harem? Nope, it’s not at all about these. Daily lives of high school boys offer the story of a bunch of guys that are going through the puberty. Their coming of age endeavors the sanity from their world. Daily Lives of High School Boys features self-aware comedy in which the boys are muddling their lives through adolescence. Their creative minds lead to hilarious incidents make it one of the best funny anime.

The equation of love triangle always produces confusion as well as comedy. This classic comedy show features one female protagonist who has a massive crush over her eccentric and enigmatic classmate. But as we mentioned above, this is a story of a love triangle. Another girl crushes over the same guy in the class that makes competition among the two girls who try to steal the guy’s heart. Plans made? Yes. Successful? Nope. Hilarious? Absolutely. This classic comedy passes the test to stand in the list of one of the best funny anime ever.

The series offers a refreshing vibe through character’s silliness and truly deserves the title of best funny anime. Gintama features a protagonist who is trying to make a few bucks in this world of the feudal system. Everyone loves the anime for its humorous and ridiculous moments. Moreover, for some action in the series, “Amanto,” the aliens who invade the earth as their new home. Brave Samurai takes out their arms to face them in order to save humanity. With a tincture of romance and action, this comedy anime is the complete package of entertainment.