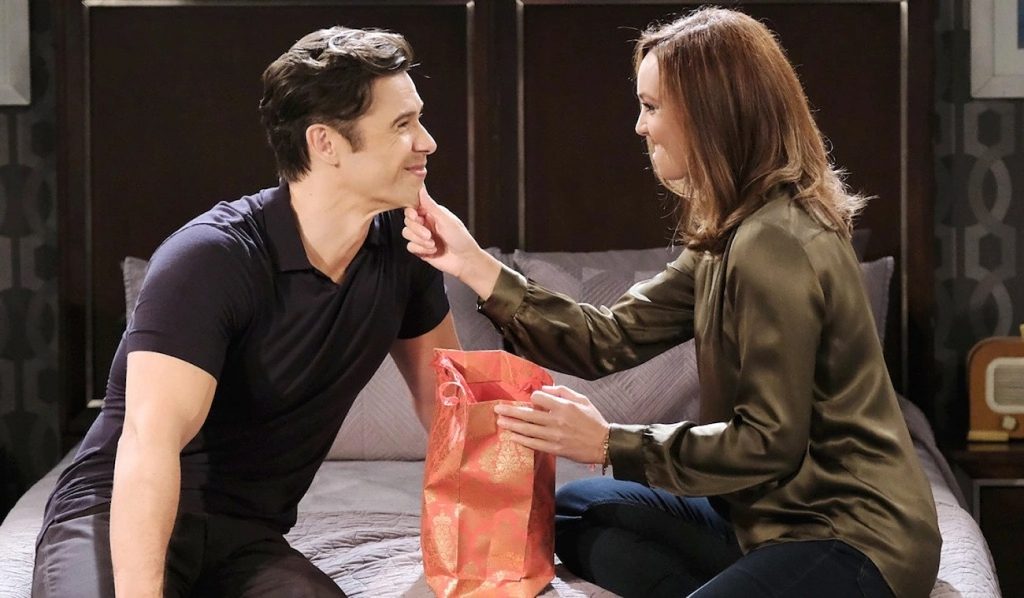 Days of Our Lives: Gwen And Xander Reunite As Xarah BREAKUP

Days Of Our Lives spoilers tease that Gwen and Xander might reunite in Salem after Sarah dumps Xander. Once Sarah learns about Xander teaming with Ava for money, she won’t want to be with a criminal anymore. Could this lead to Gwen and Xander’s reunion? Keep reading to know what might happen in the storyline.

Xander’s Guilt Leads Him In the Wrong Direction, Will He Pay For It?

Xander had a heated argument with Victor and decided to leave the Kiriakis mansion. Well, that was the start of all the problems. Days Of Our Lives spoilers tease that Xander and Sarah will get into a disgusting motel. A room full of bugs and roaches, Sarah will be horrified to see the room. More than her, Xander will feel guilty that he is not able to provide Sarah with a comfortable living space.

That will be the triggering point when Xander decides to take Ava’s tempting offer. As for Ava, she needs to take revenge on EJ. And for that, she will approach Xander since Gwen will reject to help her. Ava knows that Xander has few debts on him, so she will want to team up with him. The Days of Our Lives spoilers say that Ava will ensure Xander that she will take care of his debts, and in return, he will have to do her task. Her task will be to kidnap EJ’s beloved mother, Susan, and enjoy seeing him hurt. Even though Xander will be shocked, his situation will ultimately push him to accept the offer.

Now, things will go downhill when Xander will get him officially involved. Since Sarah warned Xander not to get into the shady business, he will now have to hide things from her. Looks like Sarah will be able to sense that Xander is behaving in a suspicious manner. What will Sarah do when she learns about Xander and Ava’s evil partnership? Let’s discuss that.

As previously mentioned, Sarah made Xander promise that he would never indulge himself into any risky or shady business. Sarah would never want her better half to be some sort of criminal who hurt others for money. When Sami offered one million to ruin Eric and Nicole’s anniversary party, he went there and revealed about the hookup. That revelation ruined Nicole and Eric’s wedding forever. However, this was a big blow for Sarah since she never thought Xander would hurt someone for money. Later, Sarah also threatened to end the marriage if Xander didn’t stop.

Well, now, Xander has broken his promise. So, what will Sarah do when she learns about Xander and Ava’s evil partnership? Chances are there that she might dump him and call off the marriage. She will never want a criminal to be her husband. So, if this happens, then Xander will become single. As the spoilers tease that a new reunion might come, this might be the one – Gwen and Xander!

Fans know that Gwen and Xander were in a relationship earlier. Also, when Jennifer attacked Gwen, and she landed in the hospital, it was Xander who was concerned for her. Also, Gwen always accepted Xander for who he is. She never questioned his shady business. So, chances are there that Xander’s concern for Gwen might become the base for sparks between these two former couples.

After Sarah dumps Xander, will he end up reuniting with Gwen? Well, if this thought even crosses Xander, will Gwen be willing to do it? Just now, she decides not to give more trouble for her family. So, will she pair with Xander? We will know that. Days Of Our Lives airs every weekday on Peacock+ in the US and on the W Network in Canada. For more updates and spoilers, visit our website, TV Season & Spoilers.