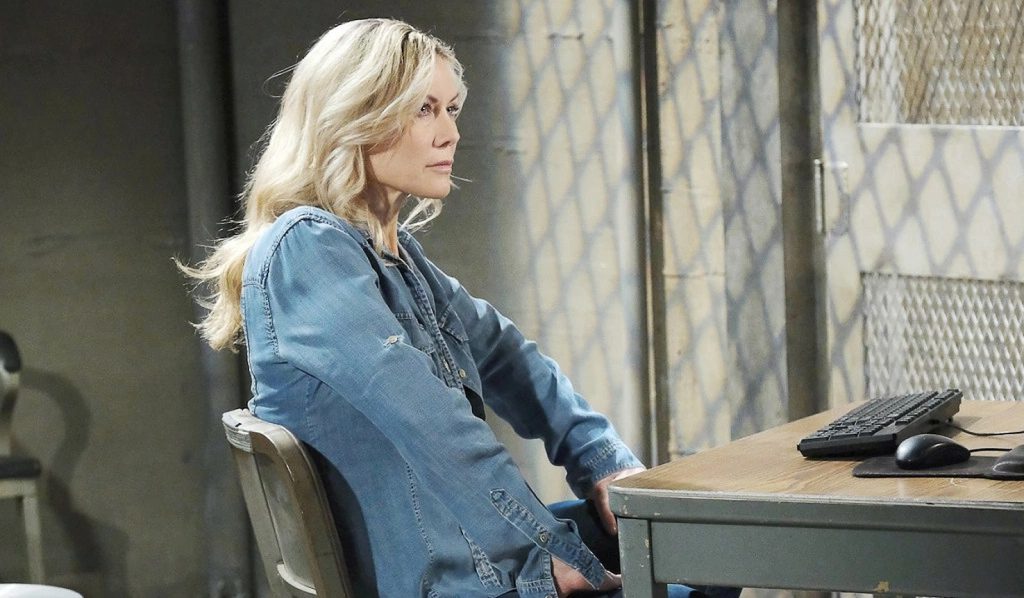 DOOL/Kristen (Stacy Haiduk) gets arrested!
Days of Our Lives Spoilers

Days Of Our Lives Spoilers For The Week Of January 16-20, 2023: Bonnie Helps Sarah, Kristen Is ARRESTED

Days of Our Lives spoilers for the week of January 16-20, 2023, reveal that Bonnie will have shocking advice for Sarah. Instead of asking her to leave Xander, Bonnie’s advice will shock Sarah, and she will wonder what she is up to. In the meantime, Gwen will come to rescue Xander, who will be completely drunk and unconscious. On the other end, Chad will also comfort Stephanie over her mother’s demise and Alex’s manipulation. Elsewhere, Kristen will be in a huge problem. Will she end up in jail, finally? Keep reading to know what is brewing in Salem next week.

First, Steve will decide not to sit and watch the drama but rather take things into his hands. Days of Our Lives spoilers say Steve will decide to make Kristen pay for all her deeds. So, he will confront her and pry a confession from her. Luckily, Kristen will confess that although she had the orchid and used it as leverage, she never wanted anyone to die because of that. Once she confesses her crime, Steve will be clever enough to record it. Looks like he will hand over the recording to Jada and Rafe, who will start searching for Kristen.

As for Kristen, she will come to know about Steve’s actions and will fret over her future. She will decide to escape the town with Rachel. The Days of Our Lives spoilers say Kristen will ask for help from EJ in escaping, but he won’t be interested in doing that. No matter what happens, her plan will fail miserably, thanks to Rachel. Looks like Rachel will see Brady and Chloe too close together and will create a ruckus. She will call out Chloe for getting closer to her father and will lash out at them. This chaos will be enough to alert Rafe and Jada about Kristen’s location.

Once they track her down, she will be arrested and put in jail. Days of Our Lives spoilers claim Jada and Rafe will soon celebrate her arrest in the aftermath. However, fans know that Kristen can plot evil plans even in prison. So, it will be interesting to see what she will do next. Stay tuned for it.

Next, Marlena will wish to die in the home, but John will have other plans. Days of Our Lives spoilers say John will ask Johnny to make some arrangements. Johnny and Chanel will prepare some slides with photos that show Marlena and John’s love life from the start. Belle will also return back to spend some last moments with Marlena. As for John, he will bring Marlena to the hospital’s rooftop, where they will share a special moment together, reminiscing about their love life. This is when Marlena will also die in John’s arms.

Over with Stephanie, she will become an emotional wreck and will lean on Chad for some comfort. She will deal with the loss of her mother and also Alex’s last-minute manipulation, which cost her a final goodbye with Kayla. Chad will support Stephanie in her ordeal. Days of Our Lives spoilers say Stephanie will also share some memories of Kayla with her brothers, Tripp and Joey. Back with Chanel and Johnny, while working on the slide, they will also come a bit closer to each other.

Stephan Rips Off Into Li

Finally, Stephan will rip into Li for brainwashing him and using him as some laboratory rat. Days of Our Lives spoilers claim Stefan won’t forgive Li for what he did with him. At the same time, he will also blame Gabi for chasing him and confusing his feelings for Chloe. Li will come for Gabi’s defense and will make it clear that she is behaving like that because of him and the brainwashing.

As for Gabi, she will continue to convince Stefan to get reverse brainwashing. However, he will want to be with Chloe and have a future with her. Will Gabi get pissed with his decision and come up with an evil plan in the future? Could Gabi force Stefan to get the treatment? We will know soon. Days Of Our Lives airs every weekday on Peacock+ in the US and on the W Network in Canada. For more updates and spoilers, visit our website, TV Season & Spoilers.