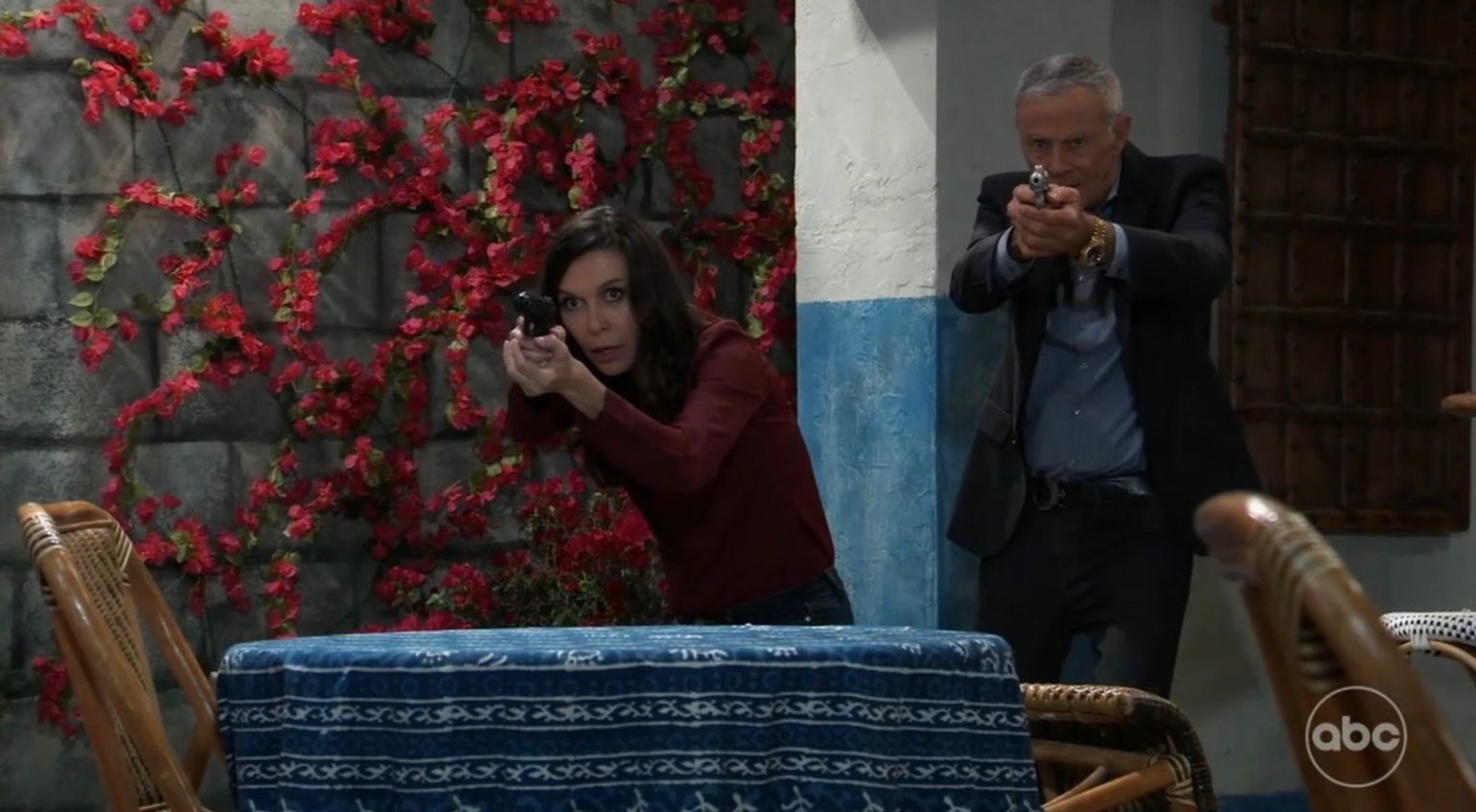 General Hospital Spoilers for the upcoming two weeks are out. And they tease that a mysterious man will enter the scene. Viewers will also get to see some brutal scenes within the show. Valentin will face some injuries, and he will end up in hospital. Sonny will also get an unexpected phone call and he will be shocked.

In the week of October 18-22, Victor will take back his orders to kill Peter. Whereas Drew will make efforts to escape Peter’s grip. Spoilers reveal that Britt and Jason will land in Greece and move forward with their mission. Lastly, a brutal shootout will result in some blood-spilled injuries.

Then in the week of October 25-29, spoilers tease that Michael will be seen frustrated over something. And Gladys will cause trouble for Sasha. Some mysteries will also unfold regarding Portia and Curtis’ stalker. So, let’s get to know what is there on the way in the next two weeks of General Hospital.

Starting off the week of October 18-22, spoilers claim that Victor will spare Peter’s life. Although, he will still have an eye on him. More Peter-related spoilers suggest that Drew Cain

will try to break free from Peter’s control. Although it won’t be as easy. Drew’s escape depends on Liesl’s assistance. Let’s see will Drew be able to escape or not?

According to GH spoilers, Britt and Jason will fly to Greece to proceed with their plan to find Liesl. Over in Greece, Jason and Britt will come across some familiar faces. Since Anna, Robert, Dante, and Sam are already there chasing the truth. So, will Britt finally find her mother? Only time will tell.

General Hospital spoilers hint that, despite Anna’s warning, Sam and Dante will enter Victor’s compound. Spoilers also claim that the crime partners will succeed in capturing Victor. He will reveal everything about how Peter activated Drew’s old conditioning and has turned him into a killer. Next, Sam will see “Scout” engraved on Drew’s empty cell wall. So, she will feel like the real Drew is still in the cell clamped by the deadly programming.

Further spoilers tease that in next week, GH viewers will witness some shootout. First, Sam and Dante will get an update about the compound shootout. Then, tensed Sam will get anxious to find out about injuries and deaths at the shootout. Since we know that Valentin will land in ICU soon, there is a possibility that he might be the one who gets injured in this showdown.

Meanwhile in the upcoming General Hospital episode, Sonny will visit his nephew- Spencer. Speculations suggest that these two will be up to something. Sonny will meet Spencer before his arraignment and he might help him. Will Sonny be able to bail out Spencer? Only time will tell.

As far as Spencer’s court proceeding is concerned, Cameron and Josslyn will stand by him. But the question is, what about Trina? Will she forgive Spencer and come to court to support him? Speculations are that Trina might not forgive Spencer. However, she will show her concern towards him.

General Hospital spoilers suggest that Nina and Michael will also make a deal. It looks like it will have something to do with baby Wiley. So, would Michael allow Nina in Wiley’s life? The upcoming week of October 25-29 will bear all the answers.

General Hospital Spoilers For The Week of October 25-29: Jax Confession Will Frustrate Michael

General Hospital spoilers suggest that Jax will make a confession that will turn the situation into despair. In the week of October 25-29, Jax’s confession will provoke Michael’s reaction. Will Jax tell Michael about Sonny’s romantic relationship with Nina? Spoilers also suggest that Michael’s anger will become a concern for many. On one hand, Willow will worry, and on the other Sonny and Carly will get anxious because of their son’s misery.

GH viewers know that Ava surprised Nina when she advised her to fight for her man. She will believe that Nina still has some trick up her sleeve. What will this trick be? Speculations are that it could be Phyllis. Or it might be Nina’s intimate relationship with Sonny. Will Nina fight for Sonny? It is yet to be revealed.

Spoilers claim that in the upcoming episode, Sasha will face some betrayals. It looks like Gladys will cause trouble for Sasha. But Brook will snipe at Gladys with Maxie by her side. Spoiler hints that by the weekend, anxious Willow will confide in Sasha. More spoilers suggest Willow will ask Michael to be honest. So, viewers will see if Michael and Willow will have an honest conversation together. Will they be able to resolve anything?

General Hospital claim that the show will slowly unveil the mysterious guy stalking Portia and Curtis. Spoiler hints that Portia will stumble upon a stranger. And it will give Curtis and Portia room to ponder about the intention of the stranger stalker.

GH spoilers suggest that Sonny will put an offer for Charlie’s Pub. But, will Ava accept? Ava might not like the idea of selling the pub. However, as speculations has it, Sonny might want to gift the place to Phyllis. However, Ava will not like Sonny’s proposal at all.

Celebdirtylaundry.com suggests that Nina will see this as an opportunity. She will want to change Ava’s mind and score some points with Sonny. Nevertheless, spoilers reveal that Carly will niggle on Nina because of her victim mentality. And she will continue her avenge from her.

Some General Hospital spoiler hints that Sonny will get a surprising phone call that will shock him. So, it will be an enthralling moment for viewers to see whether it’s Nina or someone else calling. Lastly, Spencer-related spoiler claims that Spencer will be shocked when he overhears something. It looks like that might be something related to Esme’s mysterious moves.

By the end of the week, spoilers hint that Valentin will end up in ICU, where Elizabeth will care for him. Meanwhile, Anna, who has realized her love for Valentin, will hope and worry for Valentin. A lot of bumpy rides are there for General Hospital viewers in the upcoming episode. So, don’t miss out the action.