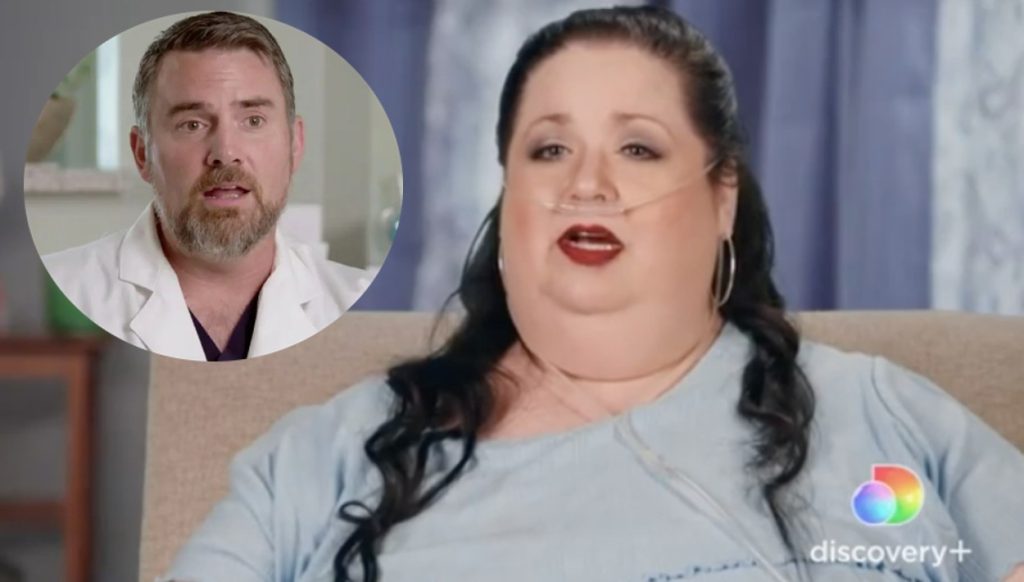 Meghan Crumpler and her best friends’ lifestyle gets documented on the show 1000 Lb Best Friends. Well, she has already had surgery for weight loss before joining the show. But after that, she has been facing issues in shedding pounds. The star has been struggling to find perfect fits for her big day even i.e., her wedding. However, her will to lose weight is still on, but her efforts are lacking. So, recently visited her doctor Charles Procter with her best friend Tina and ended up feeling pathetic. Thus, Meghan went into a meltdown moment. Tune in to know why the doctor made her feel so miserable.

Meghan Crumpler was initially on the reality TV show Too Large, and her journey was so motivating yet full of drama. So, TLC chose to give her own show, 1000 Lb Best Friends, where Meghan and her best friends showcase their weight loss journey. Apparently, it is hard for the celeb as she has a bunch of insecurities surrounding her all the time. There have been several incidents on the show when she felt like a failure. Recently, TLC shared a teaser video of the show on their Instagram account. It hints at the drama in the upcoming episode. Meghan seemed pretty upset after meeting her doctor, Dr. Procter

. She even had a meltdown and moved outside his clinic as she couldn’t bear him anymore.

Doctor Procter uses hard methods in dealing with his clients. Well, he feels that this way, his patient will listen to what he says clearly. Meghan, on the 1000 Lb Best Friends, said, “Last time I was in Procter’s office, his words literally struck me to the core”. He stated that she was one of the “less successful” ones he had ever seen. Additionally, the doctor asked her whether she was following the program she was supposed to do or not. To that, she replied, “Not all of it”. He smirked a little bit as he knew Meghan was not focusing on her weight loss programs. In the end, she said that this was the reason she did not want to come to his office. Fans got excited after seeing the teaser video, as it ensured drama. Some showed sympathy towards her, while others felt she was a “quitter”.

1000 Lb Best Friends: Meghan Is Looking For A Wedding Dress For Her Big Day

Meghan and her beau Jon exchanged rings in February 2021, and now they are planning to tie the knot. The couple’s wedding seems to be in the upcoming 1000 Lb Best Friends episodes. But with the big wedding comes big responsibilities, especially choosing the right outfit. Meghan took her best friends to dress shopping as it was their bridesmaid duty. Tina Arnold, Vannessa Cross, and Ashley Sutton accompanied the future bride. However, the shopping didn’t go well, as the bride struggled with her wedding gown. She tried different dresses but was unsure if she felt like a bride. The castmate stated it was as if she was unable to handle it. Her friends believe she was not excited about her wedding after trying so many outfits.

Meghan’s girlfriends were not sure about her tying the knot. They weren’t sure if she was doing it because of love or merely not wanting to end up alone. The other cast member of 1000 Lb Best Friends, Vennessa, felt that Meghan wasn’t as excited as she should have been. Crumpler described her life as being in a million pieces. She has anger issues. Thus, she fought with Vannessa and had a meltdown in doctor Procter’s office. For more exciting news updates, stay tuned to TV Season & Spoilers.