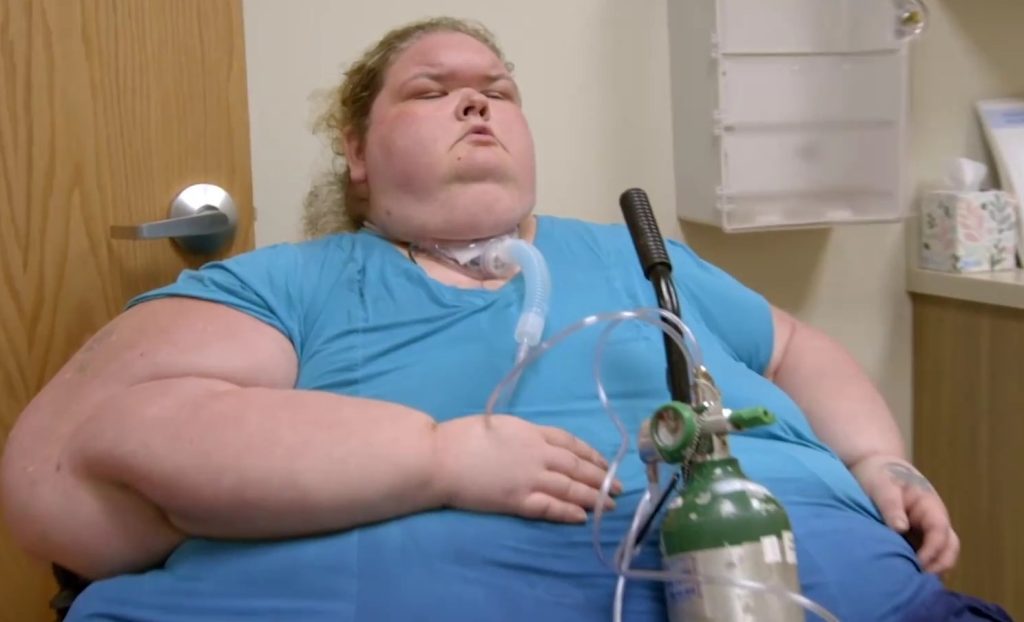 The Slaton Sisters are back on the screen. Fans of 1000 Lb Sisters view the premiere of the show on January 17. However, given how Season 3 ended and the information that has been revealed on social media and in the media, viewers were already aware of the medical emergency that the new Season would start with. At the end of Season 3, we all saw how Tammy was rushed to the hospital after she almost stopped breathing. But she survived, and fans were a relief. However, at the end of Season 4 Episode 1, fans witnessed a shocking revealtion. Tammy Slaton almost experienced a nearly to experience twice in the Season 4 Premiere. Keep reading to find out what happened in the new season premiere.

Fans know that Tammy did decide to go to rehab. She even underwent treatment there. But she stayed there for hardly any time before experiencing a medical emergency and needing to be taken to the hospital. The 1000 Lb Sisters star was septic and almost stopped breathing. However, doctors immediately placed her on life support, and she eventually had a trach. Her family was totally unsure if she would ever open her eyes again. But fortunately, she did. Her brothers told the cameras that this was probably her third or fourth attempt to escape death. However, at the end of the Season 2 premiere, the nurse’s station of the rehabilitation center received a medical emergency alert from Tammy’s room.

Tammy remembers feeling terrified since there was nothing she could do to alert others that she wasn’t getting any oxygen, and it seemed like everything was going in slow motion. Finally, the medical staff at the rehabilitation center understood that Tammy’s trach got clogged. And it was blocking her body from receiving any oxygen. However, the doctors were able to suck all the mucus out from the trach tube and saved her life. However, she was laughing and trying to make light of the situation. But at the time, it was scary for her. She believed she was going to pass away. Even though Tammy Slaton agreed that it was “gross,” she still wanted to describe what happened. The 1000 Lb Sisters star says that if her mucus thickens too much, it might block her trach. She said in a joke that she had a giant booger trapped in her throat and was unable to breathe.

In the upcoming episodes of the 1000 Lb Sisters, viewers will see some significant changes in Tammy’s life. The star of the TLC show has struggled with her weight as a result of a lifetime of unhealthy habits. She attempted to focus the first three seasons of the show on her seeking approval for gastric bypass surgery. However, she kept relapsing. However, Tammy is now trying to make better choices for her family and for herself. Earlier she used to stand against all the decisions her family used to make for her own benefit. However, she was shown adjusting to a new shift in the most recent Season 4 trailer. It even gave her a sense of fresh independence.

Tammy constantly uses a wheelchair to move around since she is fat. Well, for a very long time, she had been using a manual one. Her family then advised her to use an electric wheelchair as it would be convenient. But she disapproved of their proposal by refusing to use the electric wheelchair. However, in the recent promo, she was seen enjoying herself in her new electric chair. It appears as if she is liking the new change. From the clip TLC dropped on their official Instagram page, fans can see Tammy having fun and roaming around her new automatic electric wheelchair while commenting, “I figured it out”. While enjoying herself, she compared moving on the wheelchair to “riding a bull” and added that you just gotta lean with it. Stay tuned to TV Season & Spoilers for more exciting news updates.