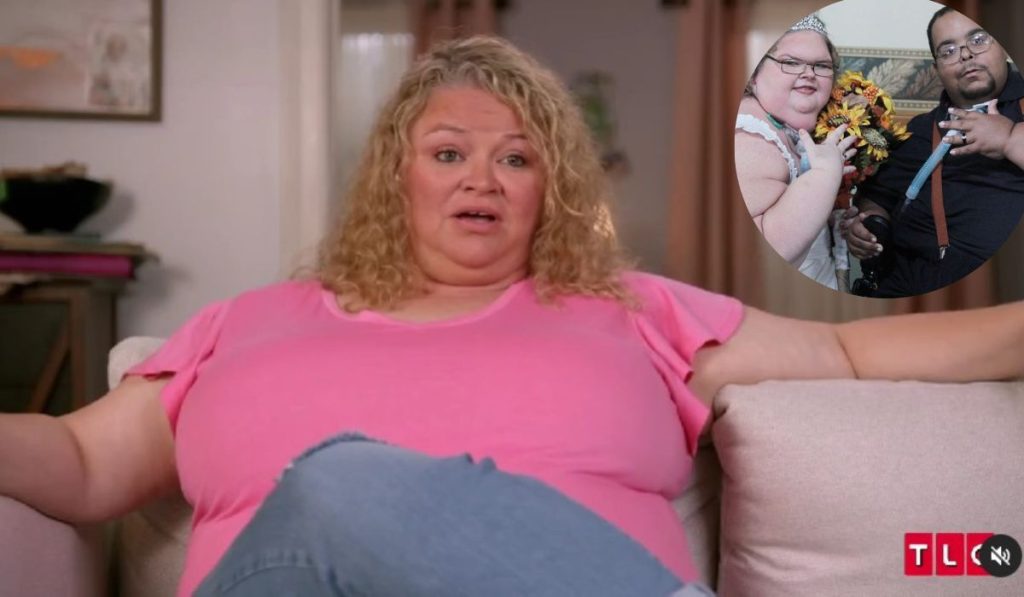 We all know the famous reality TV star Tammy Slaton just got married at her rehab center and changed her name to “Tammy Willingham”. In a few weeks, when 1000 Lb Sisters will be telecast on screen, viewers will get to see her falling in love with her now husband, Caleb Willingham, and finally getting married. The TLC star’s life saw a number of big changes in 2022, and she is eager to share her experience with viewers. Many people are happy that Tammy has met the right person to start a family with. But not all of her family members seem to be satisfied. According to recent teasers, Tammy’s cousin sister Amanda found it difficult to welcome Caleb Willingham into the family. Let’s see the reason that stands behind her concern.

1000 Lb Sisters: Will Amanda Accept Caleb Into Their Family?

In the recently released teaser, viewers saw how Tammy had stopped breathing and was rushed to the hospital. Family members were seen as worried about her condition. However, doctors got the situation, and she was back to normal. Besides her serious health condition, the latest season of 1000 Lb Sisters also features her romantic life. In the video, Tammy shares the news about her new boyfriend, Caleb, with her siblings. Tammy Slaton, on the other hand, hasn’t exactly had the ideal record with her love connections. And hence her siblings are deeply concerned about the circumstance, as seen in the most recent teaser.

In the teaser, Amy Halterman worries that Tammy is reverting to her past. Her earlier relationships with Phillip Redmond and Jerry Sykes ended in previous seasons, which viewers witnessed. And Tammy goes to her vices when she is unhappy in a relationship. On the other hand, Tammy’s cousin sister, Amanda, claims she is unsure of Caleb’s motives, but it is obvious that Tammy has fallen for him. However, the teaser clarifies that Amanda will have difficulty accepting Caleb Willingham in her family this season. She thinks Tammy would be happier if she took it easy while getting better in treatment. However, fans of 1000 Lb Sisters eagerly wait for the season to be telecast as they want to witness Tammy’s romantic journey.

1000 Lb Sisters: Is Tammy Happy With Her Husband?

Tammy Slaton had a difficult beginning to 1000 Lb Sisters. On the other hand, Amy, her younger sister, continued to make excellent growth. In fact, the former relapsed and gained 50 pounds throughout the previous three seasons. However, last year was a turning point for good. This results from Tammy’s decision to commit to her weight reduction and attend treatment genuinely. She also discovered love there in the facilitation center. The TLC star started dating Caleb Willingham, who was also a patient just like her. When their relationship became more serious, they got engaged in October. Later, Tammy and Caleb exchanged vows in the same facility where they had their wedding.

Tammy recently uploaded a video of her spouse in the treatment facility. He was sitting down and casually going through his phone. He gave her a kind grin as she focused her camera on him. The followers of the 1000 Lb Sisters were delighted to see the Slaton sister flaunting her spouse. She had a history of dating nasty boys who put her through a lot of hardship. She, therefore, appeared to be cheerful in comparison to her husband. When they have achieved their weight loss goal, Tammy and Caleb, who are still at the rehab facility, are planning to settle at Tammy’s apartment. Fans still don’t know much about them despite the marriage. They are also awaiting their love story in the future season addition to this. Stay tuned to TV Season & Spoilers