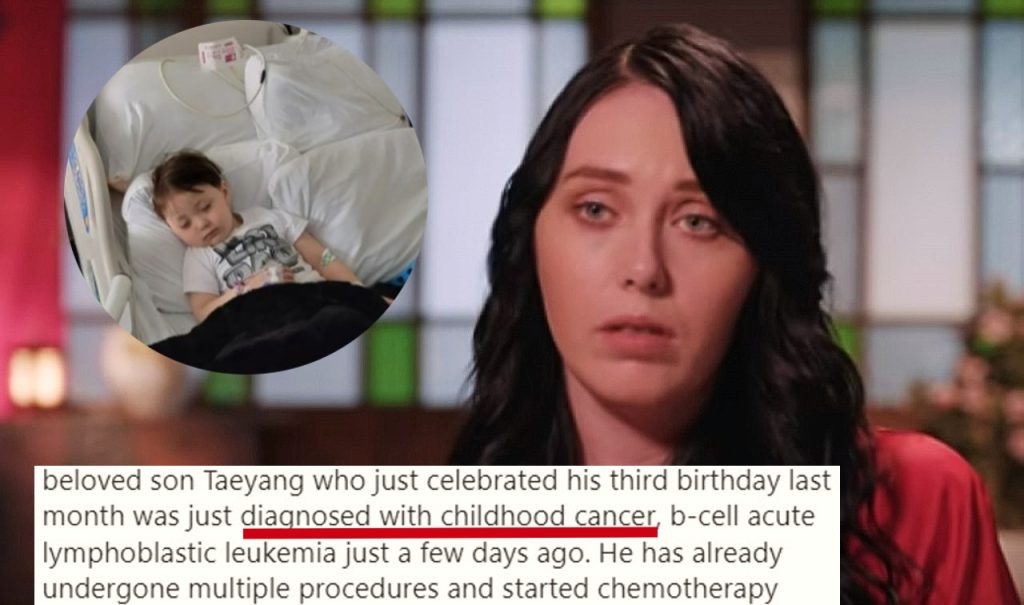 It seems like problems don’t seem to end for 90 Day Fiance, Deavan Clegg. Earlier, she took to her social media to reveal being officially divorced from Jihoon Lee. However, the woman used the platform again to share something rather devastating. It turns out that her 3-year-old son, Taeyang, hasn’t been keeping well. Unfortunately, the family recently found out about his cancer diagnosis. Keep reading to find out more details about this.

Deavan Clegg became famous, appearing alongside Jihoon Lee in 90 Day Fiance: The Other Way. Although they aren’t together anymore, they had to walk down the path of parenthood. That’s because they ended up conceiving and having their Taeyang. Now Deavan and Jihoon are divorced, and the young mother has full custody of her son. However, her troubles haven’t come to an end. That’s because the star took to her Instagram to share some unfortunate news. It turns out that her 3-year-old has been diagnosed with “b-cell acute lymphoblastic leukemia,” i.e., childhood cancer.

At the beginning of her post, Deavan talked of being absolutely real and honest with her followers. That’s when she talked of being at the most “vulnerable” and “saddest” point in her life. While talking more about her son’s cancer, she expressed he has undergone multiple “procedures” and started seeking chemotherapy a few days ago. Therefore, the 90 Day Fiance star also requested her well-wishers to do the needful by helping them out with the medical bills. Hence, she also began a fundraiser for the same. Later on, popular blogger John Yates also amplified this news by resharing it on his handle.

At last, Deavan assured the fans that there was a great chance of recovery for her son. However, it is going to take five years for that, and before that, he will undergo a long process worth two years. At last, she thanked everyone and asked them to give her time to process this harrowing circumstance.

As Deavan and Jihoon’s relationship was quite troublesome, they couldn’t get along. At last, when their son Taeyang came into this world, his father wasn’t there for the birth. Hence, he got to see it via a video call. Apparently, it was no easy delivery for Deavan as it happened quite early, i.e., after 36 weeks via c-section. In fact, it was two whole weeks before the actual due date. Moreover, the newborn ended up having two holes in his lungs as he was screaming too loudly.

As a result, the little one spent some time in the NICU for five days. Hence, his mother, Deavan, remained sleepless. That’s because she sat next to him in a wheelchair, holding his hand. Therefore, it isn’t the first time the 90 Day Fiance castmate had to undergo challenging times with her son. Despite this, she is trying to stay strong for her family and putting on a brave face. Moreover, she also asked the followers to pray for them.