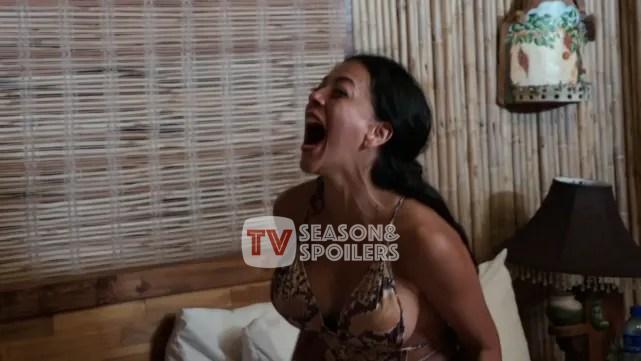 Jasmine Pineda has not been going through a good time in 90 Day Fiance: Before The 90 Days. The woman made her TV debut in the reality show with Gino Palazzolo. However, things have hit the roof between the couple. It happened after the latter leaked her partner’s explicit pictures to his ex. Now the star has given confirmation on getting fired due to the incident. So, what went down? Did she break up with Gino? Keep reading for all the information on this.

Jasmine and Gino became quite popular since their 90 Day Fiance debut. Although their relationship was going through minor lows in the show, something major led to a 180-degree turn. That’s because the American man broke his woman’s trust in the worst possible manner. Apparently, he leaked her inappropriate pictures to his ex. Shockingly, she was topless in some of them. As a result, the ex reached out to the celebrity.

However, the same ex has been creating havoc in Jasmine’s life. That’s because she shared those inappropriate images with bloggers and also the place where the Panama resident was working. Hence, she ended up losing her job. Moreover, she is going through some tough times and crying a lot. That’s because the 90 Day Fiance star feels she is in the “lowest” phase in her life. It turns out she made these revelations through her Instagram story.

Eventually, the TLC star also thanked all the supporters who reached out to her via messages. Yet, she will be going off social media for a while as she wants to be with her close ones, i.e., her sons and mother. In fact, her mother also expressed gratitude towards the ones who reached out to make sure Jasmine was doing okay

The latest 90 Day Fiance: Before The 90 Day episode finally had Jasmine confront her partner for his wrong deeds. Initially, he was not willing to admit to leaking the photos. Eventually, Gino came clear once Jasmine talked of having proof. Long story short, the Panama resident went through a major breakdown and screamed at her lover. Moreover, things got so intense that she even took off his hat while fighting. Although it never happens in the reality show, the producers allegedly had to step up to calm the new celebrity down over the brawl.

Unfortunately, the couple had decided to take a vacation when the entire incident unfolded. Hence, the cast member ended up distancing herself from the infamous man. However, it is still not clear where their relationship stands. Despite this, viewers made the observation of Jasmine, claiming never to “trust” him ever. Yet, the duo has been mum about their relationship status. Hopefully, the upcoming episodes will shed light on this matter. Keep checking TV Season & Spoilers for more such updates.