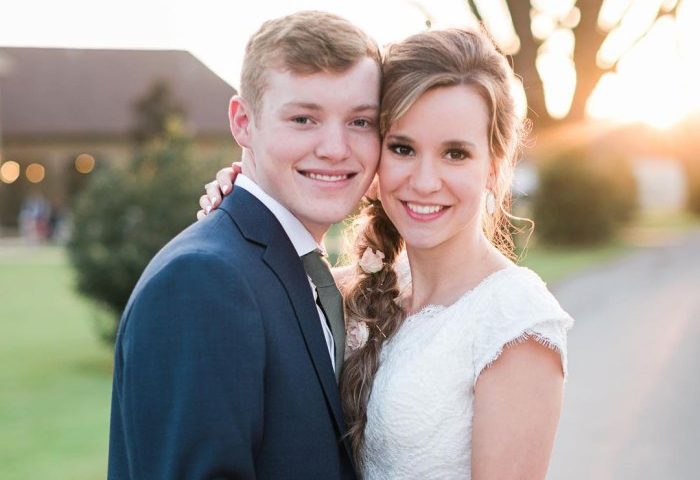 The Duggars are welcoming another member to the family! Claire Spivey has now become Claire Duggar after her wedding with the Counting On star Justin Duggar. The teenage couple announced the news alongside some pictures on their Instagram. Let’s take a look at the details.

The fourteenth child of ’19 Kids And Counting’ fame Jim Bob and Michelle Duggar, Justin has married his best friend. The couple revealed their relationship in a Counting On episode back in September 2020. A while later, the two of them put of Instagram posts announcing their engagement. Surprisingly, within no time, the TV star ended up tying the knot with his 3-month-old fiance in Ft Worth, Texas.

Both Justin and Claire posted their wedding picture on Instagram with the note “2.26.21,” confirming the ceremony’s date. The young TLC star sported a dark blue suit on the big day, while his 19-year-old bride wore a stunning white dress with lace accents. Fans loved Claire’s graceful look, especially her braided hair. A day later, Justin wished his wife on her birthday with another picture from their wedding day. He expressed that he’s thankful to have married his best friend. On the other hand, Spivey has officially changed her Instagram name to Claire ‘Duggar.’

Counting On: Fans & Loved Ones Congratulate The Teenage Couple On Their Marriage

Fans of the TLC show were shocked to see Justin and Claire’s wedding photo. Due to a publically shared wedding registry date, fans assumed that the two of them would tie the knot in April. The young duo took to their social media and clarified that the rumor spread by the said wedding registry is false. They apologized to their fans and assured them that the real registry would be coming soon in their bios. Later on, their followers got to know ab out the marriage as the wedding pictures surfaced.

While many fans pointed out that the couple is too young to get married, others went gaga over their wedding photos. Both Justin and Claire’s social media were flooded with congratulatory messages from fans and loved ones. Claire’s mother, Hillary Spivey, posted the duo’s picture, calling them a darling. Moreover, she also Instagrammed a photo alongside her newly-wedded daughter on her birthday. Many members of the Duggar family and 19 Kids And Counting alums wished the beautiful couple on the occasion. Stay connected for more updates.