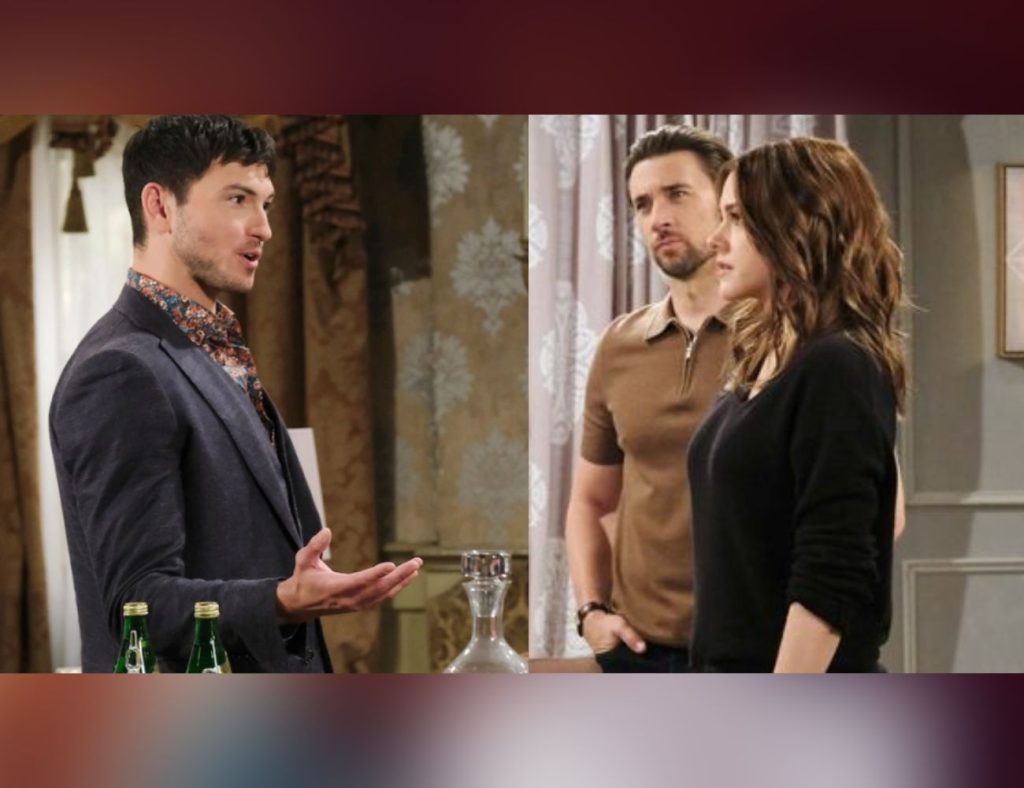 Days of Our Lives: Alex Gets Jealous Of Chad, Accuses Stephanie Of Cheating

Alex Kiriakis and Stephanie Johnson have come a long way romantically from where they had started on Days of Our Lives. While Alex has been swooning over the chances of having a perfect love life with Stephanie in the future, she too has been warming up to him a lot. Meanwhile, Chad had removed himself from the equation, allowing the young love birds to continue their necking and pecking. However, spoilers suggest that their love story will hit a speed breaker when Alex starts to suspect Stephanie of getting close to Chad.

It’s true that Chad DiMera has stepped out of Stephanie’s romantic circle on Days of Our Lives. However, that hasn’t killed his feelings for her. Chad is still pining for Stephanie, just not in so many words. Unbeknownst to Chad’s true feelings, Stephanie has opened her heart to accept Alex’s love for her. Alex too has come a long way from his hooking up ways, and is dreaming to have a stable love life with Stephanie. He completely believes that Stephanie is the woman of his dreams and that he wants to spend the rest of his life with her.

Thus, even without verbally committing to each other, Alex internally has committed to Stephanie. Even for Stephanie, Alex feels as if it is an unsaid promise that she is all in with him on Days of Our Lives. However, spoilers suggest that their love boat is heading toward choppy waters in the upcoming episodes. Despite the fact that Chad has accepted Stephanie and Alex’s relationship and is only around Stephanie in the capacity of a friend, Alex might misinterpret it. He will start picking on things that may or may not be true and start to feel like Stephanie and Chad still have a connection. In the future episodes Alex’s insecurity and Jealousy will start becoming visible and he might even explode in rage!

Alex Gets Jealous Of Chad And Stephanie’s Friendship, Accuses Stephanie On Days Of Our Lives

Technically speaking, Alex and Stephanie haven’t formalized their relationship on Days of Our Lives. While it’s true that they are together in the sense that they are seeing each other and warming up, but they haven’t really verbally committed to each other. However, Alex has a different picture in mind. He has been hung up on Stephanie for such a long time that now when it’s finally happening, he is rushing towards the finish line like nobody’s business! But Stephanie is not up to his speed yet and is inching slower.

So, when Alex sees her still hanging around Chad, he will get extremely jealous. While Stephanie will insist that she and Chad are friends. Spoilers suggest that Alex’s insecurity will rile him up to the point that he will start believing that Stephanie is cheating on him. He may read into things that aren’t even there and jump to the conclusion that Stephanie is sleeping with Chad. Which, in all likelihood, won’t be true at all. So when Alex loses his cool an overreact to the situation, Stephanie may try to calm him by reassuring him that she truly is interested in being with him and not Chad. However, whether Alex believes it or not is yet to be seen. Meanwhile, Chad might start to feel that is blowing up his chances with Stephanie and seek advice from Sonny.

It will be interesting to watch where this equation between Stephanie, Alex, and Chad heads from this point. Will Stephanie and Alex be able to maintain a stable relationship? Or will his insecurities drive Stephanie away from him and closer to Chad? Stay tuned to Days of Our Lives to find the answers. Now streaming exclusively on Peacock.