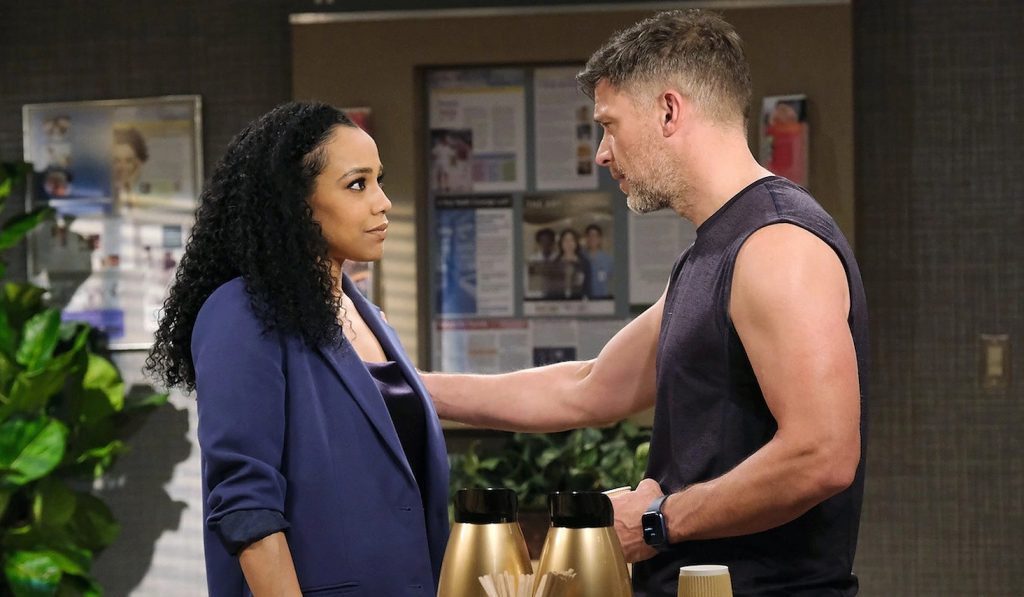 Days Of Our Lives spoilers for August 25, 2022, reveal that Melinda will have some shocking updates for Gwen and Leo in the upcoming episode of the soap opera. Then, Across the town, Eric and Jada will have an intimate moment. However, it won’t be long till Nicole comes and discovers it.

Over with Sonny, he will worry about his brother, Alex. Days of Our Lives spoilers say that this new family arc is going to get interesting. In the meantime, Stephanie will have a chat with Chad. Read the entire article to know what unfolds in today’s episode.

While Gwen and Leo are waiting to find what their fate has in store, Melinda will put them at ease (not really). She will have some stunning announcements to make regarding the two of them. Fans are well aware that Abigail’s murder is still a mystery. Melinda might lift some dirt off the case by putting forth the wrong developments.

Days of Our Lives spoilers already teased that Leo will get bail. However, that might happen in the week of August 29- September 2, 2022. As of now, we do not know what exact updates Melinda has, but, whatever it is, Gwen and Leo’s friendship will click back again by the end of the week.

Days Of Our Lives Spoilers: Sonny Worried For His Brother

Next, not having an idea of Alex’s fate, Sonny will worry about his brother. Days Of Our Lives spoilers say that Sonny will ask Alex to stop being a playboy. He will want him to focus on a single woman. However, both the bro thers don’t know who Alex is going to bump into.

Well, the storyline is slowly taking the viewers to Alex and Stephanie bumping seen. With that, Alex’s life will turn upside down for good. In the coming week, this playboy will turn into a passionate lover boy. Ultimately fulfilling Sonny’s wish.

Speaking of Stephanie, she might have a chat with Chad. They both will reminisce about the good old memories together. As for Chad, he will appreciate Steph’s company. This might ultimately help him to move on with his agony a little bit.

Further on Days Of Our Lives, Eric and Nicole will have some dreams about each other. DOOL writers might want to hint that they are rather soulmates. If not now, possibilities are there that they might get back together in the future. For now, things are going to get messy there.

Whatever it is, Eric will later have a steamy moment with Jada. After that, Nicole might come looking for Eric. Nicole will get upset on discovering a half-naked Jada opening Eric’s door. Instead of leaving the place, Nicole might ask her if they slept together. A simple answer of Yes will upset Nicole to a great extent. Looks like Nicole is still not over her ex-husband. This sole reason is enough to damage her marriage with Rafe. Stay tuned and watch Days Of Our Lives, it airs every weekday on NBC. For more information on updates and spoilers, visit our website, TV Season & Spoilers.