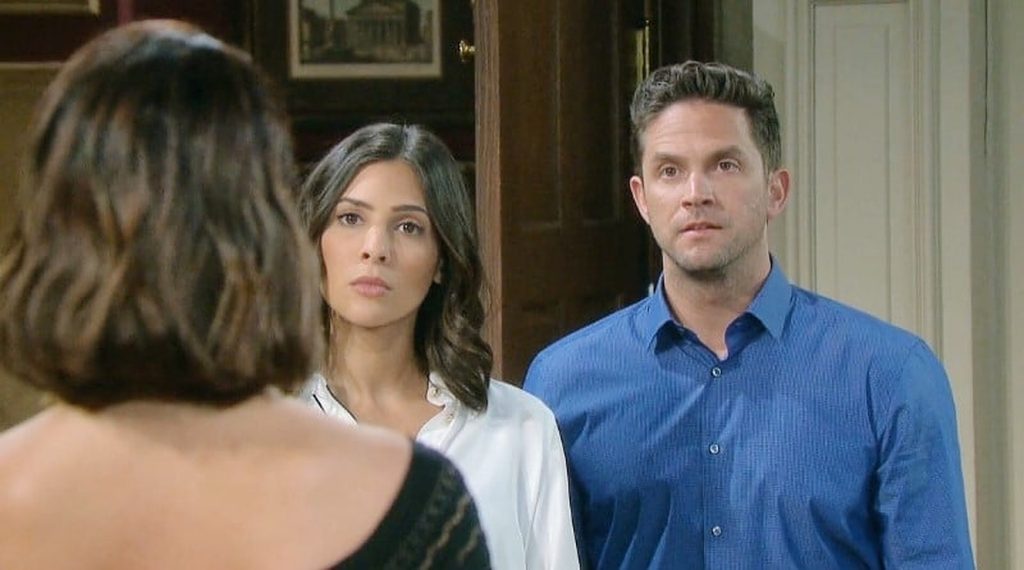 There was already a lot of chaos between Stefan and Gabi; now, she will add more to it. Days Of Our Lives spoilers tease that Gabi will send her wedding invitation to Stefan and Chloe. This will stir more chaos and leave Stefan feeling really upset and jealous. Will this invitation arise more chaos among these two couples? Let’s see what might happen next with Stefan’s programmed brain.

Gabi Decides To Move On, Sends Her Wedding Invitation To Stefan-Chloe

Fans know how Gabi tried to remind Stefan of their relationship. Days of Our Lives showed how disgusted Stefan was with Gabi. After Rolf programmed him, he only remembers the time he spent with Chloe and is relentlessly trying to get back with her. Every time Gabi noticed Stefan with Chloe, it just made her extremely upset and also angry but there was nothing that she could do.

Recently, Gabi and Stefan again had some problems with Gabi Chick. Gabi wants to have full control over that, but Stefan is not ready to let that happen. Above that, Gabi also came to know that Stefan and Chloe are planning to make their relationship public. Well, that was enough for Gabi to make a major decision. She was so done with chasing Stefan and finally decided to move on with Li. As for Stefan, even if he faces some memory flashes of Gabi, he pushes it over and focuses on Chloe. But till when? There has to be something that will make Stefan feel what he is doing.

This is where Stefan and Chloe will receive another shocker. Days Of Our Lives spoilers say Gabi will send her wedding invitation to both of them. How will Stefan react to it? Looks like this wedding invitation is soon going to create a lot of chaos among these two couples. Let’s see what will happen next.

First, Stefan and Chloe will receive it. Stefan, who already is hiding his memory flashes, will be taken aback. Fans might remember that Stefan does feel a bit excited in Gabi’s presence, but he doesn’t know why it happens. However, even though Stefan and Chloe are shocked, Stefan will be a bit jealous and will also be upset. No matter what he feels, Stefan won’t show it on his face. Looks like this wedding invitation will trigger Stefan’s memories a bit and might leave him in pain.

Later, Li will also learn about the invitation sent to Stefan and Chloe. The last person Li wants to see at his wedding is Stefan. So, he won’t understand the need to call him at the wedding. Days Of Our Lives spoilers say Li will try to convince Gabi to take that invitation back. If not, then Li might directly ask Stefan not to come to the wedding.

Li has fallen hard for Gabi, so he won’t want Stefan to come and ruin their special day. Even though Stefan’s brain is well programmed, Li will fret over his future. Moreover, chances are there that Gabi’s invitation might set the stage for more chaos since Stefan might start realizing his true feelings. Whatever the case, Li and Gabi’s wedding won’t happen that easily. So, stay tuned to see how the storyline pans out. Days Of Our Lives airs on Peacock+ in the US and on the W Network in Canada. For more updates and spoilers, visit our website, TV Season & Spoilers.