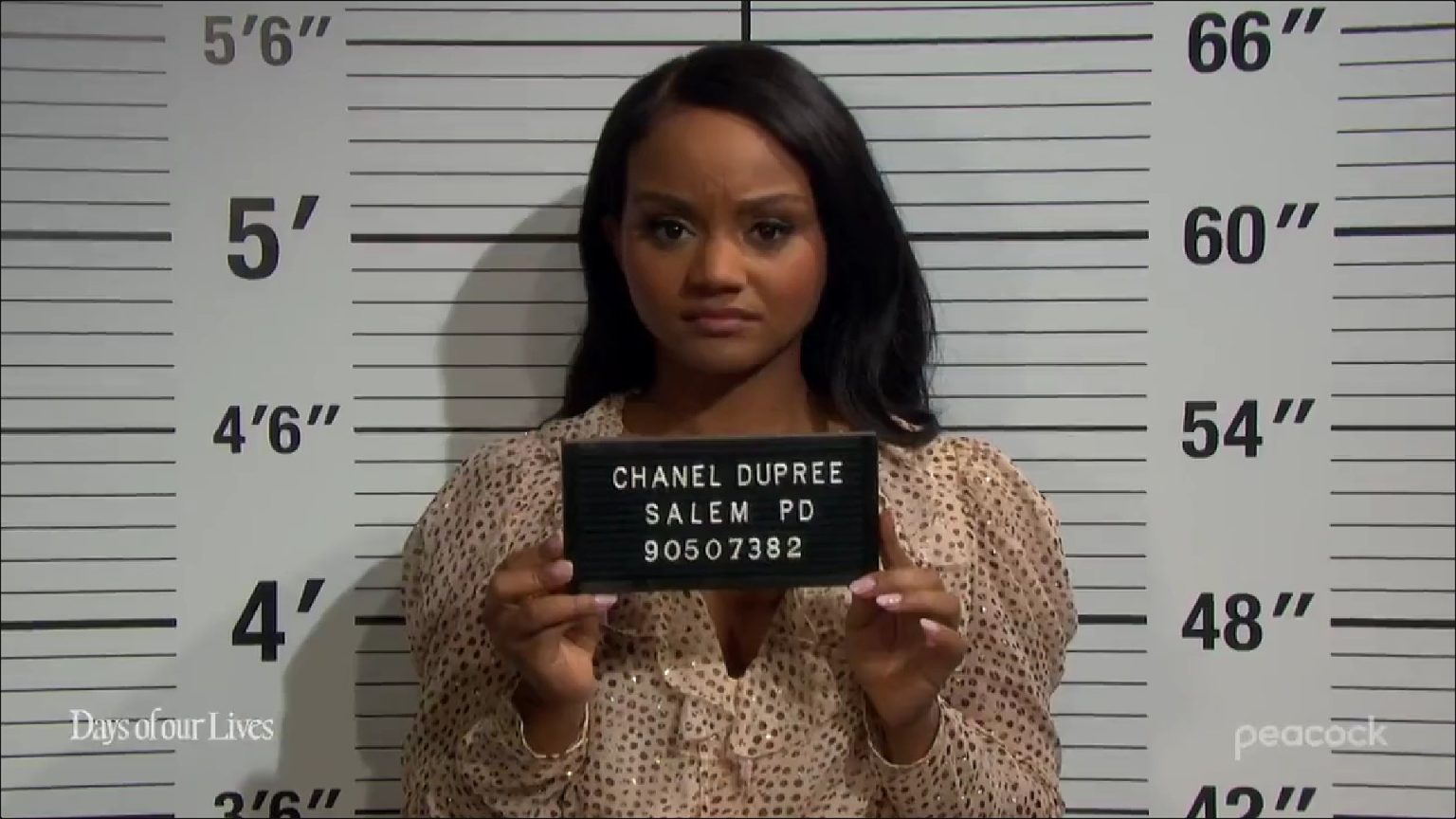 DOOL/Chanel (Raven Bowens) gets arrested
Days of Our Lives Spoilers

Days Of Our Lives Spoilers For The Next Two Weeks (November 7-18, 2022): EJ Kidnaps Tripp? Chanel Is In A Pickle

Days Of Our Lives spoilers for the next two weeks, starting November 7, 2022, tease that EJ will kidnap Tripp to take revenge on Ava. However, things will get messier when Orpheus will interfere in this. Over with Xander, he will deal with a guilty conscience when Susan will beg him to let her go. Given how short-tempered EJ is, Ava is likely to face trouble. EJ will kidnap Tripp in order to make Ava feel the same pain. So, will Ava decide to free Susan?

During the week of November 14-18, 2022, Jada will be hospitalized after she fainted. Looks like the doctors will run some tests on her, including a pregnancy test. Elsewhere, Xander will confide in Gwen and confess his recent sins. How will Sarah react to it when she learns about the kidnapping? Keep reading to know what is brewing in Salem in the coming two weeks.

Days Of Our Lives Spoilers For The Week Of November 7-11, 2022: Xander Battles Guilt

First, after kidnapping Susan, Xander will wear a clown mask to hide his identity. Days of Our Lives spoilers tease that Xander will battle guilt when Susan will beg to free her. EJ will soon receive a ransom call and will be furious. He will know that Ava is the one behind all this. So, it is obvious that he is not going to spare her in any condition.

Other Days of Our Lives spoilers tease that EJ will now go after Tripp and will kidnap him. Just like how he was worried to death about his beloved mother, EJ will now what Ava to feel the same pain. Whatever the case, Susan will ultimately be rescued, but there is no guarantee about Tripp. Looks like Orpheus will make things more complicated as he takes over and tries to interfere in all Tripp-kidnapping drama.

Elsewhere, Chloe will pull back from Stefan’s kiss. Even though Stefan wants Chloe to move on from Brady, it is just said easier than done. For her she won’t be able to move on that easily. So, she will ask Stefan for some time. Chloe is sandwiched between two difficult situations. On one side, she is heartbroken with Brady’s breakup, on the other hand, Stefan had some brainwashing treatment. So she won’t know where to go.

On Election Day, Paulina and Abe will celebrate their big win. But that celebration won’t sustain longer since Shawn will land with handcuffs in hand. Days Of Our Lives spoilers reveal Shawn will be there to arrest Chanel for a murder case. Looks like Sloan will make the incriminating evidence public making Chanel land in prison.

As for Paulina, she will insist that she never wanted Abe to worry about anything, so that is why she kept Chanel’s past a secret. Shawn will call out Julie as well, so it looks like she has also done something. Speaking of Sloan, she will rip off at Alex for betraying her

. Also, Sloan will let know Alex know that their hook-up session plan is canceled. However, Alex won’t be bothered since he is happy that Stephanie is giving him a chance.

Next, Leo will be very disturbed after Paulina fires him. So, he will confide in Sonny and rant about his problems. As shown in the preview clips, Alex will come to interrupt them at this point to take Stephanie with him for dinner. Sonny will be shocked to know that Stephanie was the one who actually asked Alex out. Whatever it is, Stephanie and Alex are to come closer to each other in the coming weeks. How will Chad react to this? We will know that soon.

Days Of Our Lives Spoilers: Is Jada Pregnant?

During the week of November 7-11, 2022, Jada will witness Nicole and Eric’s steamy kiss. So, she will be extremely pissed off and will approach Rafe immediately. Days Of Our Lives spoilers say that before Jada could say anything, she will faint in Rafe’s arms.

Nicole and Eric’s sweet moment will be interrupted by Rafe’s call, who will inform him about Jada. Looks like Jada will be hospitalized, and the doctors will run a few tests on her. One of which will be a pregnancy test. Is Jada carrying Eric’s child? We will know that soon. As for Nicole, she will also make a huge mistake soon.

Days Of Our Lives Spoilers For The Week Of November 14-18, 2022: Xander’s Confession To Gwen

During next week, Xander will confide in Gwen when he won’t know what to do. He will come clean about all his recent crimes. The kidnapping, ransom call, obeying Ava for money, and rest. Well, this just shows who can make Xander more comfortable. He will also share that he is terrified of what could happen when Sarah comes to know about the crimes. So, Gwen might provide him with some advice.

At the hospital, Jada is likely to get some shocking updates that will rock her life. Chances are there that she might be pregnant with Eric’s child. What will Eric do if that’s the case? To talk of Nicole, she is also going to make a major decision that will only put her in further trouble. Chances are there that Nicole might want to get back with Eric, and for that, she may also come clean about her feelings for Rafe. But if Jada is really pregnant, Eric and Nicole’s ship will soon sink.

Finally, Sloan will reveal something shocking about Paulina. Looks like she might be disclosing her client’s identity. First of all, if Sloan even has a client or not is a big question in itself. So, it won’t be a surprise if Sloan was the person who scored the dirt and doesn’t actually have any clients. Stay tuned as DOOL is going to air more action-packed episodes in the upcoming weeks. Days Of Our Lives airs every weekday on Peacock+ in the US and on the W Network in Canada. For more updates and spoilers, visit our website, TV Season & Spoilers.