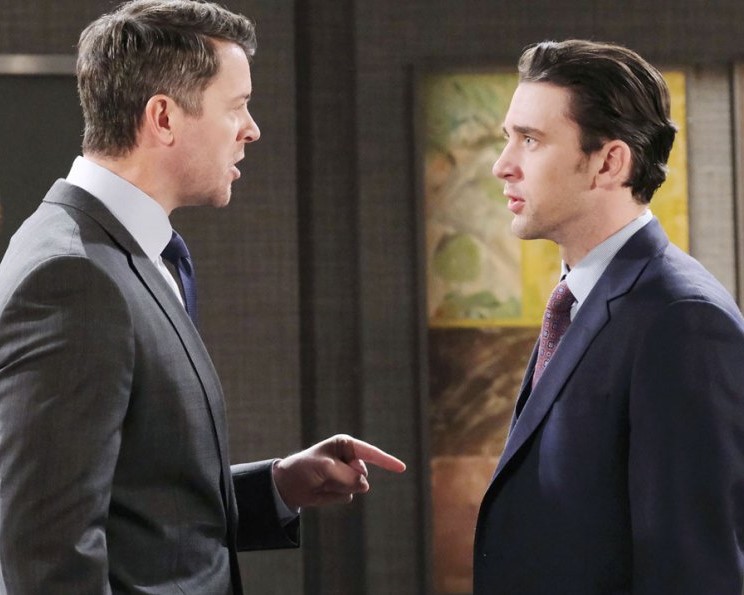 Days of Our Lives spoilers suggest that Chad and Abby will hit a roadblock once again in the upcoming days. They were recently reunited, and now, they are enjoying this reunion. In fact, they are all set to spend some romantic moments together in Johnny DiMera’s movie. They have been cast there. Abigail is all set to bring Marlena to life, and Chad is playing the character of John.

But, the latest spoilers suggest that Johnny will make some last-minute casting changes, and that might change things for them. As the spoilers have it, Chad will be replaced, and then Abby will have to perform all those love scenes with someone else. What will all happen? Keep reading to find out.

Chad And Abby Are Preparing For Their Scenes Together

Days of Our Lives spoilers for the week of October 11, 2021, reveal that Chad will make a deal with Johnny DiMera. Chad will promise Johnny an investment in the movie if he casts him as John opposite Abigail in his possession movie. From what the spoilers suggest, this deal will go through, and Chad will bag the role he wants.

Abigail will play Marlena, and Chad will play the role of John Black. In fact, the spoilers suggest that in the upcoming week of October 11, these two love birds will even rehearse their scenes together. This will also include a love scene. However, things won’t be all that happy for very long. Spoilers suggest that Chad and Abby will have some troubles coming up soon.

Days of Our Lives: Chad Is Blindsided

Days of Our Lives spoilers suggest that Chad will get blindsided in the upcoming week of October 11. Right now, Chad dreams of being in love scenes with Abigail, but soon his brother will sabotage him. DOOL spoilers suggest that EJ might end up with John’s part, and he might film all those love scenes with Abigail. Chad had made a deal with Abigail, but  Celebratingthesoaps.com suggests that EJ will go behind Chad’s back and make a better offer. He will convince Johnny into casting him as John.

As the speculations have it, Chad and Abigail won’t know about this change until the camera starts rolling. If this happens, it looks like all of this will just be a revisitation of EJ and Abigail’s affair. This might be a way for EJ to serve his revenge. Fans know that EJ does not lets go of anyone who crosses him. So, since Chad went behind his back and participated in Johnny’s venture, EJ might think of it as betrayal and want revenge.

How Will Abigail React?

If EJ does comes to enact all the love scenes with Abigail on the soap, the big question is, how will Abigail react? Days of Our Lives spoilers suggest that Abigail is still in a lot of heartaches because of what Chad did. After all, Chad slept with her sister Gwen. So, all these thoughts and emotions might come running into her mind, and she might decide to go ahead with kissing EJ.

She might think of this as payback. But, this will affect her and Chad’s relationship very badly. They are only getting back on track. So, if Abigail does anything like this, it might sabotage their plan.

Days Of Our Lives: Chad And Abby’s Relationship Is In Danger

Days of Our Lives spoilers tease that Chad and Abigail will have a breakthrough in their marriage in the upcoming days. This will be a positive thing. But, if Abigail does go ahead with love scenes with EJ, that might affect their relationship big time. There is some speculation that there is a possibility that the Devil might make Abigail do all of this.

Whatever the case might be, some issues will come up for Chad and Abigail soon. How will they deal with it? We will have to wait to see. Tvseasonspoilers.com will keep you updated with all the news about the soap as it surfaces. So, stay tuned. Days of Our Lives airs on NBC all weekdays. So, be sure to tune in and enjoy.