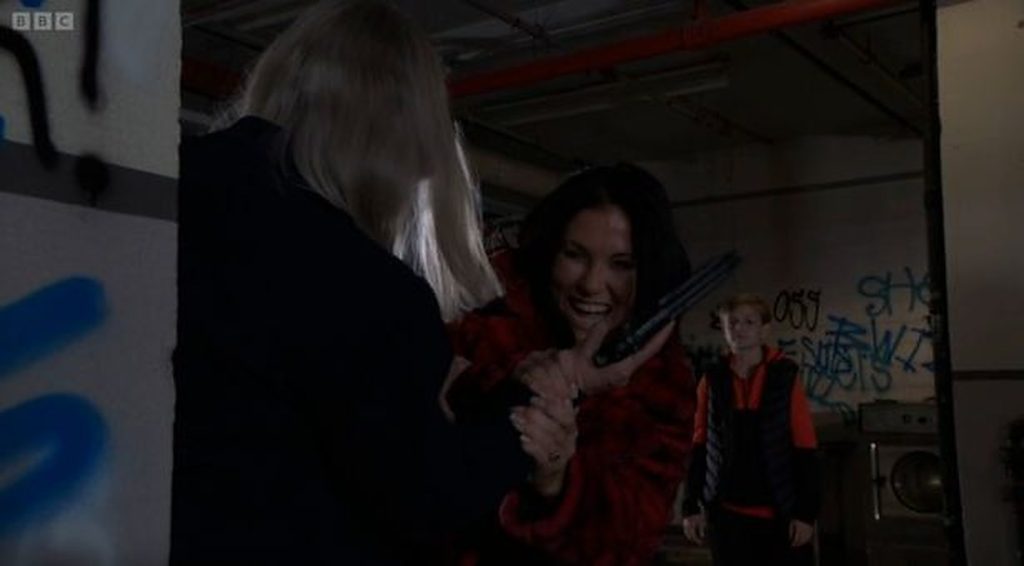 EastEnders Spoilers: Kebble-Kat Gun Struggle, [THIS] Is Who Gets SHOT!

January 4, 2023, episode of EastEnders left viewers on the edge of their seats with a big cliffhanger. In this episode, a gunshot is fired, and we are left asking who was on the receiving end of it. EastEnders viewers who have seen the show know that a tense between Kat and Keeble where they were scuffling over the gun. Then, it went off, and the episode ended. Who got shot? Keep reading to find out.

In the previous episode of EastEnders, Keeble had blood on her mind as she decided to go to extreme lengths to rip Phil and his whole family apart. Earlier this week, she kidnapped Kat and Tommy. She started threatening them at gunpoint. However, what she did not know was what she was going to do when Phil came back. Things got even tenser when Phil did not come there at the right time.

Kat tried to talk Keeble out of doing what she was doing, but it clearly did not work. Everything was amped up when the corrupt got into Kat’s face with the gun. Then, Slater had no choice but to fight for the gun. This struggle became even more intense when both women were fighting for the gun. Whoever would get the gun would get the upper hand. By the end of this very interesting episode, these women were still fighting for the gun, and the shot fired. Now, what we are wondering is who got shot.

It seems like it’s not just us, but fans are wondering about this too. Many EastEnders fans have taken onto their social media to share who they think has been shot, and it looks like most believe that it is Keeble. Some fans believe that it is time that the corrupt cop pays for her deeds others have been pointing out facts.

One fan reminded everyone that the actress who plays the character is leaving the show, and this seems like the way to let her go. However, there are some fans who believe that maybe, Tommy got shot. Who really is it is yet to be seen. Who do you think got shot here? Tell us in the comments below. EastEnders airs on BBC, Monday through Thursday at 7:30 PM. So, make sure you tune in to find out what exactly is happening.