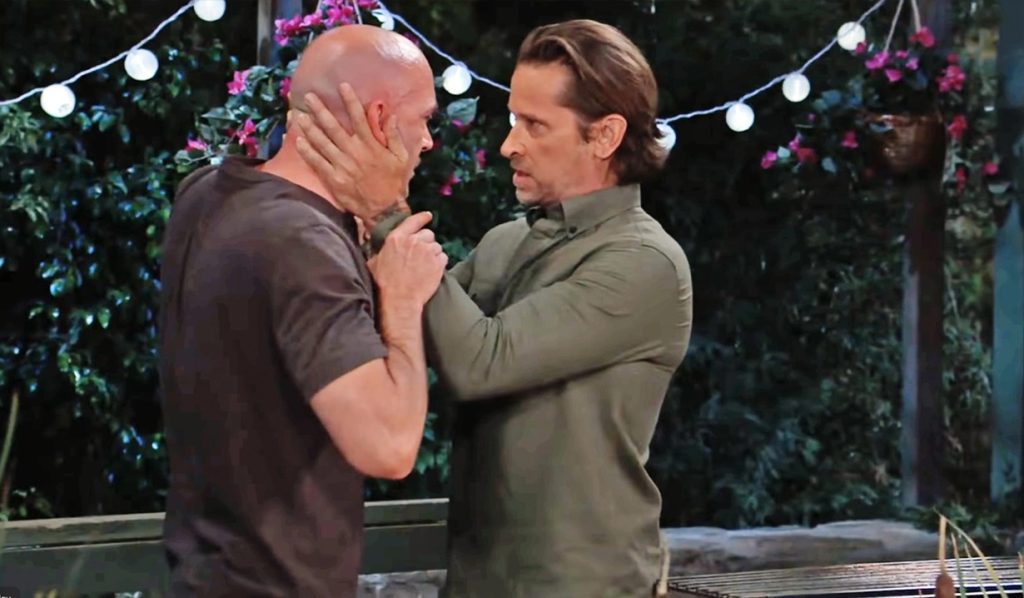 General Hospital recap for Friday, August 26, 2022, revealed the story of Elizabeth and Hamilton Finn. He confessed to calling Sarah because he was worried about Liz. She was angry and told Hamilton he was not her doctor to make such decisions. Later, Elizabeth had another dramatic flashback. Spencer confronted Nikolas about Esme and disowned him after learning the truth about Esme.

Mason met Maxie for the first time and talked to her. Austin was upset and asked Mason to stay away from her. Mason got angry and told Austin he was the only one giving orders at knifepoint. Ava overheard their conversation and Mason caught her. He tried to chase her and later, we saw someone stab Ava. Meanwhile, Valentin teased Victor and Lucy when they flirted with each other. Terry and Yuri sat by the pool and spent some quality time together.

In this episode of General Hospital, Elizabeth asked Hamilton to answer the call from Sarah. Finn confessed he spoke to Sarah because he could not ignore Elizabeth’s pain. Liz insisted this was her burden and not Hamilton Finn’s. He caught on to her admission of burden. Despite his concern, Liz insisted Finn was not her doctor and did not need to indulge in her issues.

Later, Elizabeth had a flashback from her past. She saw herself on the stairs, holding a woman by her arms. The young Liz warned the woman of her father. However, eventually, Liz realized she had skipped time and now had a bloody wound on her head.

Previously, we saw Spencer overhear a conversation between Ava and Nikolas. In that conversation, Nikolas talked about sleeping with Esme, which made Spencer furious. Ava was not sure if Spencer heard it so she thought it was important to confirm it. Spencer could not believe what he heard and asked Nikolas if it was true. Spencer’s whole world came down.

Lately, Spencer was not feeling too good. He would be arrested again and Trina was dating Rory. And now this? His father slept with his girlfriend Esme? Spencer screamed at Nikolas because he had had enough of his lies. He decided he was done with his father for good.

General Hospital: Mason & Austin Get Into A Fight, Ava Gets Stabbed

In the meantime, Mac Scorpio learned about Cody’s biological link with Felicia Scorpio and Lucy Coe. Anna heard about the same as well before they started talking about Lucy. Later, Anna asked Lucy to do everything she could and keep an eye on Valentin Cassadine and Victor Cassadine.

Mason met Maxie for the first time at the picnic. Austin was upset and took Mason aside for a private conversation. The cousins had a heated quarrel. Austin remarked that the debt had been paid, but Mason did not agree with him. Later, Austin grabbed Mason’s head and warned him to steer clear of Maxie. Mason grabbed his knife and pointed it at Austin’s throat. Of course, Mason was angry because only he could give orders.

Ava overheard Mason and Austin’s face-off by the grill. She tried to leave, and Austin pretended it was just a family quarrel. However, Mason was paranoid and ran after her. Later, we saw some in the boat house grabbing gloves and a hook. The person came behind Ava and stabbed her in the abdomen! Spoilers indicate this could be worrisome for Ava.

Speaking of Valentin, Anna realized he was involved in a corn game. She threw a few bags at him for lying to her, but Maxie arrived and brought her back to the real world. Lucy interrupted Valentin and Victor’s conversation. This also allowed her to flirt with Victor and ask him to open a jar for her.

Meanwhile, Valentin mentioned Martin on this episode of General Hospital. He clicked a picture of Lucy and Victor and joked about sharing it with Martin. Lucy insisted he did not need to do that. Victor asked Valentin to delete the photo. Valentine remarked that Victor always tried to get what he did not have. Victor countered that by suggesting he was patient with what he wanted.

Meanwhile, at the stables, Cody got to Britt’s nerves with his questions about Cesar Faison and Peter August. They were interrupted by Mac and Felicia. Their introductions were quite awkward, Mac admitted he was friends with Dominque Stanton. Mac was fixated on Cody for the entire meeting. Later on, Cody mentioned to Britt how Mac was weird. He tried to ask her about her family but Britt declined that conversation.

At the Metro Court, Terry and Yuri sat by the pool and spent some time together. He complimented her necklace and asked if someone important gave it to her. She confessed her mother had given her the necklace. Furthermore, there was no one special in her life at the moment.

Terry told her that the crystal stood for change. However, while explaining, Yuri dropped the necklace into the pool by mistake. Later, He jumped inside with his clothes on and found the necklace. Once he was out, he put the necklace around her neck. General Hospital airs weekdays on ABC. Stay tuned with TV Season & Spoilers for the latest news and updates from the show.