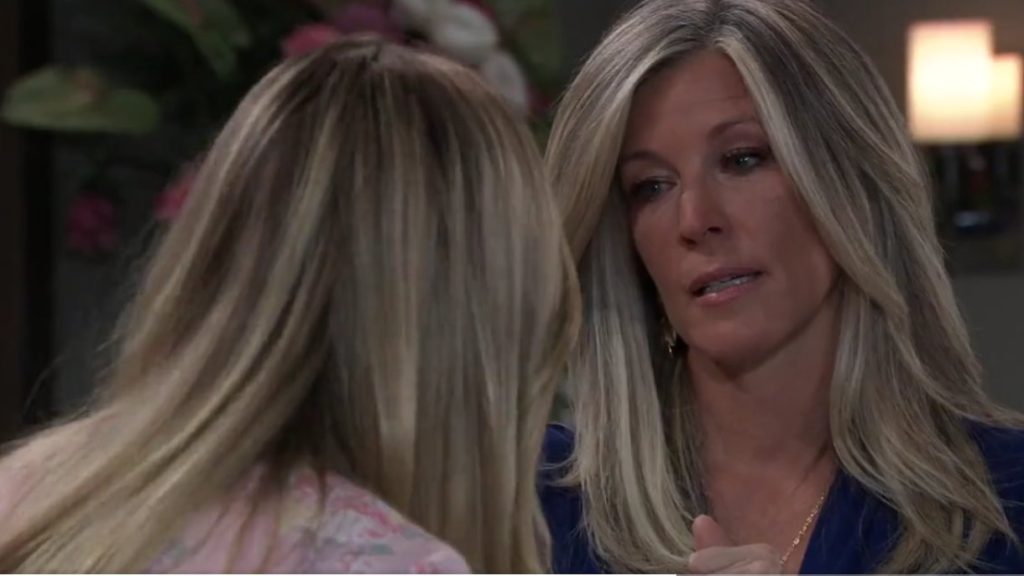 General Hospital Two Weekly Spoilers for August 22 – September 2, 2022, claim that police will land at the charity picnic. As for Olivia, she will introduce a love potion to Leo and Brook. Later, Harrison might also get courage from the love portion and have something to confess to Brook. Elsewhere, Victor might join the picnic exclusively to threaten Ava. Speaking of Ava, she is likely to spill the beans to Spencer. Over with Carly, she will fall deeper for Drew.

Later in the week of August 29 – September 2, 2022, Spencer will have some nightmares while Trina might wait for Rory’s updates. As for Brook, she will try connecting Drew with Carly. And Sonny will get furious over something. Keep reading and find what the storyline has for viewers this time.

This week, Olivia might introduce some sort of love potion to Leo and Brook. They will use it to make a drink and give it to Dante and Sam. However, their ulterior motive is to strengthen the bond between Dante and Sam. Dante might gulp down the drink, and it might make him realize that he is done with going slow.

At the same time, Sam might also drink the portion. This will lead to her giving in to Dante’s demands. This could either have something to do with moving in together or a straight-up engagement. Looks like the potion is super effective!

Poor Harrison might also gulp down the potion by mistake. But afterward. he would gather all his courage and confess his feelings for Brook.

Over with Ava, she might decide to spill the beans about Esme and Nikolas. Spencer will feel disgusted to learn that Nikolas slept with Esme. However, Ava and Nikolas are not going to stop. Even at the picnic, their bickering seems to have not even a speed breaker.

As for Victor, General Hospital spoilers say that he will also join the picnic. However, it looks like he is only there to threaten Ava. Even when Nikolas tries saving her, Victor knows that Ava is also involved in all that Esme cover-up. In the meantime, some dangerous incident is set to happen during the picnic. The police will get an alert and will ultimately land at the venue. What could that be? And also because of whom? We will know that.

Elsewhere, Trina and Rory might connect on stronger ground. Meanwhile, Carly might fall deeper to Drew. She would slowly start realizing and acknowledging her feelings. In the meantime, Terry will also come across someone and feel attracted. But who is that? It looks like Terry might soon have a new love story in line.

In the hospital, Willow will get confirmation of her poor health condition. Britt and Terry will give her options for the treatment. However, she will not want to risk the life of the unborn. Now, Willow can either start her chemotherapy or can delay it. With chemo, the chances of her getting a miscarriage are high. But if she delays it, cancer will spread across her other organs, which might risk her life.

Whatever it is, she will not want to risk the life of the unborn. Afterward, Willow will finally disclose her recent findings to Michael. He will be very shocked but will ultimately support her. It is teased that an explosion might happen during the picnic. In this, Lulu Spencer might get hurt.

It looks like Elizabeth will again get triggered. This will lead to more information about her past and might explain her trauma a little bit. Over with Finn, he will reach out to Liz’s sister Dr. Sarah. Will Sarah be of any help to Finn? We will know that in the course of time. In the meantime, Mason will approach Austin with yet another threat. He wants his cousin to listen to their boss.

Further on General Hospital, Elizabeth will share her ordeal with Nikolas. She will want to take advice from a third party. Even though Nikolas is just a friend, he might not understand Finn’s feelings. However, sharing with someone might help Liz to calm her mind.

Elsewhere, Brook Lynn might help Drew with his feelings. She might try her best to connect Drew with Carly. In the meantime, Anna and Valentin might also open up to each other. Anna will be so done with all the lies and tricks. However, she will decide that it is better to accept whatever version Valentin throws at her.

Over with Spencer, he might soon get a nightmare. However, the question is: does he know anything about Esme or not? Whatever it is, the nightmare might either be about Trina getting married or, even worse – Esme coming back for revenge! Speaking of Trina, she might wait for further updates on Rory. Looks like Rory might have got injured in the picnic incident.

On the other end, Sonny is furious with his family. He will not like the way his family is treating Nina. General Hospital spoilers claim that Sonny will take a stand for her and might even ask his family to behave properly. Whatever it is, fans know that things are not going to change as Nina can never be accepted in the family. GH spoilers tease that the upcoming episodes are going to be more drama-packed. Stay tuned and watch General Hospital, which airs every Weekdays on CBS. For more information on updates and spoilers, visit our website, TV Season & Spoilers.