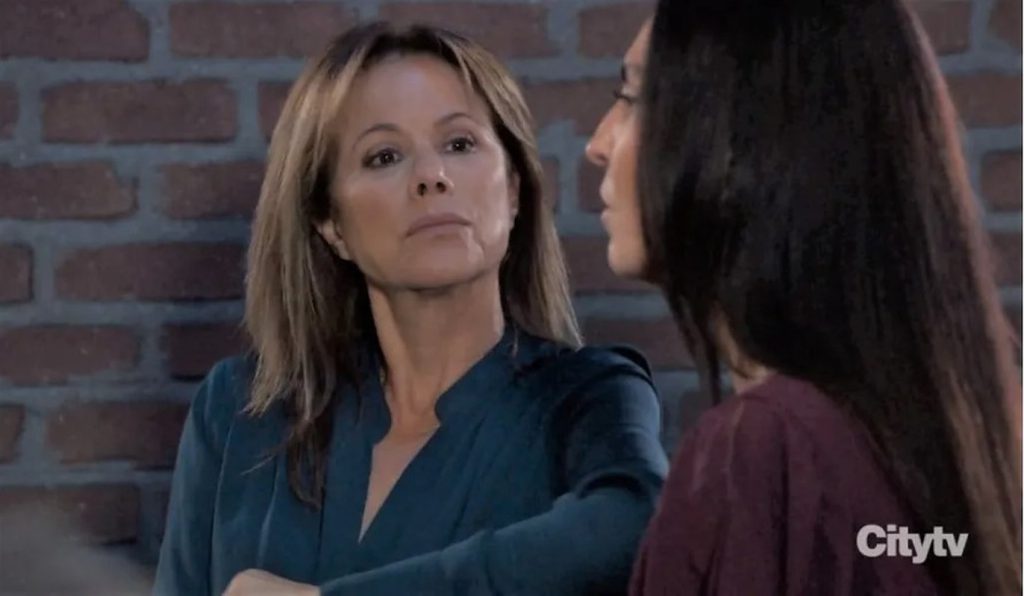 General Hospital spoilers for the week of April 18-22, 2022, are out. And it reveals that upcoming episodes of the ABC soap will be full of drama and trouble. We are in for an exciting week where some characters will argue over their relationships while some characters discover something.

Spoilers suggest that Britt will move forward with her matchmaking shenanigans. Then, Anna will have some news while Valentin apologizes. Viewers will also see Jordan and Curtis as they find something horrifying at the pier. Furthermore, Elizabeth and Portia will get into a heated confrontation this week.

Cameron and Josslyn will also go through a tough time. Finally, Selina Wu will fill in Curtis about Marshall’s past. It looks like we have so much to know. So, let’s dive right into all the storylines.

Starting off the week of April 18-22,2022, Britt will look over some matches that she got from the matchmaking service. She will take Brad’s advice on the same as she sets a date with someone. Viewers know Selina met Britt and told her to convince Brad to join the family business, but she hasn’t yet. Britt might not say anything because she might be nervous about the chances of going back to prison.

Speaking of Britt, she will have a heartfelt conversation with Spencer Cassadine. She will also eavesdrop on a conversation of Drew Cain with someone. It seems like Britt is all over Port Charles this week.

General Hospital: Anna Has Some Updates

Next on General Hospital, Anna Devane will share some updates. She will tell Robert Scorpio and Laura Collins about her French Polynesia trip. He might also mention that Jennifer Smith was framed. More spoilers suggest that Valentin will extend an apology and reveal that he was the mysterious caption. He will also reveal what he did to plot something against Jennifer.

Jordan And Curtis On The Pier

Moving forward in the week, Jordan Ashford will find Curtis at the pier, where he will be mulling over something. The same pier will also be the spot where Alexis Davis will find a dead body – presumably, Brendan will be dead. It looks like Harmony will kill Neil’s brother after he blackmails her.

Speaking of Harmony, she will spend some time with Willow Tait. At this point, Harmony should be covering up Brendan’s murder in addition to other horrible crimes. And GH spoilers suggest that all of this guilt will take a toll on Harmony, who might spill some beans. Regardless. Harmony will be able to hide the truth, and Alexis will be suspicious.

Furthermore, Liz and Portia will get into a heated confrontation about something. Regular viewers know that Liz and Portia are good friends, but Liz is more stressed about the stalker drama. But Liz will apologize to Portia for lashing out. Moreover, Liz will also continue to investigate the stalker. Nevertheless, Portia might likely have a tough week as she will have a confrontation with Jordan.

Later in the week, Cameron will kind of dig his own grave by saying something that he shouldn’t have. Then, Joss will demand answers about what Cam meant. He might dig an even bigger hole for himself. This will lead to a huge fight between the teenage couple.

More spoilers suggest that Sonny will do something to show who’s in charge. He will feel like he needs to prove his authority and might do something to reassure his position as the in charge of the territory. Viewers will also see Nina Reeves threatening Ava Jerome Cassadine.

Further spoilers suggest that there will be an incident at The Savoy which will leave Jordan wondering what happened. Then, Curtis will ask Selina about the deal, and she will hand over the dirt on Marshall. But, Curtis might regret listening to some things. Curtis will be upset that he had learned about Marshall’s past from someone else.

Rounding off the spoilers will be a celebration of Ned Quartermaine adopting Leo. This news will become official, and it will be a celebration time at Quartermaines’. What will happen when Alexis grills Harmony? We will know soon. Until then, Stay tuned. TV Season & Spoilers are your one-stop for all the soap opera news. General Hospital airs on ABC all weekdays. Don’t miss the action.