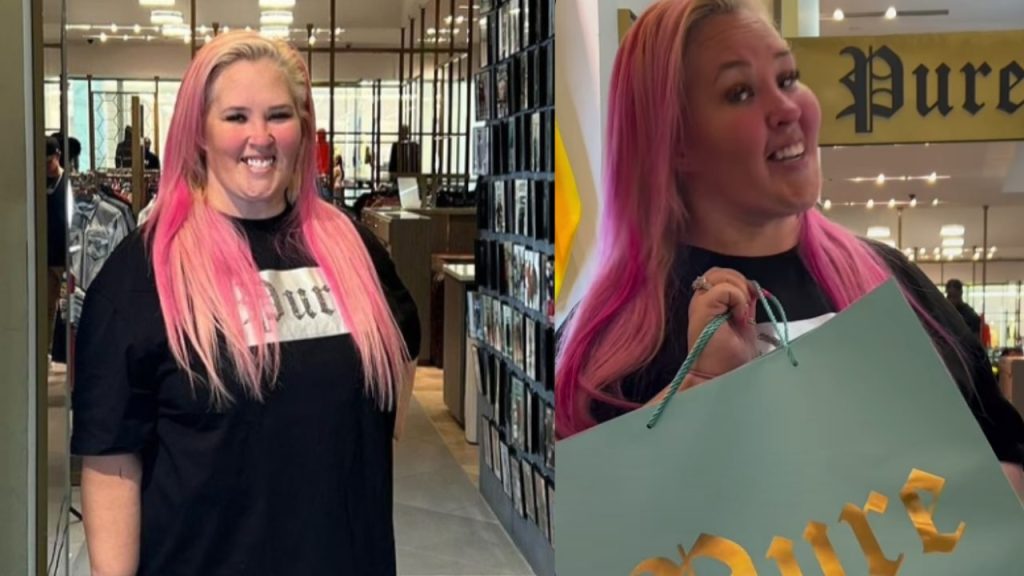 Celebrity transformations are something that usually grab a lot of attention from their audience. Recently, Mama June shocked her fans with a new look. The star has been in the news lately due to her new hair transformation pictures and videos. She revealed her new hair the day after her husband, Justin Stroud, took to social media. He released their short and sweet engagement video. Keep reading to learn more about your favorite star’s hair transformation.

Recently, Mama June posted a video of hers on Instagram in which she was promoting the brand Pure. She was spotted holding a pastel blue color handbag of the brand, which happens to be one of the most luxurious clothing brands in Atlanta, Georgia. Shannon was flaunting the brand’s shopping bag while promoting it, as per Ibtimes. The audience couldn’t stop themselves from noticing the hair change in Mama June. Earlier she had more blonde hair and just a hint of pink color. But now, she has a higher ratio of fluorescent pink in her hair. The star seemed to be happy with her hair treatment and even showed gratitude to her cosmetologist Kelsey Shaye Littleton. June, in her latest picture, was seen posing in an all-black outfit in from of Pure Atlanta‘s entrance, in which her pink hair stood out, and acted as the main character.

The audience had a very mixed reaction regarding June’s hair. “Funny real kinda disgusting and gross,” commented a viewer on her post. Another viewer added, “You should be ashamed of yourself!” Fans feel that these hateful comments are just not for her pink hair. It’s an overall frustration that Mama June

has built up in everyone’s heart. However, there were silver linings as well. Some of her fans really loved her hair! “The pink hair looks so good!” commented one of her fans. Many of her admirers loved her look and even claimed to get it for themselves as well!

Mama June: Happy Anniversary To Mama June As She Celebrates With Her New Husband

Lately, Mama June has been in the news because of several things. Before her hair transformation, she celebrated her six months anniversary with her new husband, Justin Stroud. She took to Instagram and posted a video of her and Justin containing many cute couple-moment pictures. The 43-year-old wrote a huge caption expressing her love. She described her entire journey from becoming friends to life partners.

Though again, there was a mixed reaction to her video. Viewers were really annoyed and concerned for Honey Boo Boo at the same time. Many commented and asked about her daughter. They told Shannon that she wasn’t doing justice to her. Even some mocked her for writing long paragraphs saying that Instagram was now a place to write novels. Still, some of her fans didn’t let her down and supported her. They loved June’s video and loaded it with several comments and wishes on her post. Keep coming back to TV Season & Spoilers