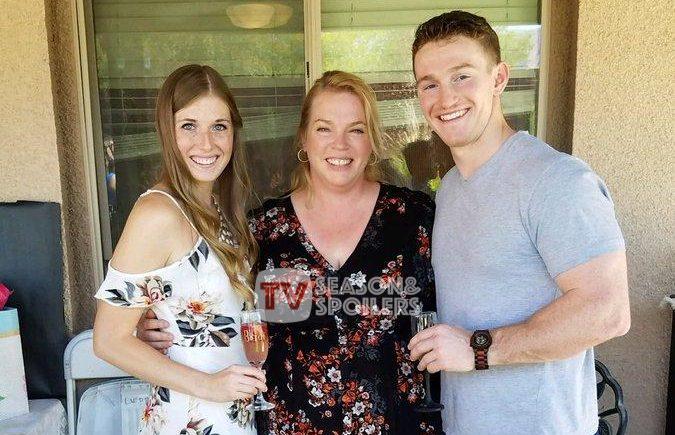 Sister Wives cast members have seen much drama this season. That’s because the rift between the shared husband and his Sister Wives has taken a toll on emotions. However, amid the chaos, the family’s eldest son has something merry to share. The fans are familiar with Janelle’s eldest son Logan Brown. The 27-year-old is pretty ready to settle down with his long-term girlfriend, Michelle. The love birds got engaged in 2017. Now, their wedding date has been revealed. Scroll down to find out more.

Sister Wives: Janelle’s Son Wedding Date, Who Is His Bride?

Sister Wives star Janelle Brown has always supported her children, no matter what the occasion. Now, as Logan’s wedding date is approaching, the mother of six must be excited. Unlike most reality TV stars, Logan keeps a low profile and doesn’t make any social media presence. Hence, it is not easy to get updates about his life. But worry not. TV Season & Spoilers is here to feed you the details. Logan’s fiancé Michelle has posted multiple pictures that prove the couple’s love. More so, the pair looked pretty happy together.

Michelle’s caption was the center of attention, to fans’ surprise. That’s because Michelle indirectly confirmed her wedding date with the eldest Brown’s son. Her caption read, “Hey Logan, you free a year from today?” On top of that, she added several hashtags as well, including “#oneyearcountdown #oct22 #letsgetmeowied.” Moreover, she posted another picture and captioned it, “Hey Logan Brown, you ready to be Mr. Michelle Petty?” Therefore TV Season & Spoilers confirms that the viewers will soon see Logan Brown’s wedding. Michelle’s comment section was filled with love and wished for the to-be-weds. Well, October 2022 is set to be Logan & Michelle’s wedding day.

The reality TV show, Sister Wives, has always focused on the cast members and their personal lives. More so, Janelle’s kids were the main attention of this season. That’s because Kody tried to evict them. However, he couldn’t, and since then, the kids, Garrison and Gabe, have been making headlines. Whether it’s related to Garrison’s house at such a young age or about Gabe’s girlfriend. Hence, they have made their presence. However, in the case of Logan, it is entirely the opposite. The eldest son doesn’t like attention, and he also stays off social media.

Therefore, there isn’t much detail about him on the internet. As per his professional life, he’s a Community Development Manager. We dug into his LinkedIn profile to let the fans know. Furthermore, Logan worked as a business analyst at the University of Nevada before this. As for Logan and his fiancé, they have known each other for a long time. Logan proposed to Michelle

while returning from the concert of their favorite band. The eldest son grasped the perfect moment to propose to his beloved at the Colorado River in Austin, Texas. However, as Logan is private in his personal life, his wedding will not get documented. Stay tuned to TV Season & Spoilers for more.