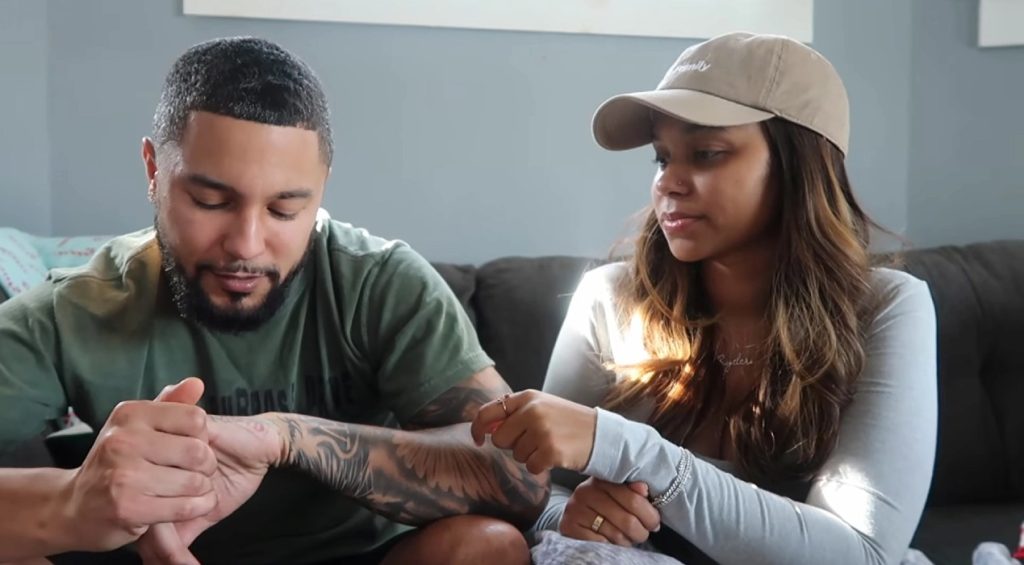 Teen Mom: Cheyenne Floyd & Husband Zach Davis Are Having Baby #3? Is She Pregnant?

Cheyenne Floyd has been receiving popularity for her breast implant surgery. Co-star Maci Bookout jumped bungee in the initial episodes of Teen Mom: Family Reunion and excitedly asked everyone to join. However, the reality-tv star said no immediately because she was scared that her breasts might ‘fall off’. Later, she revealed that she underwent a breast augmentation due to an incident. People who follow the show would know that Cheyenne and her family were shot 13 times in a car. Although everyone came alive without a wound, one of her chest muscles got harmed. Hence, she had to undergo surgery to fix the issue. The entrepreneur is a mother to two children, Ryder and Ace. She shares the former with her ex-boyfriend, Cory Wharton, and Ace with her husband, Zach Davis. Although, a few cues say that the couple might be planning for baby number three. Keep reading to know the deets!

Cheyenne Floyd has undergone a lot of baby drama with her first daughter, Ryder. She and her ex-boyfriend, Cory Wharton, were going through a breakup. However, they hooked up once after Cory filmed Ex On The Beach. However, it resulted in the Teen Mom star’s pregnancy which she kept a secret until six months. Cory expressed his sadness over the issue, but the two moved on and happily co-parented their 5-year-old daughter, Ryder. Cory is now married to Taylor Selfridge, and Cheyenne is hitched to Zach, who recently turned 32.

The two tied the knot in September, and the production made sure to film it. The Teen Mom chapter finale episode, briefly showed their ceremony. A month later, the duo moved to their $2 million mansion in Los Angeles after marriage. Cheyenne made use of the space and threw her husband a decorated surprise. She decorated the hallway with grey crystal balloons and gigantic black glass candles. The décor complimented the black and white theme of her house. Zach posted a picture of the surprise on his Instagram story.

He had clicked a picture of the stairs, which were also filled with balloons and candles. However, Zach naughtily added a caption saying his wife did it again. Additionally, the husband said that he feels that she is going for #3 tonight. Fans were quick to notice this and addressed the speculation that the couple might be giving a try for a third child. The Teen Mom alum also posted a picture of the couple on the occasion of Zach’s birthday. The pair seemed mesmerized with each other and could not seem to keep their hands off each other.

Teen Mom: Cheyenne Spoke About Having A Third Child In Her Recent Podcast!

Cheyenne runs a podcast with the name, Think Loud Crew along with Shanan Cablayan and R. KyleLynn Floyd. While speaking to her co-hosts, she revealed her wish to have a third child through adoption. The Teen Mom alum added that the duo has already started researching the adoption process. She enunciated that the couple spoke about adopting someone near Ryder and Ace’s age. However, they plan to adopt an older child, anywhere between seven and fifteen.

The pair has reached out to agencies and are trying to figure out how it works. Additionally, the Teen Mom alum shared that she does not plan to have another biological child. However, the couple is resistant to adopting someone who has been through sexual abuse or has a sexual background to protect their other two children. For more exciting news updates, stay tuned to TV Season & Spoilers.