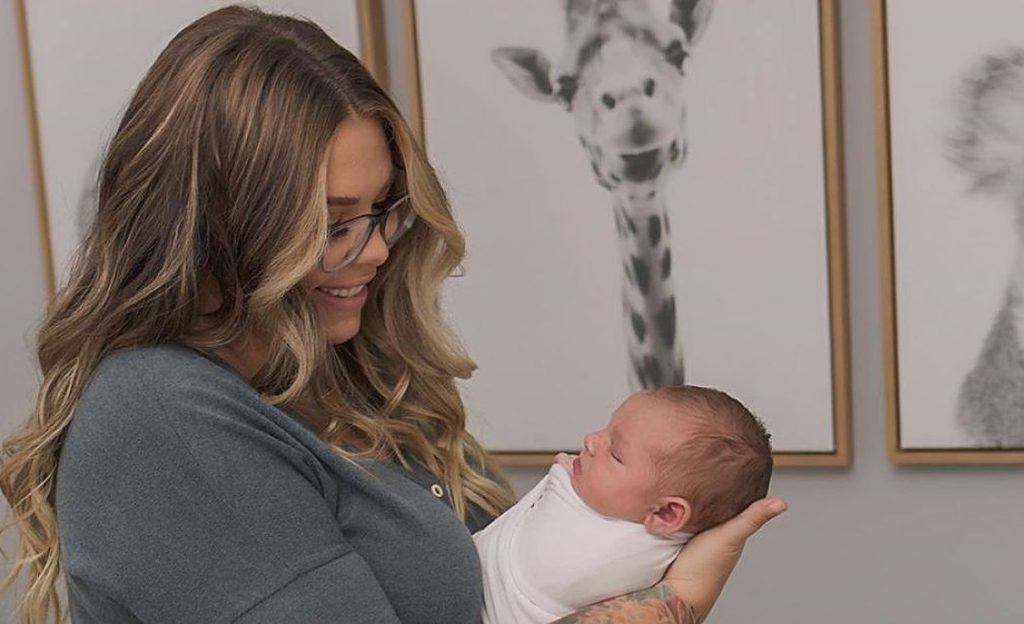 Kailyn Lowry is quite well known as the long-time nemesis of Teen Mom co-star Briana DeJesus. Additionally, the reality-tv star gained fame due to her additional feud with Jenelle Evans, who was her long-time best friend. However, they fell apart after rumors stated Lowry bailed Evans, and the latter refused to pay her the money. The Delaware resident also filed a defamation suit against Briana, which she eventually lost. DeJesus later threw a pink-themed celebratory party to commemorate Lowry’s loss. However, for a few months, the reality-tv star has hit the headlines with a pregnancy rumor. Although she denied all the claims, another proof of a newborn appeared in the fan’s eyes and ears. Keep reading to know the recent change in the former Teen Mom star!

Kailyn Lowry is mother to four kids; Issac, whom she shares with former partner Jo Rivera; Lux and Creed, with her ex, Chris Lopez; and Lincoln Marroquin, with ex-boyfriend Javi Marroquin. The former Teen Mom star is currently dating her live-in boyfriend, Elijah Scott. Additionally, people feel that Kailyn Lowry is pregnant with his baby, owing to a few signs that support this suggestion. In a recent episode of her podcast, Baby Mamas No Dramas, she shared information fans feel is a vital sign of pregnancy.

People who follow the Teen Mom star would know that she co-owns the podcast with her former partner, Jo Rivera’s current wife, Vee Rivera. The two ladies bonded with their children and understood their love languages over time. Further, she revealed that she has recently been getting close to her eldest son, Isaac, who recently turned thirteen. Also, her relationship with her second child, Lincoln, is growing quite well. Although the mother of four has to indulge in many physical activities to bond with her son’s athletic love language.

In an installment of the podcast, she revealed that she has recently lost a lot of weight. However, the fat loss helped her play basketball and indulge with her child, Lincoln. Fans took this information in a pregnancy-directional way and stated that it might be due to giving birth. Additionally, the author took a break from hosting the podcast for two weeks in November. Although Vee noted the reason was exertion and time off for Lowry to spend time with her kids, fans think it was a labor break. People spotted various signs of pregnancy on the reality-tv star.

Teen Mom: What Other Signs Of Pregnancy Did Kailyn Lowry Show During The Past Few Months?

Fans started gathering clues about Kailyn Lowry’s pregnancy. The reality-tv star was seen hiding a stomach bump on several occasions, which fans speculate to be a baby bump. Additionally, ditching the podcast for two weeks gave people leeway about her having a baby with her 24-year-old boyfriend, Elijah Scott. She also took off her acrylic nails, which fans believe to be a sign of taking care of a baby. Further, the best-selling author shared a Super Mario mural which is assumed to be a baby’s nursery.

In a Tik-Tok video, the former Teen Mom star was seen sitting across a pool under a blanket in thirty-degree weather. She wrote that her kids were in a pool while she was just sitting. Followers felt that the blanket was a cover-up for her pregnancy. They took to her comment section to share their assumptions about a baby. However, Kailyn Lowry denied all the allegations and fumed by responding, ‘Absolutely Not’. For more exciting news updates, stay tuned to TV Season & Spoilers.