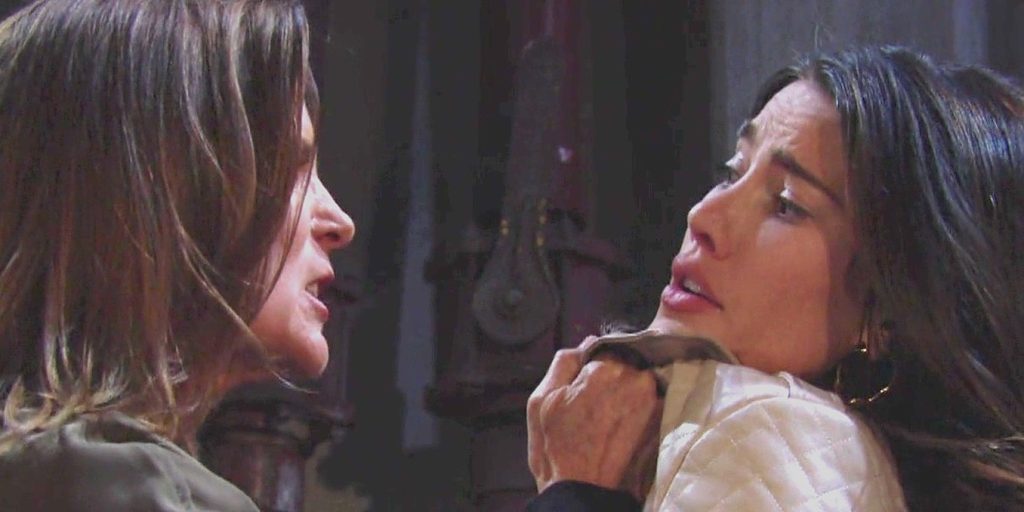 The Bold And The Beautiful: An Enraged Sheila Strikes Again, Steffy And Finn In GRAVE DANGER

After nesting at Deacon’s apartment for too long, The Bold And The Beautiful spoilers tease that Sheila will be done hiding. Looks like Sheila will now want to unleash her wrath and go after her dreams to get back with Finn and Hayes. But before that, she will want to sort things out with Deacon. Sheila likes Deacon and Deacon likes Brooke. Will Sheila now target Steffy for Brooke’s single status, which helped Sheila to come closer to Deacon? Keep reading to know what might happen in the storyline if Sheila takes this turn.

The Bold And The Beautiful November sweeps 2022 spoilers teased that Sheila is going to strike back. As far as we know, Sheila’s sole desire is to get back with Finn and Hayes. And for that, she can go to any extent. Earlier, Sheila pulled the trigger at Steffy, but Finn took the bullet for his wife. And the rest of the torture given to Finn by Sheila is something fans are well aware of.

Looks like Sheila will again create some situati ons where she will land in Steffy and Finn’s orbit. Either she will disguise as Lina and try to come closer to them or will sneak into the cliff house again. Whatever is possible. However, the November sweeps spoilers teased that Finn and Steffy will be in grave danger. What will Sheila do to put Steffy and Finn in grave danger? Let’s discuss that.

The Bold And The Beautiful Spoilers: Finn & Steffy In Grave Danger

All this while, fans know that Sheila’s top most priority has always been to get back with Finn and Hayes. However, the fans might notice that The Bold And The Beautiful has given a twist in the storyline. When Sheila noticed Deacon’s interest in Brooke’s single status, she got jealous. So, it is pretty obvious that Sheila like Deacon now. In soaps, being friends itself can result in relations sometimes. Over here, Sheila is nesting in his house past few months, why won’t she be jealous?

Now, this might be the biggest twist: Sheila might want to take revenge on Steffy! Why? Well, when Sheila learns that Steffy is the person who broke Brooke’s marriage, she will fume in rage. Since Brooke is single now, that is precisely why Deacon is going after her. When Brooke was all happily married, Sheila was able to make moves on Deacon. Fans might remember the romantic nights and surprise dinner plans. Even though it was Sheila’s way of convincing Deacon, it did play a role in making Sheila like Deacon. So, seeing the same person crushing over his former flame will make Sheila uneasy. And then, the ring will make her furious even more.

As for Sheila, she doesn’t know that Deacon has already got rejected. So, all this will ultimately help Sheila in blaming Steffy for everything. If she hadn’t planned to reunite her parents, Deacon will still be in control of Sheila. So, this might lead to Sheila unleashing her wrath on Steffy. What will Steffy do? Fans might remember the time when Steffy decided to take revenge on Sheila for torturing Finn.

Now, if Sheila comes to strike back, it will surely put Steffy and Finn’s life in grave danger. Finn has had enough of her torture. So, seeing her again might mentally torture him. He might get anxious, and all those traumatic memories might rush back in his mind. As promised before, will Steffy be able to save herself and Finn this time? Would Sheila end up in prison soon? Stay tuned and watch The Bold And The Beautiful, it airs every weekdays on CBS. For more updates and spoilers, visit our website, TV Season & Spoilers.