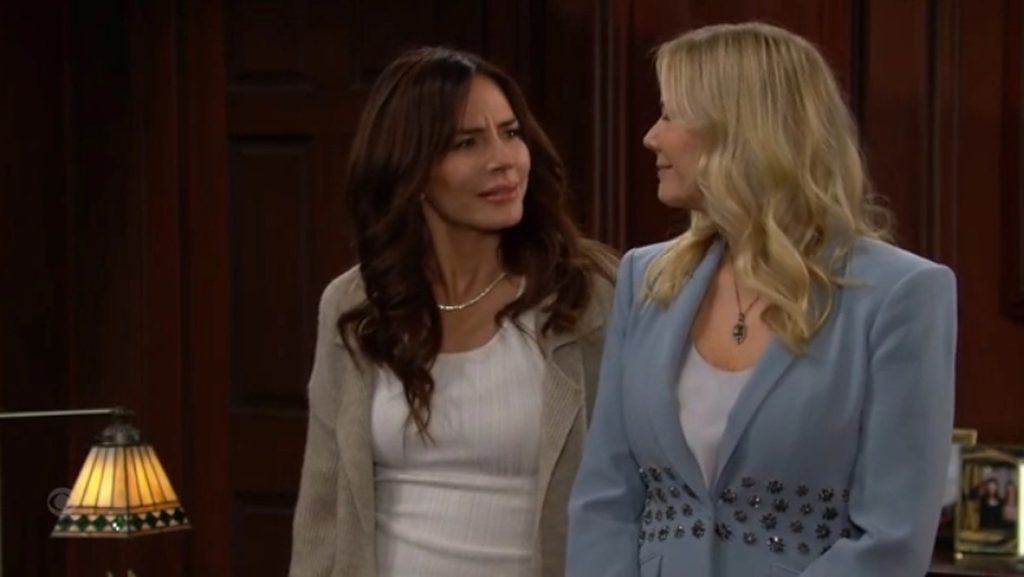 The Bold And The Beautiful: An Unexpected Duo Kisses, Is It Brooke And Taylor?

The Bold and The Beautiful is rolling out power packed episodes one after the other. So much has happened in such quick succession that the audiences have been on the edge of their seats literally! Moreover, the CBS soap has no intentions of slowing down anytime soon! The latest The Bold and The Beautiful spoilers tease that an absolutely unexpected couple is going to share a kiss in the upcoming episodes. However, no hints as to who the couple could be. But, we netizens have some ideas of our own! Take a peak?

Bill Turns away from Sheila and Kisses Li?

While the first thought in our head that popped up was, oh! Bill and Sheila kiss again! However, emphasis on again. They have already done it on The Bold and The Beautiful and Bill is moving mountains fo her as we speak, so that’s not really “unexpected”. Not anymore, atleast. We mean, it was certainly abrupt and unexpected when it happened the first time! No one saw it coming. But well that ship has sailed now. So it has to be some one else.

Li Finnegan has freshly returned to Los Angeles. She even paid Sheila a visit in prison on The Bold and The Beautiful. Long time viewers know Bill and Li have a tiny bit of history and a lot of chemistry! Back in the day, when Bill saved Li’s life, they shared some really electric moments. So, if Bill turns his back on Sheila and locks his lips with Li, he can redeem himself. He has really been earning a lot of backlash, but all will be forgiven if he ditches Sheila and get on with a woman like Li. That would be completely unexpected but totally delicious!

Will The Bold And The Beautiful Get Bolder By Bringing Brooke And Taylor Together?

Ever since the spoilers of an unexpected couple kissing on The Bold and The Beautiful broke out, one speculation is burning up the internet. Brooke and Taylor sharing a passionate kiss! If that happens, it would certainly be a crackling bolt of thunder! Agreed, neither of them has shown any interest in female partners till now, but many people discover more and more about their sexual preferences at a later age. Sometimes, it happens situationally. It would make for a tantalizing twist in the stories of Brooke-Ridge and Taylor for sure. However, how it will be received by the audience is a different story.

Ever since, the discussion started, The Bold and The Beautiful fans are divided in their opinion. While some feel it would be really interesting to watch and add a new flavor to the story, some find it utterly distasteful. A fan believes that if The Bold and The Beautiful makes Brooke and Taylor kiss, she will stop watching the soap. She says that this is not the soap she signed up for, she preferred it when the show was “cleaner”. However, that is debatable in our opinion. As another viewer pointed out that B&B has done much more questionable things before. For example, Steffy sleeping with Bill, Liam’s father, while she was still married to Liam.

There is also a section of netizens that are thrilled by the idea of Taylor and Brooke possibly kissing on The Bold and The Beautiful. Which team are you on? Would you be okay with Brooke and Taylor coupling up? Please share with us in the comments. Meanwhile, stay tuned to the upcoming episodes to see whether or not the soap gets more daring.