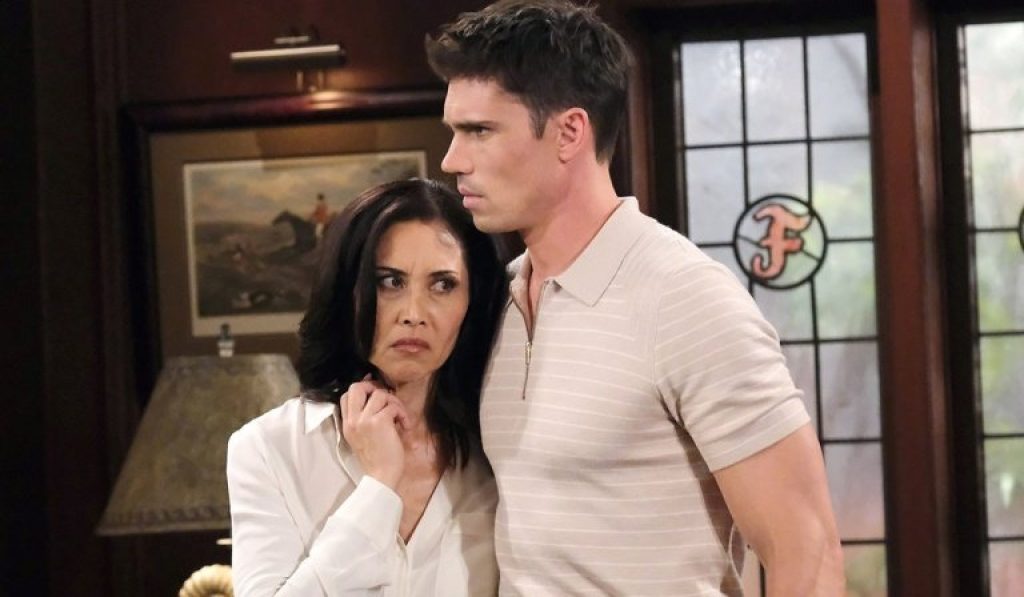 The Bold And The Beautiful: Finn EXPOSES The Truth, Tells Li About Taylor

The Bold And The Beautiful spoilers tease that Li might also join the secret circle. Till now, only Taylor, Finn, and Steffy know about Bill’s true color. However, Finn might be unable to keep secrets from his adoptive mother and spill the truth to her. Will Li finally know the real reason Finn and Steffy are thinking to press charges against Sheila? Let’s discuss what might happen.

Bill Threatens Steffy-Finn To Keep His Partnership A Secret

Last week, The Bold And The Beautiful spoilers showed how Bill turned out to be Sheila’s secret supporter and partner-in-crime. Steffy and Finn were shocked to the core to see Bill barging into their house to help Sheila. Things got more chaotic when Steffy was trying to call the cops on Sheila, and Bill stopped her from doing it. He reminded Steffy of her past and threatened her.

Looks like years back, Taylor shot Bill in the back, and Steffy begged him to stay silent. Although Bill chose to leave the problem then and there, he certainly will use it in the future. He threatened Steffy that if she presses any sort of charges on Sheila, he would do the same with Taylor and make sure she also ends up in jail along with Sheila. Once Steffy’s past haunted her, she was ready to listen to him since Taylor’s freedom and safety was more important.

As of now, only Steffy and Finn know that Bill and Sheila are in a partnership. If Steffy tells this to someone, it will start spreading like fire. So, to keep everything going stable, Steffy and Finn chose to keep mum. But will the secret remain one in the future? Let’s discuss what might happen next.

The Bold And The Beautiful Spoilers: Secret Is Exposed! Finn Tells Li

Fans know, as for now, Taylor, Steffy, and Finn know what all happened the night Sheila got arrested. However, things have never remained a secret, especially in soaps, will Bill’s secret ally and Taylor’s crime will remain under wraps? We doubt that. As for now, Steffy and Finn are pausing their moves since they want to think properly and decide their next move. Steffy has decided to prioritize her mother’s safety over Sheila’s mayhem.

Even though Finn was the one who experienced her wrath, he still wants to support his wife. In all this, everyone will be confused with what they are trying to do. Instead of pressing charges on the she-devil, the family may think why Finn and Steffy are choosing to keep mum. Things will get more hard to explain if Li may confront Finn and Steffy

B&B fans know the amount of problems Li faced when she was involved in Finn and Sheila’s fight. She was chased by the she-devil, and her car also exploded, causing her many injuries. So, she will definitely worry about what is going on with Finn. Chances are that Finn might decide to spill the beans since it is the least he can do for the person who risked her own life for him. Once Li learns about Taylor’s crime and Bill’s true face, what will she do? We will know that. Stay tuned and watch The Bold And The Beautiful, it airs every weekday on CBS. For more updates and spoilers, visit our website, TV Season & Spoilers.