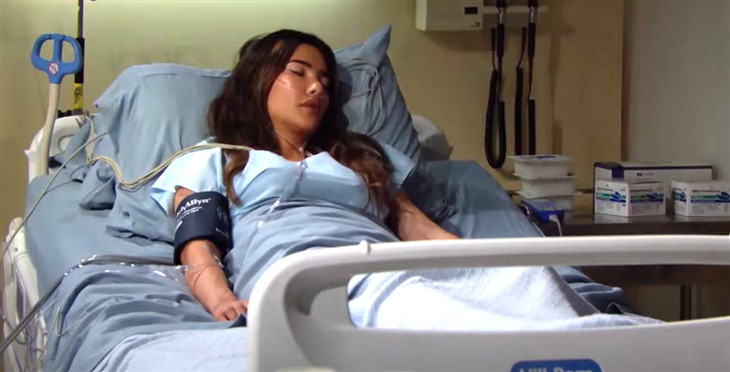 The Bold And The Beautiful Preview Video For The Week Of April 4, 2022, Is Out! Steffy & Finn Fighting For Life

The Bold And The Beautiful preview video for the week of April 4, 2022, is out. And it reveals that viewers are in for a lot of emotional scenes this week. Viewers will see some hospital scenes, which means Steffy and Finn might be in a dangerous situation. In addition, the families of the two will be seen struggling in the upcoming weeks. What will happen there? Keep reading to find out.

The Bold And The Beautiful: Steffy And Finn Fighting For Life

In the preview, viewers can see some police officers and paramedics at the crime scene. We can hear someone saying, “two gunshot victims-critical,” but only Steffy is seen entering the hospital along with a doctor and nurses. B&B spoilers suggest that Finn might be announced dead on the spot of the crime.  TV Season & Spoilers recently reported that Tanner Novlan, who plays the role of Finn, will be exiting from the show. The makers have decided to kill the character, and this looks like the perfect way to do so.

Later in the preview, we see clips of only Steffy and how all of this is affecting the Forrester family. Viewers also saw Taylor putting her head on Ridge’s shoulder and crying. They rushed to the hospital once they found out what happened behind the dark alley of Giardino II. Moreover, viewers might see Bridget offering updates on Steffy’s condition and will do everything she can to treat Steffy. In the clip, Taylor wonders what kind of monster would shoot out their daughter.

Rounding off The Bold And The Beautiful preview, Sheila Carter will hope that nobody ever finds out what happened. Things will worsen for Sheila when the truth about shooting Finn and Steffy comes out. The spoilers also reveal that Brooke’s plan to get back with Ridge might face a major block. Ridge will want to be around his family for obvious reasons during this difficult time.