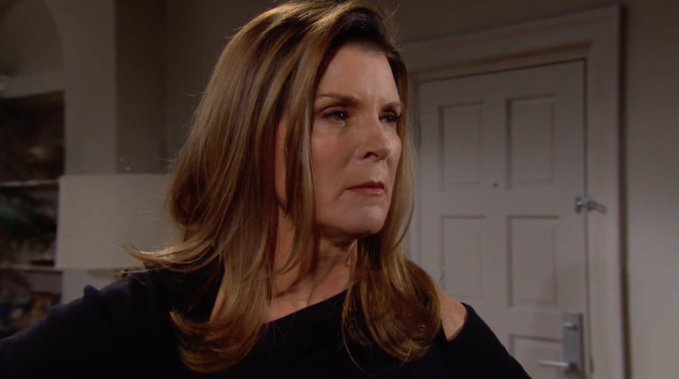 The Bold And The Beautiful: Sheila Frames Deacon For Finn & Steffy’s Condition, Throws Police Off The Trail

The Bold And The Beautiful latest spoilers suggest that the CBS soap is becoming darker and more dangerous by the day. Viewers know that Steffy and Sheila had a heated confrontation, leading to disastrous results. Now that Sheila has shot Steffy and Finn, she will definitely try to put the blame on someone else. But who will be that person? Keep reading to find out.

For starters, The Bold And Beautiful viewers know that Steffy confronted Sheila for pushing Brooke off the wagon. She also told her that Sheila has not changed and she never will. Steffy even mentioned that she would tell the dirty secret to everyone, including Sheila’s son, Finn.

Then, Sheila got furious when Steffy was screaming right in her face. She shouted at Steffy to keep her mouth shut. Sheila also intimidated Steffy and tried to scare her. Then, she took out a gun to shoot Steffy, but Finn reached on time and jumped in front of the bullet to save his wife. But somehow, Steffy and Finn both got severely hurt, and now Steffy is at the hospital.

Sheila Blames Someone Else, Who Will It Be?

The Bold And The Beautiful viewers know that Sheila took all the valuables to make the shooting look like a horrible robbery. Sheila killed her own son and still doesn’t feel guilty about it. So, she might still try to hide all of this. There is a possibility that Sheila will get caught. But she will do everything to protect herself. And in order to do so, Sheila might try blaming someone else for shooting Finn and Steffy.

The speculation is that she might blame the bar’s bartender, who knows the Forrester family very well and was on duty that night. However, the storyline would become more interesting if a more prominent character is blamed. So, Sheila might put all the valuables somehow near Deacon, so that he becomes a suspect.

The police on soap operas are never too smart, and they always catch the wrong suspect. So, there is a possibility that Deacon might be put behind bars for shooting Finn and Steffy in the upcoming weeks on the soap. B&B viewers know that Sheila is a devious psychopath who would do anything to protect herself.